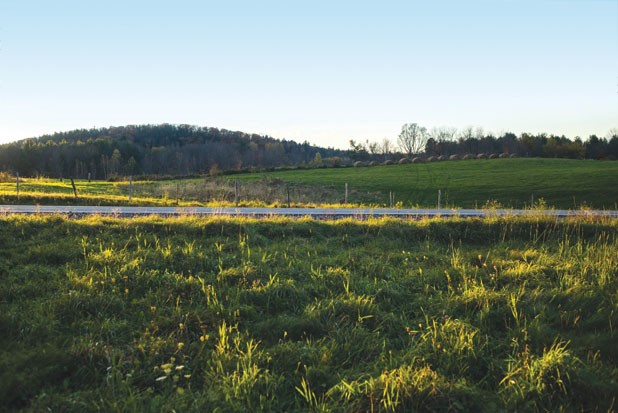 Shortly after the late Mary “Alice” Rivers donated her property in Jericho Center to the local fire department in 1986, she articulated her vision in writing: She wanted the 125-acre parcel to remain “as close to as God made it” — in other words, undeveloped.

Now, 10 months after Rivers’ death at age 91, the mostly volunteer members of the Underhill Jericho Fire Department are moving ahead with a plan to sell the land she donated with no restrictions on its development rights. That’s got some residents in the Chittenden County town of 5000 questioning the motives of the firefighters and the fate of the prime, scenic real estate that locals call the “gateway” to Jericho Center.

More than 70 residents have since joined a Facebook group called Save the Rivers Property in Jericho VT. Others are exchanging messages on the Jericho Front Porch Forum.

Ultimately, though, the wishes and opinions of Jericho residents will have no bearing on the fire department, which operates as a nonprofit, independently from the municipal government. Despite the fact that it derives 60 percent of its budget from the local townspeople, the fire department has the final say on the property, which is zoned as a “rural residential” district. Potential lot sizes range from quarter-acre to three-acre lots but could be as small as a 10th of an acre and a third of an acre, respectively, if the property were developed as a planned residential development. The property also includes an Act 250-permitted gravel pit.

Complicating the small-town drama is the clash between those who insist Rivers wanted her land left undeveloped and those who say her gift should be managed for the maximum financial benefit of the department.

“She definitely, ’til the day she died, wanted it open,” says Corinne Thompson, who lives about a quarter mile from the Rivers property and knew Rivers and her late husband, Don, for decades. “The minute she died, I knew this would happen,” says an audibly disappointed Thompson. “It breaks my heart.”

Here’s the odd part: The Underhill Jericho Fire Department has hatched a plan to cash in on its inheritance and keep the land undeveloped. The department plans to list the property for the bizarrely high price of $5.3 million — more than six times the land’s assessed value of roughly $800,000. In interviews with Seven Days, as well as at a selectboard meeting earlier this month, fire department officials said the department hopes to attract an out-of-state buyer to buy the parcel and move to Vermont.

“Maybe they live in New Jersey, maybe they live in Dallas, Texas,” says former fire chief Randy Clark. “They have been crowded out by development … and they just want to move to Vermont because it’s beautiful here … The wife says, if you will build me a house to my liking, I will move to Vermont. So the guy says, ‘Great, that’s not a problem. We’ve got 125 acres.’”

But that theoretical buyer — and vague assurances from Clark that “I think it’s going to be the best for everybody involved” — haven’t convinced Jericho residents that the future of the Rivers property is safe. For many in town, the fire department’s plan raises more questions than answers.

“Will there be any kind of legal binding that [a buyer] will keep it just the way it is, or you’re saying they can do whatever they want?” asked selectboard member Kim Mercer at the October 3 meeting. “Why can’t [development restrictions] be part of the sale? Because you won’t get as much?”

The firefighters in the room confirmed that accurately represented their logic.

A realtor at the meeting was equally skeptical. The fire department, as he put it, seemed to imagine a buyer with “more money than brains.”

“Frankly, they don’t exist,” he said.

Rivers donated her property to the fire department on Dec. 31, 1986, a few years after she and Don gave the department a three-acre parcel on which to build their current firehouse in Jericho. Clark says both gifts came after years of dedicated service from the department. They’d put out grass fires for the Riverses, rescued a bull from their well and pulled a heifer from their farm’s manure pit.

“I don’t know how many times Mr. Rivers almost burned that barn down,” says Clark with a chuckle.

Clark says he was at Rivers’ kitchen table when she agreed to donate the land to the department. After her husband Don died, the firefighters had heard that Rivers was considering selling part of her farm. Clark says a small group from the department approached her about potentially purchasing some of the property. Instead, she offered to donate the entire parcel and signed a document that spelled out the agreement on the last day of that year. The only other signer was David Tillotson, a friend of Rivers’ who was the fire chief at the time.

A copy of the agreement, located in town records, shows that Rivers reserved her home and a three-acre parcel in a “life trust,” for her own use as long as she was alive. The agreement stipulated that any money raised from the potential sale of the land be placed in a trust, from which only interest could be used by the fire department.

The document also established the Rivers Land Committee, which would comprise members of the fire department, Jericho citizens and Rivers herself. It was in an October 1987 letter to her fellow committee members that Rivers put her wishes for the land in writing, requesting the land be left “as close to as God made it.”

“I believe that, with the help of the Vermont Land Trust, and the Underhill and Jericho Fire Dept, plus interested members of the community, we can have a lovely park area that would be a true and listing [sic] asset to the community,” Rivers wrote.

Clark remembers that memo. It’s tucked into a four-inch-thick binder he keeps with notes on the property. But he says that the idea to build a park was just that — an idea, one of 23 the committee considered.

“That was her vote, if you will,” says Clark.

The current members of the Rivers Land Committee — the third convened in 27 years — are all firefighters. They maintain that selling the Rivers property would be the best move for the department as a whole.

Describing it as a “win-win situation for everybody,” Clark notes that income generated by the sale would go into a trust, as the 1986 agreement suggested, and interest from the trust would directly defray department costs. (Both he and Fischer suggested “10 percent” as a possible return on that investment; if the land sold for $5.3 million, coincidentally, the interest would be the same amount as the department’s current budget.)

For comparison: UJFD’s budget is roughly comparable to what is allocated for firefighting in Williston, where the department responded to nearly 800 fire calls in 2012 compared to roughly 350 by UJFD in the 2012-2013 fiscal year.

“I don’t understand why our nonprofit fire department is pushing so hard for extra profits when they have no financial need for it,” says Mike Kramer, the Jericho resident who organized the Facebook group to preserve the Rivers property. “I was shocked on a moral level, but also looking at the financials — I just don’t get it.”

Kramer says he’s most offended that the department would seemingly disregard the wishes of their donor. But he’s also concerned that the fire department is pushing ahead with its decision without incorporating meaningful feedback from the town it serves.

“We all know what Alice Rivers wanted, and it’s not a question of legal versus illegal, or private company versus public company,” he says. “It’s just right and wrong.”