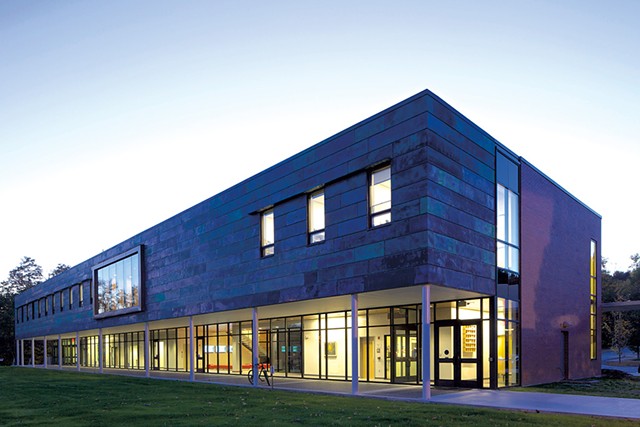 Colleges regularly add to their architectural footprints, creating campuses that can span a couple hundred years or more. But the placement, forms and uses of such additions inevitably court controversy, especially when they're inserted among buildings of historical importance.

Witness the brouhaha over Tod Williams and Billie Tsien's proposed expansion of Charles Moore's 1985 Hood Museum of Art at Dartmouth College. The firm's plan to eliminate the postmodernist architect's ceremonial gate and separate his structure from an adjacent 19th-century building, among other intentions, has raised the ire of Moore fans two years before the building's projected completion.

In Putney, Landmark College just made an addition of its own. In theory, there's nothing particularly disruptive about its new STEM building, but its design raises questions about how much the plans of the past are worth preserving.

A single architect, prolific modernist Edward Durell Stone, designed the entire half-century-old campus. His vision for Landmark was much like Thomas Jefferson's design for the University of Virginia, but modern. Renderings dating from 1960 show neoclassical buildings placed symmetrically around a rectangular colonnade that encloses a quad.

Funds were lacking, however, to construct all the buildings that Stone had planned. As a result, Landmark's campus has "blank spots." Common sense would dictate filling those gaps with new buildings in Stone's style, or something like it.

With its Nicole Goodner MacFarlane Science, Technology and Innovation Center, or STIC, Landmark has indeed filled a "hole" in its original master plan. Yet the building bears little relation to the historical context that shaped the rest of campus.

Or is STIC intimately related to that context? It depends on whom you ask.

The question of what makes a successful addition came up when Seven Days elicited the thinking of the two architectural firms that collaboratively designed the STIC: Breadloaf Corporation in Middlebury and Fradkin & McAlpin Architects in New York City. We also spoke with the original architect's son, Hicks Stone. A practicing architect in Roxbury, Conn., he wrote Edward Durell Stone: A Son's Untold Story of a Legendary Architect (Rizzoli, 2011) and regularly gives talks about his father's aesthetic legacy.

First, some history. Landmark, which serves 450 students with learning difficulties, began as Windham College, which opened in 1963 and would go bankrupt by 1978. When the elder Stone designed the campus, he was an architect of international stature. He was known to the public from a turn on Time magazine's cover and to the architectural world through early projects in the so-called International Style. Notably, Stone codesigned the 1939 Museum of Modern Art in New York.

By 1960, he had moved on to a more decorative and luxurious style, as seen in his design of that era for the John F. Kennedy Center for the Performing Arts in Washington, D.C. The Windham plan's formal grandeur and white color scheme echoed that larger project, but in whitewashed brick instead of marble.

When Landmark purchased the campus in 1984, the bricks were stripped of their white paint to reduce maintenance costs. But the existing buildings retain their sense of formality, with alternating ground-to-roofline brick strips and darkened windows that mimic the verticality of the colonnade's repeating brick piers. Rooflines include a flat, projecting cornice pierced with rectangular slots. The campus' defining feature, the rectangular colonnade, remained a partial U-shape owing to the missing buildings.

One of those blank spots, where the anchor building of the quad was originally planned to sit, is now the site of the STIC building. It is long and narrow, as intended, and serves as the campus' entry point. But on the quad side, where Stone's colonnade was meant to extend along the façade, STIC instead sports a row of thin, irregularly spaced concrete columns along a recessed first floor. Spacing of the columns was dictated by the offset placement of interior elements, such as the lobby and a windowless prep-lab area.

The quad-facing façade also has no brick. Instead, the upper floor is clad in pre-patinated copper panels made by Construction Consumer in Milton. Facing an array of uniformly brick buildings, the cladding thus makes an unequivocal statement of modernity. An eyebrow ledge lines a row of windows that is interrupted on the right side by a large, slightly projecting plate-glass window — the lobby — and a windowless stretch of copper cladding.

The opposite side of the building serves as the entry to the campus; visually, it accomplishes a number of things. Brick makes its appearance here as a huge, façade-size frame. Inside it, the main feature is an off-center, two-story glass curtain wall containing the entry doors and affording a view through the building to the quad on the other side. Rows of ribbon windows of irregular lengths, set in more copper cladding, fill the rest of the frame.

Attached to the left side of this façade is another colonnade of concrete columns. It continues beyond the building's northwestern corner and then ends abruptly, pointing the way to the upper campus. The building's ends are brick, each accented by a single, narrow vertical window strip — off-center, like all of the building's elements.

These aspects resonate with Stone's design for the campus building exteriors, yet the STIC has an overall horizontal emphasis that contrasts with the verticality of Stone's buildings. Its quad façade is clearly meant to stand out from, rather than blend in with, its brick neighbors. And, while the building echoes certain Stone details, it does so only in an abstract and minimalist way.

Stone's son would have preferred a structure that "calls less attention to itself" and complements his father's work through the use of brick façades and symmetry, he said in a phone call. In a six-page photo essay he voluntarily wrote in response to Seven Days' query, the younger Stone noted that his preference would have been to honor the original neoclassical-influenced design for the campus. He traces that influence not just to Jefferson but to the 18th-century French neoclassicist Claude-Nicolas Ledoux.

Landmark's STIC, Stone wrote, "partially recoup[s] the original concept" with its placement. But an architect with "established neoclassical credentials" might have done a better job of "extending and elaborating Father's design vocabulary."

Neither Bennett Fradkin nor Breadloaf's Chris Huston is neoclassical in his approach, but each has significant credentials in historical architecture. Breadloaf has managed Landmark's master plan for 20 years with the help of the firm's specialist in historic preservation, Paul Wyncoop. Fradkin's firm has completed several projects in historical contexts, including interior renovations to Edward Durell Stone's 1937 Rockefeller Apartments in New York City. The father of a Landmark grad, Fradkin was brought in by Landmark president Peter Eden after the two discovered they shared an interest in the campus' architectural history.

Both architects said they started with Stone's plans. Said Huston, "The problem of completing a midcentury historic campus quad was definitive in this project." That is, the insertion of a new build into a historic setting was the primary consideration. (The building doesn't actually complete the quad, which is still missing elements.) And, Huston added, "The colonnade is such a powerful organizing element. We knew that power."

But the firms had other considerations, too. Significantly, they were working with a $10 million budget. (By comparison, the University of Vermont's STEM building, to be completed in 2018, is on track to cost $104 million.) Landmark's STIC was built to accommodate students of life sciences and computer sciences who previously had worked in labs in the fine-arts buildings. The building also houses the Landmark College Institute for Research and Training, which studies ways to educate students with learning difficulties.

Finally, this was the college's first new building since Windham days; it needed to make a statement. STEM buildings have become a key way for colleges to increase their competitiveness in the past decade. Such a building is, essentially, a declaration of an institution's investment in innovation.

After placement was decided, the most pressing question for the architects was whether to extend Stone's colonnade around the quad side of the building. Fradkin recalled, "We had looked at [that], but the conclusions were that, one, that would cost a lot of money out of what we had for the project" — according to Huston, three quarters of a million dollars. "Plus, it seemed like part of the past," Fradkin added. "This is a science building, and it's about the future."

Today's STEM buildings are often "techy" in appearance, he said, to make visual reference to the innovation going on inside.

A brick façade facing the historic buildings would have been too "heavy," Fradkin continued. The best additions to historic settings, he said, "create a dialogue." The new building should clearly appear to be "done at a different time but also tied together [with the historic setting] in terms of function, experience and planning."

Huston concurred. "If we were to try to replicate some of Edward Durell Stone's detailing, that would be wrong," he said. "We were trying to clearly differentiate the old from the new."

Historic preservationist Devin Colman, who is the Vermont state architectural historian, preferred not to comment on the STIC building. In general, he said, "We don't recommend trying to build a new building to look old."

What counts as a successful addition to a historical site is "so subjective," Huston commented. It varies not only from architect to architect but from client to client.

As Colman noted, historical significance accrues with time. Such is the case of, for example, Leunig's Bistro & Café in Burlington, an 1820s building that gained an art deco upper façade in the 1920s. Now the juxtaposition of styles accounts for the structure's historicity and charm. "Maybe in 50 years," Colman predicted, "Landmark's STIC will be an essential element of the whole — different but inseparable from Stone's plan."

One thing is certain: Students in that STEM building have an opportunity to learn something about architectural history as well as innovation.

Learn more about Landmark College at landmark.edu. See more images of the STIC building at fradkinmcalpin.com.

The original print version of this article was headlined "Past Perfect?"