Landfill: Bristol Aims to Load Up Dump Before It Closes 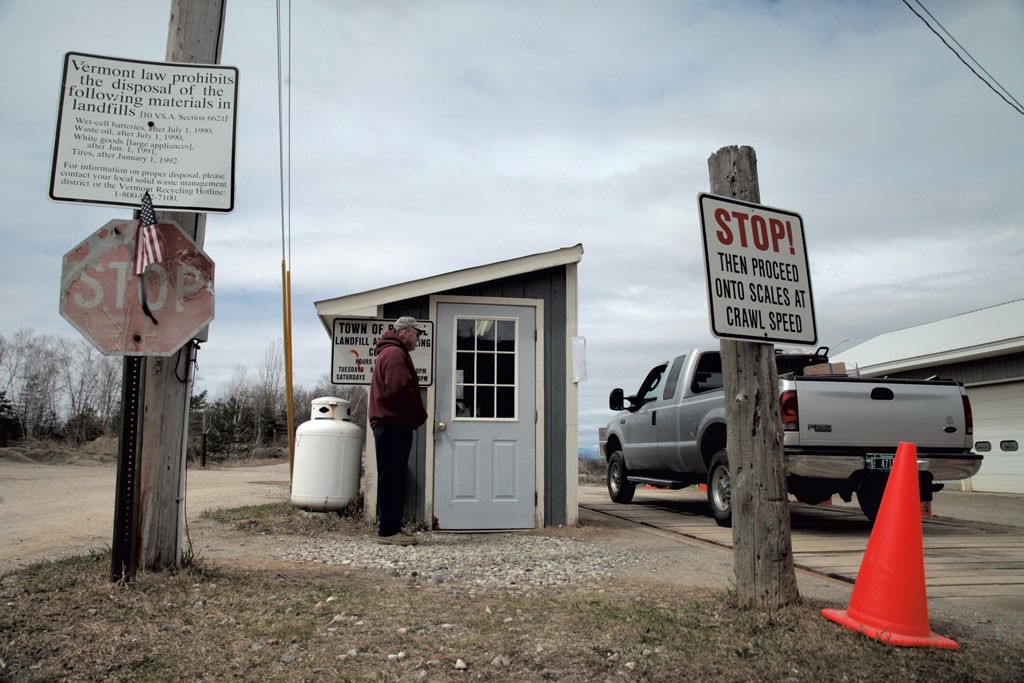 The Bristol landfill was buzzing with activity on a recent Saturday morning. A pickup truck dropped off a large load of old toys and furniture. People added black 30-gallon trash bags to a pile that would be bulldozed, compacted and then covered with a fresh layer of dirt at the end of the day. At the recycling drop-off, neighbors paused to chat.

Officials in the Addison County mountain town say their dump is a beloved social hub. So why is it closing in 2016, 13 years ahead of schedule?

The dump is bringing in less trash — and less cash. Increasingly, Bristol residents are hiring trash haulers to pick their garbage up curbside and truck it to the state's commercial landfill in Coventry.

Bristol ran into trouble with the Vermont Agency of Natural Resources last year for insufficient contributions to the landfill's closure fund, a state requirement. So last fall, the selectboard decided shut down the nearly five-acre dump by the end of 2016.

But if some Bristol officials have their way, the amount of trash it accepts in the intervening year and a half could shoot up — way up. The town is talking to Rutland-based Casella Waste Systems about an agreement in which Casella would help Bristol cap and close its landfill in exchange for providing the private company a temporary place to haul municipal waste. Casella wants to bring in 23,000 tons of trash as part of the deal — roughly half of the dump's remaining capacity, and 23 times as much as the landfill is currently allowed to accept per year.

Depending who you ask in Bristol, the plan is either a financially responsible way to close a garbage pit or a recipe for disaster.

Town dumps used to be incredibly common in Vermont. But the state overhauled its waste-management rules in the 1980s and — with the help of state and federal funding — most towns decided to close their unlined landfills, which have no barrier between potential contaminants and the surrounding natural environment. Modern landfills, in contrast, have plastic liners.

Bristol bucked the trend; residents were attached to the community gathering spot, and, at one point, profits were strong. So the town took advantage of a 1987 legislative exemption that allows municipal, unlined landfills to stay open as long as they receive no more than 1,000 tons of trash a year. Its dump is one of just two unlined municipal landfills still in operation in Vermont; the other is in nearby Salisbury.

"It's an institution," said Fred Baser, a Republican legislator who sat on the Bristol selectboard at the time of the vote. Back then, the landfill was making money. 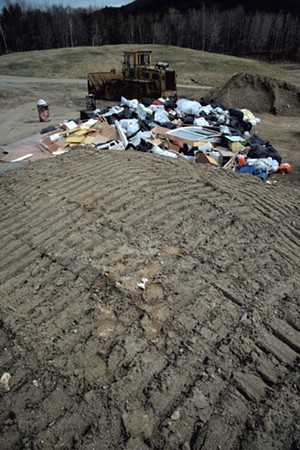 That's no longer the case, which is why the state got involved. ANR required that Bristol allocate an annual $61,000 to a fund to cover costs associated with its eventual closing, but it was barely breaking even — it had netted just $16,000 in the last fiscal year. So last fall the Bristol selectboard decided the landfill should close by the end of next year.

Once the date was set, the town had to figure out how to come up with the money. The 2013 estimate from Waterbury-based LE Environmental pegged landfill closure and capping costs at $1.4 million. With roughly $620,000 banked for the project, Bristol is well short of that. The selectboard is reluctant to ask taxpayers to make up the difference; after all, the town of 3,894 also needs a new firehouse, and the local union middle and high school are due for renovations.

So the town started talking to Casella. At a selectboard meeting on April 27, Casella Waste Systems engineer Joe Gay outlined the proposal: For six to eight months, Casella would take over the landfill, bringing in an estimated five to seven truckloads of municipal waste from Addison and Rutland counties each day. The company would pay Bristol a tipping fee of roughly $17 a ton for the trash — a fraction of the roughly $80 per ton cost to process waste at the Casella-owned landfill in Coventry.

Meanwhile, Casella Construction would sequentially close and cap the landfill over the course of those same months. The waste management and construction companies used a similar approach to help a town in New Hampshire almost 20 years ago.

"It was a win-win," Gay told the selectboard, emphasizing Casella's interest in helping the town. "I saw this as a similar opportunity for us."

Town administrator Therese Kirby said the town officials have turned over "every rock" looking for financial help to close the landfill, and "the last thing we want to do is bond," she said of the practice of securing long-term, low-interest loans for municipal projects. "There's no free money out there," said Kirby, after rattling off the long list of state and federal officials and organizations she had approached. "That's why a partnership with Casella really looks like the best hope for Bristol."

The Toxics Action Center, a national nonprofit concerned about pollution in communities, is sounding the alarm. The group has advocated for closing landfills since the 1980s.

Adding substantially more trash to the Bristol landfill for the next year and a half is "such a risk for the groundwater and the community," said Shaina Kasper, the Vermont and New Hampshire community organizer for the group. Bristol's landfill is perched over a sand and gravel aquifer, so if the landfill were to leak, Kasper said, pollution would spread "enormously fast."

It was Kasper who tipped off Bristol resident Sally Burrell, who is worried that if the town strikes a deal with Casella, truck traffic in her neighborhood would increase substantially. Town officials pointed out that Casella already trucks its waste through town en route to the Coventry landfill — but those trucks stick to main roads, not the residential streets surrounding the Bristol dump.

"I feel that putting all that weight on an unlined landfill is dangerous," said Burrell. "It's very risky to me. It's been going for 89 years, so there's a lot of really toxic stuff buried in there. I don't like it at all."

So far, groundwater test results have looked "surprisingly good," given that Bristol's landfill is "basically just a hole in the ground filled with trash," according to Barb Schwendtner, the section chief of the solid waste program at ANR. "In general, we're concerned anytime there's an unlined landfill."

Before Bristol can move ahead with the Casella plan, it must first overcome a political hurdle. The town wants to tweak the current legislation governing municipal landfills by temporarily increasing the current 1,000-ton annual cap on the amount of garbage allowed into the landfill each year. Right now, Bristol isn't coming anywhere close to that amount; Kirby estimated that the town is dumping somewhere in the neighborhood of 330 tons every year.

Representatives Baser and Dave Sharpe (D-Bristol) sponsored H.198, legislation that would temporarily lift the current 1,000-ton cap. The House Committee on Natural Resources and Energy took another round of testimony on H.198 last week, but because it missed the crossover deadline, lawmakers would have to attach the statutory change to another piece of legislation to make anything happen this year. Sharpe and Baser said their fellow lawmakers seem receptive to the idea.

"Our position on this is, that landfill has been operating since the 1920s," said Kirby. "People were throwing everything away back then." Today, Kirby said, municipal waste specialists are far more careful about what goes into landfills, so even if the quantity of trash increased significantly, so too would the quality compared to decades past.

"This isn't, 'All bets are off, and we're going to dump anything,'" said Kirby.

As of last week, there's another option: LE Environmental came back with a new estimate of $700,000 — roughly half the original — to close the landfill. That's just $100,000 more than the town has saved for the project. The reduced cost is based largely on using alternative materials to cap the landfill.

Casella's proposal is slightly more competitive: For $804,000, the waste and construction companies would close and cap the landfill, as well as complete required slope stabilization work, estimated to cost around $150,000, that isn't included in the LE Environmental number.

The math works out so that the town would walk away without having to allocate any additional funding for the project. Moving forward, Bristol would only be on the hook for the annual cost of monitoring the landfill, estimated to be $11,500 a year.

Cathy Jamieson, who oversees the solid waste program at ANR, said her department would require more testing, financial guarantees and a new certification if Bristol were to move ahead with a plan to bring in more garbage.

Either way, the dump's days are numbered; regardless of how much it costs, it'll close on December 31, 2016.

"It's just unfortunate that we're in the financial state of affairs we're in," said Merle Knight, with resignation in his voice, as he manned the landfill last weekend. In a maroon hoodie and "Duck Dynasty" ball cap, the landfill manager collected coupons and checks from residents dropping off bags of trash. One 30-gallon bag of waste cost $3.50.

In a small shed, George Smith, 88, manned the digital scale, weighing trucks and cars with larger loads of trash. He's worked at the dump for 20 years. During lulls, he chatted with a steady stream of visitors. "That's why I like this job," Smith said. "Everyone comes and visits with me. Oh, I have a lot of fun."