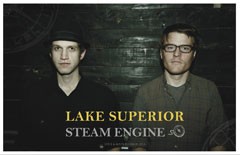 Say you’re a record reviewer and you’ve just been handed an album by a bluesy guitar-and-drums rock duo. Right off the bat you’re conscious of the two obvious, go-to comparisons readily available to you. But wait. You stop and tell yourself that you’re a better and more creative critic than that. You’re already writing a review and haven’t even listened to the damn thing yet! So you take it out for a spin and … soon find yourself right back where you started. Maybe it’s the easy way out, but you’re probably just right. Or right-ish.

Steam Engine’s opener, “The River,” begins with a lonely slide-guitar riff, breezy and flowing. The sound is clean in a way that seems both appropriate and kinda deceiving, considering what’s to come. Peter Rahn enters, singing, “I spend my time…” It’s an ascending line and sounds something like a young, less pissed-off Frank Black. And then the drums. The Robert Johnson a-tappin’ his foot blues mentality is there, but drummer Jeff Thomson offers more. Here, and throughout the record, the guitar work brings you down into the blues and the drum work puts you up on the rock, while the vocals go in whichever direction is most appropriate for the given track.

Midway through the album, cozy in slot number seven, “The River #2” starts with another slide-guitar riff, but less lonesome and way dirtier. And then the drums. The song is littered with ups and downs, loud and quiet. When, after two minutes, vocals have still not entered, it starts to become clear that they aren’t going to. The track doesn’t lose steam because of this but instead underscores the sole thematic sound around which Lake Superior operate: two-piece blues-rock. And that’s about all.

“Alone,” the album’s final and finest track, offers more variety and experimentation than the majority of other songs on Steam Engine combined. The key blues aesthetic is still present (“Oh Mama, don’t you treat me mean”), but it’s loose and it moves. The changes are fun, the solos are cool and the lyrics fit comfortably within their surroundings. “Alone” is the White Stripes meet the Black Keys plus a little something extra. Finally.

Steam Engine by Lake Superior is available at lakesuperiorband.bandcamp.com. Lake Superior play a record-release show at Positive Pie 2 in Montpelier this Saturday, June 22.