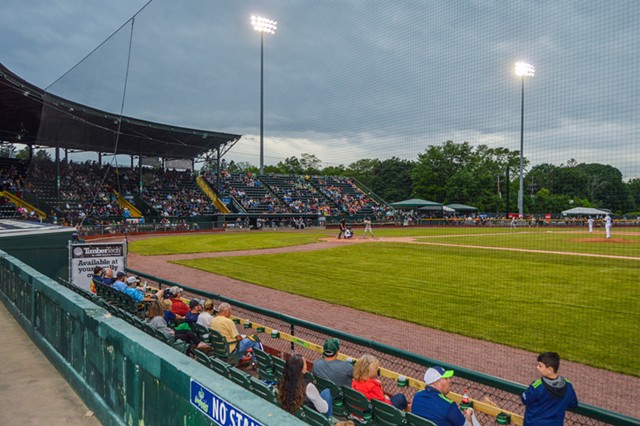 Foul balls at Centennial Field could land in some expensive territory this summer. The Vermont Lake Monsters will soon debut four new “box suites” along the first-base line of their Burlington home field.

The suites are designed for large groups and businesses looking to “entertain clients,” “reward employees,” and “thank customers,” the team’s website says. A 16-seat box costs $1,600, or $100 a person — 10 times the price of a single adult ticket.

Viewed another way, that same money on 25-cent hot dog night would get you 6,400 frankfurters.

Lake Monsters senior vice president C.J. Knudsen said Monday that businesses and sponsors had been asking for “something new and unique.” The suites, along with other changes to add more premium seating to the park, will “bring the fan experience to the next level," Knudsen said.

But the corporate-tinged nature of the upgrade has struck a nerve with some longtime Lake Monsters fans who treasure the quirky, affordable charm of watching America’s pastime at one of its oldest ballparks. And while the team notes that picnic tables behind the boxes will still be open to the public, fans say the ambience won’t be the same with luxury boxes blocking the view of the field.

The new owners seem to be chasing deep-pocketed organizations at the expense of the average fan, said Dan Barnes, a 42-year-old Winooski resident who attended about 15 games last season.

“I just think it’s really tone deaf,” Barnes said. “Down the right field line, that’s like ground zero for kids running around catching balls, meeting players, which is kind of what the whole thing is supposed to be about.”

After a slow start, the Lake Monsters achieved a 30-6 record and went on to win last summer’s league title, besting seven teams from Massachusetts, Maine and New Hampshire. The team will begin its title defense in late May and is scheduled to play nine of its first 13 games in Burlington.

The new suites should be ready in time for the team’s May 27 home opener, Knudsen said. To justify their high price tag, rentals include a “starter food package” of pizza, burgers and hot dogs. They also come with access to a dessert bar and fridge stocked with soft drinks and table service. As an added perk, one person from each suite will be allowed to throw out a ceremonial first pitch.

Everything You Need to Know About the New Vermont Lake Monsters
By Dan Bolles
Outdoors & Recreation
The suites are part of a broader renovation at Centennial Field that includes new bullpens, a larger right-field pavilion and a pizza oven. The team has also added outfield seating, including “sunset seats” that cost $100 for a pack of four and come with hot dog and soft drink vouchers.

Regular tickets go on sale later this month, Knudsen said. Prices across the stadium are going up $1 per seat.