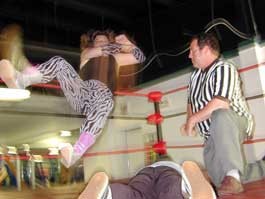 In this corner, shouts Roy Haynes, from a land unknown, comes Lisa The Adjuster!

The Adjuster raises her fists triumphantly and stomps the mat, gearing up for the match. This afternoon, she will have blood.

And in that corner, from Hollywood, California, Michael Monroe, The Movie Star!

The tiny Justin Lussier  The Movie Stars real name  grins slyly at The Adjuster. Usually he wears pink tights and a boa, but today its just a simple T-shirt and exercise shorts. The two combatants approach each other, venom in their eyes; they circle like predators, throwing out their arms, each one waiting for the other to slip up.

This is routine practice for Lisa The Adjuster Haynes, 38, who takes her hits every Monday and Wednesday at Bodyworks Fitness Center in Williston. Shes one of seven pro wrestlers  the other six are men  who comprise the local branch of Rampage Pro-Wrestling, New Englands loosely defined independent circuit. World Wrestling Entertainment, Inc.  known as WWF until this spring  body slams into Burlington only once every few years. The last visit was in 1996. Vermonts homegrown tanglers perform an average of once a month and, within this tight clutch, The Adjuster holds her own.

On a national level, professional wrestling is a lucrative business and a major American obsession. The sport has been performed and televised for decades. It battled its way to the forefront of pop culture after Vincent and Linda McMahon established the WWF more than 20 years ago. Since then, Hulk Hogans face has appeared on countless T-shirts and cartoon shows, and The Rock now stars in Hollywood action flicks. Last year, total revenues from tickets and merchandise amounted to $111.2 million, netting WWE a $9.4 million profit. Its permanent ring in New York City, called The World, can entertain 1200 fans per night, six times the number of people who show up at Rampages biggest event.

Rampage unites the small wrestling communities of Vermont and Maine  New Hampshire doesnt participate  and the athletes put fun before funding. Where the late Andre the Giant once raked in $15,000 a fight, local wrestlers work for peanuts, says Lisas husband, Roy. One gig in Boston paid $100 for a 15-minute bout, but this is considered top dollar.

Rampage puts together three weekend matches a month; each includes a full roster of 20 to 25 ready-to-rumble wrestlers. These are intimate affairs. For Lisa Haynes, a match at Bodyworks usually brings in an audience of 50 or fewer, though she has played houses of over 200 at Highgate Arena and several National Guard armories.

Seen together, Lisa and Roy Haynes seem to be the happiest couple in Vermont: They laugh constantly together, Roy in a jovial baritone, Lisa like a shrill bird. Roy is a heavyweight with glasses and a thick Brooklyn accent; Lisa is a small but muscle-packed 160 pounds.

Lisa and Roy met 11 years ago at Pier 66, a Fort Lauderdale resort, where Lisa was serving cocktails and Roy worked as a security guard. He was a wrestling fan, and she caught the bug from him. She used to hate wrestling with a passion, Roy confides. But then we saw a show in West Palm Beach and security had to restrain her.

Roy started an intensive search for a trainer. Within a few months hed found Rusty Brooks, an old-school pro who had wrestled for more than a decade and kept a ring in the yard of his Fort Lauderdale home. He taught Lisa the tricks of the trade  dropkicks, punches, hurling and other varieties of violence. For six months she practiced three or four times a week, even while working full-time as an accountant  a gig that inspired her moniker, The Adjuster.

Decked out in her new leotard and high-rimmed boots, Lisa fought her first match in Pampano Beach, Florida. While she did her skull-crushing, Roy cheered for her  or against her, as long as the crowd got riled up with him.

In the lingo of pro wrestling, Lisa is a cruise away  meaning she weighs under 175 pounds  and lately she tends to play the baby face, or good guy. After 11 years of combat, the Adjuster has battled hundreds of foes, from West Palm Beach to Maine. Having vacationed several times in Vermont, she and Roy moved to Hunting-ton in 1994, where wrestling quietly vanished from her life. She had never aspired to join the WWE and, if it hadnt been for coach Chad Merchant and his new crew of wrestlers, she might have hung up her sequined robe for good.

Merchant is the builder and owner of the ring in Bodyworks. He began pro wrestling three years ago under the name Shane Williams and started training students in St. Albans a year later. Because he only has seven students  who pay just $200 to $300 for six months of lessons he also keeps his day job at Rosies Beef Jerky in Swanton.

Merchant used to hold classes in the St. Albans Armory, but after it was temporarily closed to the public following September 11, he moved his ring to Willi-ston, bringing his students with him. Merchant takes his teaching to heart: Watching my kids grow up and watching these guys, he says. Its the same frickin thing.

Though there is no womens division in the independent circuit, Lisa Haynes remains the clubs most experienced member. She pumps up each day with 500 rounds of jump rope, 85 suspended sit-ups and a half hour of stair climbing.

Most of the other wrestlers in her league supplement their wrestling wages with outside sources of income. But when Haynes says pro she means career; aside from Lisas paltry income from scattered gigs, she and Roy rely on their savings. If you ask them what they do, they say wrestling.

SMACK! Back in the ring at Bodyworks, The Adjuster kicks the 170-pound Movie Star in the stomach. No sooner does the Hollywood hunk crumple than The Adjuster is kicking him in the ribs, rolling him over, beating him some more. Suddenly he springs to his feet, and the ensuing brawl is fast and furious legs pseudo-breaking and ribs faux-cracking. The Movie Star flings The Adjuster onto the ropes, but she bounces back, using her arms to clothesline The Movie Stars head. The Movie Star recovers, aims for her eyes and they abruptly stop.

Wait a minute, he says.

Try the eye jab, she advises.

The violence is masterfully improvised, and outcomes are truly decided on the mat  the wrestlers wordlessly determine who will win each match by gauging their opponents movements and body signals.

Not one iota is choreographed, Roy insists. Its both athleticism and a show. Entertainment. To a certain extent, theres cooperation involved. He pauses, and both he and his wife laugh conspiratorially. Well, Roy adds, I dont think Im exposing any big secret.