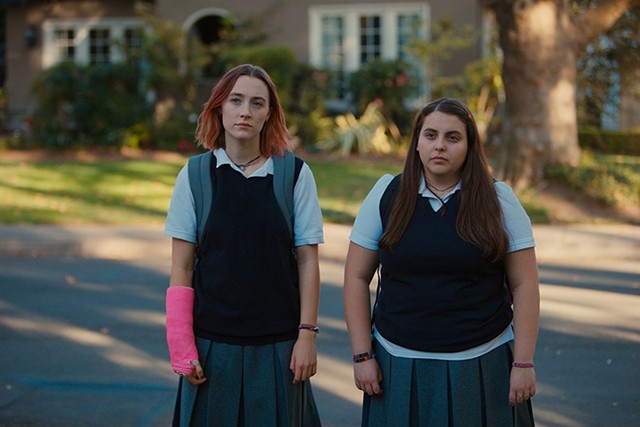 Behind every real-life "manic pixie dream girl," there's a world of doubts. Critic Nathan Rabin coined that phrase to refer to film characters such as Natalie Portman's in Garden State, who use their magical quirkiness to convince a depressed male protagonist that life is worth living.

Rabin has since disowned the MPDG concept, citing its rampant, often sexist, overuse. He has a point, yet the effervescent free spirit is a powerful persona; for some young women, adopting it is a declaration of independence. The thing is, a persona is never the whole truth, as Greta Gerwig — who, in her acting career, has embodied pieces of the archetype — demonstrates in Lady Bird, her solo debut as a writer-director.

Set in Sacramento — the "Midwest of California" — in 2002, this is the coming-of-age story of a teen (Saoirse Ronan) who personifies self-aware quirk. She's renamed herself Lady Bird, finding her birth name — Christine — a bit pedestrian. Running for office at her Catholic school, Lady Bird posters the halls with collages of her head on an avian body, boldly (and unwittingly) anticipating the "put a bird on it" meme. When a nun objects, the young woman suggests breezily that the crafty campaign is performance art.

If Gerwig hadn't made the film with a healthy self-awareness of her own, her heroine might have been insufferable. But, like Wes Anderson's Rushmore, Lady Bird juxtaposes its young protagonist's precious posturing with the rough-edged truths behind the curtain.

For instance: Even for free spirits, class is a thing. Lady Bird's family still lives in their "starter home." Her dad (Tracy Letts) has been fired from his white-collar job. Her mom, Marion (Laurie Metcalf), wants Lady Bird to "be the best version of herself," which means going to a state school. There's fierce love in Marion's efforts to rein in her daughter's dreams of a fancy East Coast college, and we can't help seeing both sides of their running debate.

Not much happens in the movie. A rambling chronicle of Lady Bird's senior year, it's still consistently entertaining, sometimes laugh-out-loud funny. While the film pivots around Lady Bird's dynamism, Gerwig gives the supporting characters their own lives; no one is on-screen just to be the butt of a cheap joke.

Like many attention seekers, Lady Bird has a quieter best friend and foil, Julie (Beanie Feldstein), whose silent reactions are often the best parts of their scenes. The nun referenced earlier (Lois Smith) isn't a gorgon-ish authority figure but a person of good sense and humor. The cool guy in a band on whom Lady Bird sets her romantic sights (Timothée Chalamet) is a lot less cool when we get to know him. Like Lady Bird herself, he's a confused kid trying to construct an identity from a collection of poses.

We already know Lady Bird well: She's Holly Golightly; she's Gerwig's character in Frances Ha; she's every small-town girl who ever dreamed of remaking herself into a glittering creature of the metropolis. Taking things lightly is part of her shtick, the part that makes MPDGs so attractive to people who feel bogged down in the muck of reality.

But all that birdlike flitting and soaring takes energy, and sacrifice. By extending the story beyond the seeming resolution of its conflict, beyond the point where Boyhood (which covered similar territory) ended, Gerwig reminds us that "coming of age" is a convenient conceit like the MPDG. Just as carefreeness requires effort, so "growing up" never ends.

The original print version of this article was headlined "Lady Bird"