Labor Pains: The VSEA's New Boss Is Shaking Things Up 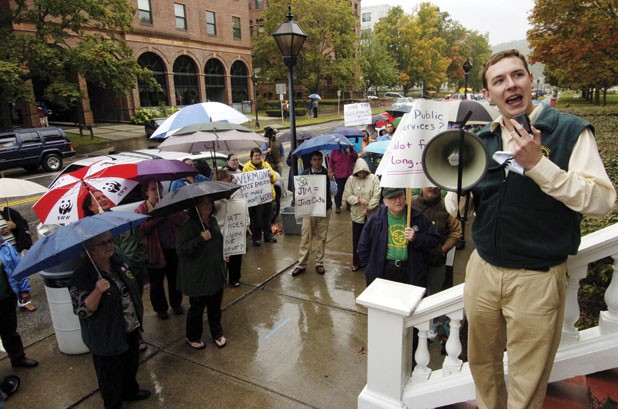 The Vermont State Employees Association was seeking a transformational leader who could take the 5200-member union in a new direction when it hired Mark Mitchell last December.

In the last five weeks, six of the union’s 19 staff members have departed — four of whom told Seven Days they feared the new executive director was causing irreparable damage to the organization.

“All of us have left because of our lack of confidence in the abilities of the Director, not just to lead and administrate the Organization, but our sincere belief that he is doing much harm and if allowed to stay, the state of the VSEA will continue to deteriorate,” one departing employee, Lucinda Kirk, wrote in a letter to the union’s board of trustees. (Click here to read the letter on Off Message.)

A 14-year veteran of the union, Kirk served as its senior field representative until she left for a job in the state’s Department of Human Resources late last month.

In her letter, Kirk criticized Mitchell for antagonizing legislators and administration officials with whom the union must negotiate to preserve the jobs and increase the wages of its members. As the sole union representing state employees, the 68-year-old organization’s membership includes two-thirds of the state’s 7800-person workforce.

Kirk’s letter also blamed Mitchell for failing to learn about the union’s day-to-day operations and its collective bargaining agreements. It claimed he’s failed to earn the trust and confidence of his employees.

“Staff have been afraid to speak up because what they have witnessed first-hand [sic] the untrustworthy and reckless manner in which Mr. Mitchell seems to regard staff and members alike,” Kirk wrote. “They are afraid for their livelihoods and their families.”

No current or former VSEA staff members contacted for this story were willing to speak on the record, but four discussed the situation on the condition of anonymity.

Though the letter was signed solely by Kirk, several of them have since read it — and all agree with its basic thrust. “Everything she outlines, I’m completely in agreement with,” said one former employee, adding that, by leaving, “There’s a message we were trying to send.”

“She’s pretty justified in saying most of what she’s saying,” said another ex-employee.

Calling it a personnel matter, the VSEA declined to make Mitchell available for an interview, but the president of its board of trustees, John Reese, spoke extensively in defense of his executive director.

“The reality is Mark’s been doing a really good job for the organization,” Reese said. “He’s new to the organization and is bringing a fresh approach to things. There’s always going to be some bumps in the road.”

Reese characterized the recent turnover as an expected outcome of Mitchell’s work to implement long-sought changes to the union’s mission. At the direction of the board, the VSEA is attempting to move from a “service model,” which relies upon central staff to file all grievances and negotiate contracts, to an “organizing model,” which seeks to empower rank-and-file members to help conduct union business.

To support the shift, the VSEA plans to create five new positions, three of which would be on-the-ground organizers. At its annual meeting last month, Reese said, its membership voted 2-1 to raise dues by $94.38 a year — to an annual $441.48 — to pay for the new positions.

“We brought Mark on board to help turn this ship around because we kind of stagnated. We want to revitalize and get our membership more involved and more enthusiastic,” Reese said. “In the next two years, you’re going to see a very different VSEA.”

Reese attributed early tensions between Mitchell and state officials to his previous work in regions where labor tactics tend to be more rough and tumble than in Vermont. In the 20 years since he earned a law degree from the University of Southern California, Mitchell held eight labor jobs in California, Florida and South America. He’s represented nurses, teachers, engineers, opera singers, TV writers and garment workers.

“It’s a different environment and I think that Mark’s approach to dealing with folks — especially early on — was surprising to them because they hadn’t seen a real labor guy come in from the outside who’s had to have knock-down, drag-out fights with administrations and politicians,” Reese said.

Vermont AFL-CIO president Ben Johnson sees that new approach as a positive — both for the VSEA and Vermont’s labor movement generally.

“When you are working hard to give people their voice, you’re not going to be universally popular,” he said. “That’s what you’re seeing right now.”

As for the critics, Johnson said, “To me, it looks like some combination of a disgruntled staff person and some element of just not sharing the vision of the VSEA as a strong organization that builds the type of membership that fights for itself.”

State officials have been less charmed by Mitchell, noting his approach is an unwelcome departure from that of former executive directors Jes Kraus, who now directs UVM’s office of affirmative action and equal opportunity, and Annie Noonan, now Vermont’s Commissioner of Labor.

“I have worked with several of the previous directors of the VSEA and I’ve always had good communication and a trusting relationship with them,” said Secretary of Administration Jeb Spaulding. “Speaking just for myself, I do not currently have that relationship with [Mitchell]. Whether that can change, I hope so, because state employees deserve to have effective representation. And there’s certainly room for improvement.”

Senate President Pro Tempore John Campbell’s take? Mitchell has an “in-your-face style” that is “not the Vermont way.”

“It seems as though he’s more of a D.C.-style person, rather than someone who comes into a state and meets the folks, meets the people, sits down and talks with them,” Campbell said. “I think what he did was come in with guns blazing.”

Exacerbating the VSEA’s political problem is the departure of the union’s two-member lobbying team, which includes widely respected former legislative coordinator Conor Casey. He left the organization Friday to take a new job with the National Education Association in Connecticut.

Mitchell’s aggressive approach was on display last month, state officials said, when the Vermont Veterans’ Home in Bennington faced scrutiny from federal regulators. The state-run, 140-resident facility nearly lost federal certification — and the $10 million of funding that comes with it — following allegations of abuse and neglect.

While federal regulators ultimately spared the facility, state officials were peeved that Mitchell blamed the home’s problems on understaffing. Much to their dismay, Mitchell took to the airwaves of WCAX-TV to continue castigating the administration on the very day Gov. Peter Shumlin announced that the facility had been spared decertification.

In her letter, Kirk argued, “Mr. Mitchell has initiated a culture of conflict there and asked the community to draw attention to deficient patient care, which has now undeniably caused the State and Federal authorities to find multiple VVH deficiencies,” she wrote.

Reese had a different view. “For the allegation to be that we drew attention to problems at the hospital, that’s a really surprising and difficult claim to accept,” he said. “We’re trying to work together with the administration to square this away, but it took a while to get through to them about the seriousness of the problem.”

Reese said that in the wake of the Vermont Veterans’ Home controversy, he received 50-60 emails from members who work at the facility praising the union’s actions and just two or three emails complaining about it.

Ultimately, whether Mitchell stays on at the VSEA will be the decision of its board of trustees, who have not met since they received Kirk’s letter. Several trustees declined to comment on the record, but their perspectives on the matter ranged from full-fledged support for Mitchell to confusion about the staff departures and concern about whether the board has sufficient information.

“The board has received the letter and we’ve been in touch about the situation,” Reese acknowledged.

Asked whether the subject would come up at the next trustees meeting, Reese said, “Absolutely.”