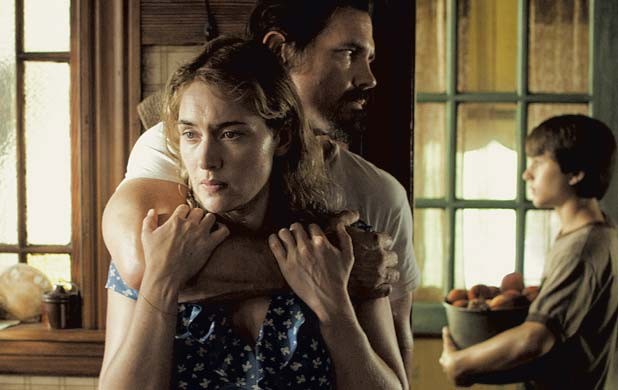 The latest from mega-successful writer-director Jason Reitman had all kinds of buzz back in October and was slated for release in the prestigious Christmas Day slot. Given Reitman’s track record — including Thank You for Smoking, Juno and Up in the Air — there was an assumption that big things, perhaps even Oscar things, were in the offing for the young filmmaker’s fifth feature. Then somebody at Paramount watched it.

Now here we are in the Hollywood landfill that is midwinter, finally getting a look at Labor Day and understanding all too well how that release date changed and why there hasn’t been a peep about the movie in the protracted awards-season conversation. It’s just a really awful film. And I don’t mean awful by Jason Reitman standards. I mean four-in-the-morning Lifetime-movie awful. So awful you wonder if an artistic screw has come loose.

How else to explain Reitman’s four-year obsession with adapting Joyce Maynard’s novel about an escaped killer who holes up with a New Hampshire divorcée and her 13-year-old son over a holiday weekend in 1987 and (spoiler alert!) changes their lives forever? I couldn’t believe my eyes as this Harlequin romance played out without a single tongue anywhere near a cheek.

Josh Brolin is hunky convicted murderer Frank Chambers. Kate Winslet plays depressed, tremor-afflicted and evidently shampoo-phobic Adele Wheeler. Newcomer Gattlin Griffith costars as her son, Henry, who’s so traumatized by the whole experience that he narrates the movie in Tobey Maguire’s voice. “I don’t think losing my father broke my mother’s heart,” he muses, “but rather losing love itself.” Can you imagine the fun Juno MacGuff would’ve had with goop like that?

Fun, however, is in short supply here, despite the movie’s snort-worthy premise that the three immediately hit it off and commence fulfilling one another’s yearnings. This involves, among other things, Frank making home repairs, doing the ironing, waxing the floors, whipping up his special chili (more on his culinary skills in a minute) and teaching Henry to play baseball — in addition to rebooting Adele’s libido. Adele teaches her homicidal houseguest how to rumba, the type of thing that can only happen in a really awful chick flick. Eat, Pray, Dance.

There aren’t enough pages in this issue to list all the bone-headed plot holes in this film. The entire town is in manhunt mode (police even pay a visit to Adele), and Frank’s face is on TV every five minutes. Yet that doesn’t stop him from spending quality time in the front yard teaching the boy how to replace the oil and change a tire on the family car. Oh, and I guess it would be expecting too much for anybody to lock a door. You wouldn’t believe how often the Wheelers’ neighbors keep popping in. But the movie’s low point, its loudest unintended laugh, has to be the pie.

“What I want to talk about is crust,” Frank announces after a neighbor stops by with a bucket of peaches. Not since the days of Jason Biggs has pastry played as sexually charged a part in an American film, though the result here is a thousand times funnier.

The director devotes an unbelievable amount of screen time to the straight-faced preparation of this baked good, cutting to close-ups of Frank’s and Adele’s intertwined fingers squeezing glistening slices of fruit and lovingly molding and massaging dough.

By the time Frank helps Adele close up the pie — which he calls “putting a roof on the house” — you’re certain to wonder when the manhunt for the wunderkind auteur is going to begin. Because, in Labor Day’s nearly two hours, the Jason Reitman fans have come to know is nowhere to be found.