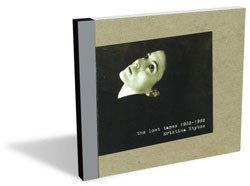 It’s an old cliché that sometimes you need to lose something before you really appreciate what you’ve got. In considering Kristina Stykos’ The Lost Tapes 1982-1992, that sentiment proves doubly true. First, as the Vermont songwriter writes in the album’s liner notes, discovering the collection of discarded demos and unreleased tracks that had sat gathering dust in various closets over the past 30 years was like being reintroduced to old friends, and it brought back a well of emotions she had thought long-buried. And second, I, um, lost her album, which was actually released in late 2011. It recently resurfaced from behind a pile of previously reviewed albums on my desk. My suspect filing habits notwithstanding, I’m delighted the album found its way back to me and imagine it’s a feeling similar to what Stykos experienced when she began exploring her forgotten catalog.

Listening to these lost recordings is like sifting through a time capsule. While local audiences may be most familiar with the songwriter via her folk-centric solo work or her collaboration with Americana stalwart Bow Thayer, the record reveals a wealth of varying styles and influences. Some, like the electric-piano-driven tracks “Looking for an Angel” and “Married to Hope” sound charmingly dated — and understandably so. But regardless of their sonic clothing, these songs chart a course that helps explain how Stykos evolved into one of the state’s dynamic and fearless songwriters.

For example, “Settle for Paradise” is a daring selection whose shifting, ethereal harmonies would seem to presage Raven, her 2011 collaboration with Windham Hill Records’ synth auteur Philip Aaberg. Ditto the fascinating “I Will Fly Home One Day,” which could be an ancestral precursor to much of the experimental pop making waves in the local scene right now.

Even the more conventionally straightforward tracks, such as “It’s Hard to Believe” and “Island in the Sunrise,” while decidedly folk oriented, hint at a deeper musical curiosity that manifested later in her career.

Viewed simply as a retrospective, Stykos’ Lost Tapes is a fascinating listen. But it’s more than an academic curiosity. The album is a genuinely gripping work. I can think of dozens of songwriters who would be thrilled to have written tracks as good as many of Stykos’ lost songs. Like Stykos, I’m just glad I found them again.

The Lost Tapes 1982-1992 by Kristina Stykos is available at kristinastykos.com.