It's Oscar season, and everyone has an opinion about Kristen Stewart's turn as Diana, Princess of Wales, in Spencer. Director Pablo Larraín, who brought us Natalie Portman as Jackie Kennedy in Jackie, gives us another take on a 20th-century female icon with this psychodrama, currently playing at Merrill's Roxy Cinemas in Burlington and the Savoy Theater in Montpelier.

The British royal family arrives at Sandringham House for Christmas. Princess Diana is late, having driven herself solo from London in defiance of protocol.

The year is 1991, and Diana is estranged from her husband, Prince Charles (Jack Farthing), being well aware of his affair with Camilla Parker-Bowles (Emma Darwall-Smith). Over three days, Diana moons around her suite, tries on the elaborate outfits planned for her, obsesses over the fate of her ancestor, Anne Boleyn, and attempts to visit her boarded-up childhood home.

Meanwhile, stiff-upper-lipped Major Alistair Gregory (Timothy Spall) strives in vain to make Diana more decorous. By the end of the holidays, the royal separation will be all but official. 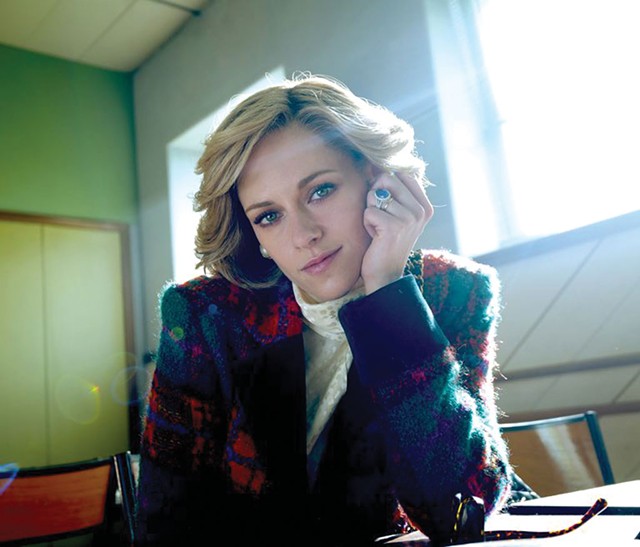 Larraín's biopics aren't really biopics. They're mood pieces, taking place over brief, emotionally intense periods in the subjects' lives and purporting to bring us deep into their psyches. Visually impressionistic and dominated by striking musical scores (this one is by Jonny Greenwood), these films aren't for everyone. If you liked Jackie, there's a good chance you'll like Spencer, and if you hated Jackie ... you get the picture.

I liked Jackie, but there's no denying that Spencer is, in some ways, a harder sell. While Portman's Jackie is a study in grace under pressure, grappling with a horde of logistical problems in the wake of her husband's untimely death, Stewart's Diana embodies depression and aimlessness.

The role isn't actually much of a stretch for Stewart, who's most famous for playing a mopey adolescent in the Twilight franchise. She may not physically resemble Diana, but she broods soulfully, showing depth and some flashes of tart humor.

Don't come expecting juicy royal intrigue: The film features just one conversation between Charles and Diana, and one brief interaction between Diana and the Queen (Stella Gonet). Most scenes find Diana alone, and when she does interact with her in-laws, there's a palpable sense that everything has already been said. These are the withered husks of relationships; at this point, active hostility takes more effort than Diana or anyone else can spare.

But Diana comes alive when she plays silly games with her sons (Jack Nielen and Freddie Spry) or chats with her dresser, Maggie (Sally Hawkins), the only person who successfully persuades her to follow royal protocol. Her funk is so convincing that these moments of liveliness feel like states of grace.

The screenplay by Steven Knight (Eastern Promises) hits some hokey beats as it tries to dig under the surface of Diana. Her spectral visions of Boleyn (Amy Manson) are fun, but her fear of sharing the beheaded queen's fate feels like a literary device. So does her fixation on Sandringham's pheasants — pretty showpieces bred to be hunted. There's even some talk of modern monarchs being mere "currency" that sounds like Marxist literary theory. But it's all basically window dressing.

Perhaps that's fitting, since the film suggests that the monarchy itself is just window dressing — or another empty husk with the juice sucked out of it. But how beautiful Larraín makes all that window dressing! From the very first shot — morning sunlight slanting over a frosted field — he bathes the film in a glow of peach and salmon pinks.

As exquisite as it is mournful, that winter light also evokes the nostalgic haze that descends whenever we think about Diana and the lost possibilities her short life represents. Spencer may not have anything new or revelatory to say about Diana herself, but its visual language says a lot about how she's become part of our modern myths.

In this sense, Spencer might actually be a movie less about the royals than about us. Knowing that her whole world is a trap, Diana despises the frilly frocks she's made to wear; she can't keep down the pastel pastries with which the estate's chef (Sean Harris) plies her. But Larraín's camera eats up all these gorgeous concoctions — as do our mesmerized eyes.

Is our fascination with this woman's pain voyeuristic? More than a little. But the mixed feelings evoked in us by this "Fable From a True Tragedy" (as Larraín calls it) are all too true to life.

The original print version of this article was headlined "Spencer"