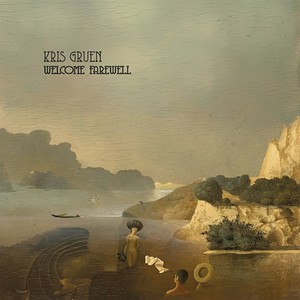 As a listener with distinctly seasonal musical tastes, I find that September represents a bit of a sticking point for me. I'm shaking off the pop-rock indulgences of summer and prepping to slide into a moody, indie autumn. Winter will bring on a lot of cozy instrumentals and singer-songwriters. And then, around April, things will start to get weird.

September, though, is an in-between month, requiring fun and nostalgia in equal measures. It was fitting, then, that I got to dip back into a genre that reminds me of the mid-2010s with Kris Gruen's new album, Welcome Farewell. Even that title just exudes September's contradictions.

What Seven Days staff writer Jordan Adams termed "oh-core" in his review of Gruen's 2018 album, Coast & Refuge — the tendency of "ohs" and "yeahs" to take center stage — I've always referred to as "stadium folk." Gruen's marching tunes on Welcome Farewell, clever without being pretentious, are designed to draw in as wide a crowd as possible and get them singing along.

On this, his fifth studio album, Gruen branches out from his acoustic singer-songwriter roots with the increased presence of a band and creative instrumentals. Some songs, particularly "When She Says," feature a twang-ified Jack Johnson-style cadence. On others, Gruen sounds quite a bit like Jay Farrar of Son Volt. The third track, "Nothing in the World," grabbed me with a plunky, thumping bass line, great baritone harmonies and wry lyrics.

While that driving rhythm made "Nothing in the World" one of my favorites, I was also drawn to two songs at the end of the album that showcase Gruen's lyricism. "Apple Tree" honors Gruen's late grandmother with lyrics such as "I find her now in tiny practicalities, / the box of nails she gave to me, the way you fold your laundry." It's a lovely portrait of the intricacies of loss and the surprising ways in which long-gone loved ones linger.

In "The Painter," Gruen describes an artist trying to capture the colors of the desert with a paintbrush. A line as simple as "He feels the rivers turning in his hand" covers ample ground in conveying an artistic flow state and a conversation between artist and nature.

Welcome Farewell's biggest flaw is that the track list is varied to the point of disorientation. In fact, when I first listened to the album prerelease on SoundCloud, I wondered whether the songs had been jumbled in the uploading. There's no discernible arc to the album.

Still, certain songs beg to be plucked out for an early autumn playlist. If you catch me in headphones on a midmorning walk through my neighborhood with pep in my step and a faraway look on my face, just leave me be.

Welcome Farewell is available on all major streaming services.