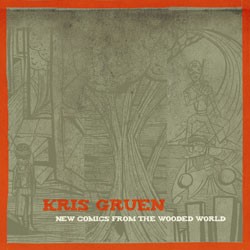 With few exceptions, the worst thing that can happen to a gifted songwriter is to grow up — or to get sober, but that’s a (mostly) separate issue for another day. While there is truth in the age-old axiom to “write what you know,” the minute rockers start penning songs about adult growing pains is often the minute longtime fans begin to tune out. Which is why making that kind of prosaic subject matter of interest to anyone besides the writer presents such difficulty. And it’s one reason New Comics From the Wooded World, the new record by Vermont’s Kris Gruen, is so impressive.

Gruen’s latest is an artful treatise on being a well-adjusted grown-up. But he approaches this treacherous terrain with wide-eyed, youthful soul. And so he manages a rare feat: making songs about, for example, whose turn it is to get up with the newborn (“Whose Gonna Watch the Baby”), day jobs (“Company Man”) and getting older (“Little Again”) universally relatable and compelling. (Hey, even time-tested topics like heartbreak and longing can be stale in the wrong hands.)

Gruen is a tremendously gifted lyricist who weaves narratives and metaphors with ease. There’s a calm, purposeful reserve in his writing, but never at the expense of emotional impact. Rather, his even-keeled approach is an uncommonly fine asset, and one that succeeds with feather-light nuance and grace.

Similarly, Gruen is a sophisticated composer. Throughout the record, shades of his formative influences dovetail. You’ll hear gossamer strands of Nick Drake and Iron & Wine. There are moments of sublime orchestral release not unlike that of Sufjan Stevens or Andrew Bird. And there are visceral turns that mirror the early roots of Whiskeytown-era Ryan Adams. But Gruen never lingers long on any of those inspirations. Instead, he offers a sly wink before delving into some new, lofty space of his own divination. And he often meets up and harmonizes with friends such as Anaïs Mitchell and Sean Hayes, among other notable guests.

Writing honestly about being an adult presents unique challenges, not the least of which is potentially boring your audience to tears — or, worse, reminding them that they aren’t getting any younger either. But on New Comics From the Wooded World, Kris Gruen proves that just because you’ve grown-up, it doesn’t mean you have to get old. And in the end, achieving some maturity is preferable to being an aging rocker with a Peter Pan complex.

New Comics From the Wooded World by Kris Gruen is available at motherwest.com. He plays at an album-release party at Positive Pie 2 in Montpelier this Saturday, June 29.