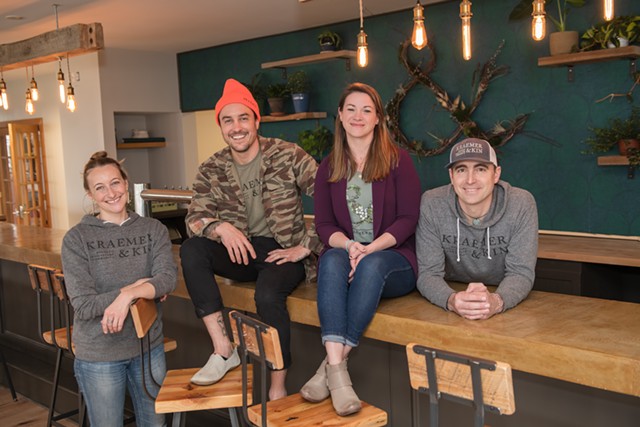 Christie, Heather and Levi Kraemer started their Grand Isle County-based microbrewery in a garage in February 2020. That summer, the trio opened a tasting room at GreenTARA Space art gallery and community center in North Hero.

Kraemer & Kin's tasting room remains open, but it has moved brewing operations to the previously unfinished space under the Alburg Golf Link's restaurant and bar, which it is running in collaboration with chef Travis Limoge.

The space will allow Kraemer & Kin to increase capacity, "which is good, because we're running out of beer," Levi Kraemer said with a laugh. He planned to brew the first batch in the new brewery on April 18.

The co-owners had been looking "indiscriminately" at potential homes for Kraemer & Kin when they learned that Alburg Golf Links was on the market. They met the owners and "realized the marriage of the golf course and a brewery could be a really cool thing," Levi said. They hashed out the details of a lease-to-buy arrangement in January and were in the space by February 1. 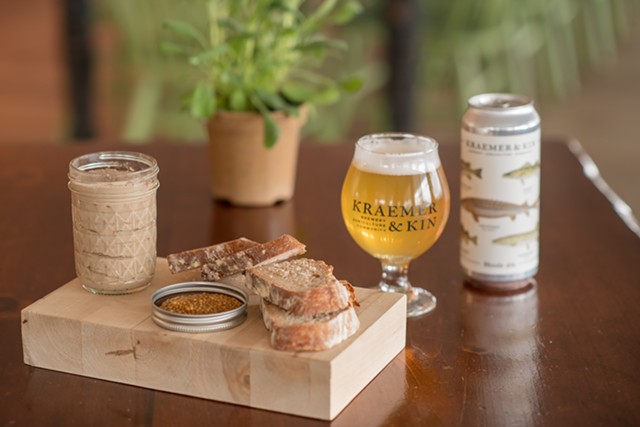 The opening menu features dishes made with Kraemer & Kin's beer — and elements of the beer — such as popcorn with brewer's yeast; pub cheese with cheddar, Red Ale and mustard seed; Black IPA pâté; and a brewer's pie with beef, liver, bacon, root vegetables, potato, cheddar and stout.

Kraemer & Kin has also taken over the clubhouse taps and will offer a rotating selection of its hyper-local beers, with ingredients sourced from its own North Hero hop farm and throughout the Champlain Islands.

"We try to bring our love of naturalism and fascination with the forest and flora to our brewing," co-owner Heather Kraemer told Seven Days last spring. "We use flowers, stuff from our gardens and things that we're purchasing from local farmers."

That local focus is central to Limoge's food menu, too. Limoge, 37, grew up in Essex Junction and spent time at his grandfather's restaurants in the Northeast Kingdom. He got his first restaurant job washing dishes and prepping salads at 12 and, when he turned 14, "begged a job" at Leunig's Bistro & Café.

"It was never about being a chef," Limoge said. "Cooking food is just incredible to me, and I liked the action."

At 18, Limoge moved out West to snowboard but kept working in restaurants. He landed his first executive chef job in Los Angeles 10 years ago. On a sabbatical in Oaxaca, he fell in love with Mexican food and culture and eventually moved to Puerto Escondido, where he opened Pirata, a 10-course tasting-menu restaurant sourced entirely from one organic farm and low-impact species from area fishermen.

"I've always had a problem with the industrial food complex," Limoge said. "A lot of people say they're working locally, but what they're really doing is buying a few ingredients that are local and not doing anything to help fortify the local food shed."

Limoge first met the Kraemer & Kin team while cooking a pop-up dinner at Ellison Estate Vineyard in September 2021. "We just see eye to eye about how things are supposed to work in the world," he said. "I think this combination is going to be pretty explosive."

He plans to source everything on the menu from Grand Isle County other than flour, which comes from Nitty Gritty Grain of Vermont in Charlotte. The majority of the restaurant's produce will come from Sandy Bottom Farm in Isle La Motte, and meat will come from Pigasus Meats in South Hero.

"This is a cool opportunity for me to have some nostalgia in my cooking again, to go back to the things I ate when I was a kid," Limoge said. "I'm not cooking Mexican food. I'd love to define what this place means in food, its flavors and products."

The new restaurant and bar is open Thursday through Sunday, 11 a.m. to 7 p.m.