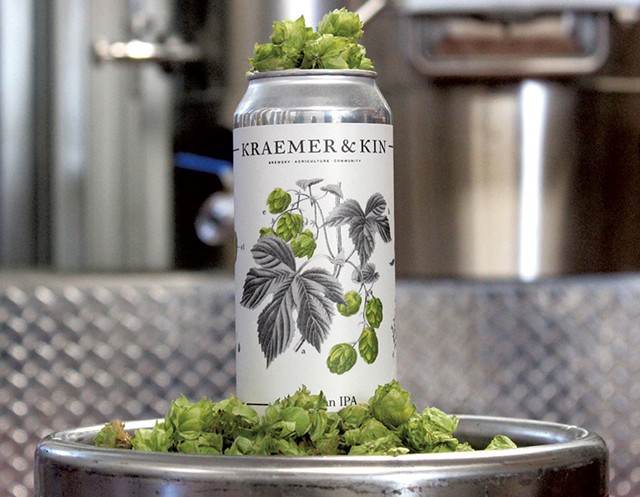 The Champlain Islands were one of the last regions of Vermont without a brewery to call their own, but the new Kraemer & Kin Brewery in Grand Isle is putting them on the state's beer map.

When the family-owned business — operated by Heather, Levi and Christie Kraemer — makes its debut at the Great Ice! event in North Hero on Friday, February 14, the product will reflect years of preparation and experience in the beer industry.

"We really weren't sure how to do it, but my family has deep roots in North Hero, and we knew we wanted to stay in the islands," Christie told Seven Days.

The trio's nontraditional progress toward opening a brewery began six years ago, when they established a hop yard on Christie's family property in North Hero. "That let us create relationships with local brewers through the hops, and we learned the industry from that perspective," she said.

During that time, both Christie's husband, Levi, and his sister, Heather, dove into the beer world, learning the skills of their future business. Most recently, Levi worked as the head brewer at St. Albans' 14th Star Brewing.

It took three years for the family to find a home for the brewery, owing to strict wastewater limitations and lack of commercial space in the islands. The solution ended up being right at their doorstep: A three-barrel system in their garage will allow them to keep overhead down while they build their brand. They hope to open a taproom within the next year.

"We see the brewery as a way to build community and agricultural connection here in the islands," Christie said. "Our beer is very island-based. It's hyperlocal, which lets us express the taste of Vermont as well as reduce our carbon footprint."

Sustainability is an important part of the brewery's mission. Cans are packaged in compostable E6PR four-pack rings, liquid waste from the brewing process is captured and used as fertilizer by a local farmer, and spent grain is fed to animals on Christie's family farm. "It's even more important to take these big, bold steps in the islands because of the lack of space and the water system infrastructure," she said.

Kraemer & Kin doesn't focus on any one style of beer. Its inaugural releases, which will be distributed to local restaurants and retail shops starting this month, include a black IPA, an American IPA, a cream ale and a pale ale. Future brews will use ingredients from neighboring farms to put twists on classic styles, such as a lemon balm IPA.

The aim is to "build and celebrate local agriculture," Christie said. "The overall philosophy is to brew clean, delicious beer with fresh ingredients."