Konflik, 'Back to Basics' 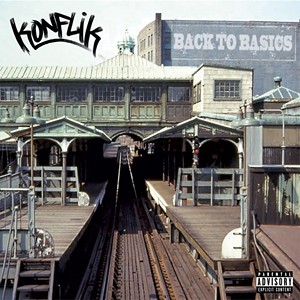 Konflik can rightly be called one of the godfathers of Vermont hip-hop. He has been involved with the scene here for almost as long as it has existed. A native of Roxbury, Mass., he's known throughout the Northeast as an "MC's MC," a gifted purist respected by his peers.

Since the mid-'90s, Konflik has been bouncing between Brooklyn, Boston and Burlington, an orbit that connected him with 802 legends such as Fattie B and DJ A_Dog. Together, they formed Eye Oh You, a trio that held down a Red Square residency for years and inspired an entire generation of Vermont MCs and DJs.

It's amazing, then, that Back to Basics marks Konflik's debut album. Fittingly, he has teamed up again with his brother and longtime collaborator Nastee, a cofounder of the Vermont hip-hop crew VT Union who has since found broader success as a producer and engineer. Nastee's New York City studio features a wall full of plaques he's received for his work with iconic artists such as Mobb Deep and Big Pun. This is a family project with a world-class pedigree.

The album is a short set, just over 20 minutes. But, between the brilliant pacing and the dense lyricism, it's a real journey. The back cover shows the songs laid out like a subway map, and Back to Basics is a brisk tour of Konflik's influences and legacy.

After a suitably '90s spoken-word introduction, things kick off with "Project Building," a dynamite concept track that shows off the rapper's endlessly creative flow. His rhymes are a collage of styles and eras, as much Raekwon as Rakim, always rooted in his love of hip-hop culture.

In fact, this project is something of a rap curriculum. Old heads will appreciate every reference, and new artists could unpack a rich education in New York City beats and rhymes. Yet none of that is necessary to enjoy the album, which is funky and fun. The track list flips a lot of classic beats, but Nastee's expert touch makes them all sound brand new.

The songs are full of urgency, too. Beneath the intricate wordplay, tracks such as "The Foulness of Being Young, Gifted & Black" and "Float" are sharply observed meditations on street life. On "Can I?" — which features the album's only guest appearance, from Harlem MC Brando Forbes — Konflik digs deep for a raw autobiography of a verse.

Back to Basics showcases Konflik as an artist with huge range at the top of his game. Best of all, it's just an appetizer course. "Damn, I can't wait to make these next LPs," Konflik raps on "Dat's Dat Sh*t," and you can hear the relish in his delivery. Sure enough, Nastee says they're already finishing up new projects.

This is the beginning of a long run, then, and a perfect reintroduction to one of Vermont's very best. Back to Basics is a joyful blast of boom bap that blends old-school sensibility with cutting-edge production. Every single track is full of rewindable bars, and Konflik has more energy and hunger than ever.

Back to Basics drops on all digital platforms on Friday, October 1. Konflik headlines an album release party on Saturday, October 2, at the Cellar in Burlington.

Speaking of Konflik, Back To Basics