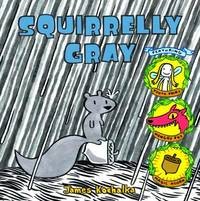 These days, it’s not enough to promote new books the traditional way — in print — or even to put up an author website. You’ve gotta have a “trailer.” Few of these online mini-movies are as droll as Burlington cartoonist James Kochalka’s promo for his new picture book Squirrelly Gray, published by Random House on August 28. Aimed at the 2-to-7 set, it tells the story of the eponymous rodent, who “lives in a world without color,” according the website copy. “His TV is the only fun he has. (And it’s really not much fun.)”

The trailer features animated images from the book, drawn in the “American Elf” cartoonist’s trademark naïf style, while Kochalka’s voice intones couplets reminiscent of Dr. Seuss: “Once upon a time, for Squirrelly Gray who’d lost his teeth, / The world was dull and bland, / Until the Tooth Fairy got stuck, / And Squirrelly lent a hand.” In the background, a piano plays a march-like piece that Kochalka says is from Carrot Boy the Beautiful, a rock-opera album he released with his band James Kochalka Superstar. Besides narrating the trailer, Kochalka plays the parts of Squirrelly, the Tooth Fairy who gifts him with a “magic acorn,” and the wily fox who offers to help him crack it, crooning, “my succulent young fellow.”

The multiple-Ignatz-Award-winning cartoonist has written “a couple graphic novels for kids,” he says, in a phone interview punctuated by background chatter from his 4-year-old son, Eli. Squirrelly Gray is different, “sort of a hybrid between verse and comics,” he explains. It’s also his first book from a big publisher. At ComicCon, the mammoth cartoonists’ convention held in San Diego, a Random House editor came up to Kochalka and told him he liked his comics, he says. Soon they were discussing his plans for a picture book.

Kochalka uses Eli as a “test audience” for his comics, he reveals: “I’ll write a chapter and then read it to him as a bedtime story.” But he hopes older readers will like Squirrelly, whether they’re parents, fans of his other work, or both. “If your children’s book doesn’t appeal to adults, then you’ve really failed,” he says.

Kochalka is busy writing a Squirrelly Gray song for his appearance at the Burlington Book Fest next week. Meanwhile, his Random House bio suggests that, despite being a dad, he’s not ready to give up his rebel rocker status just yet. Its last line: “His music drives parents crazy!”