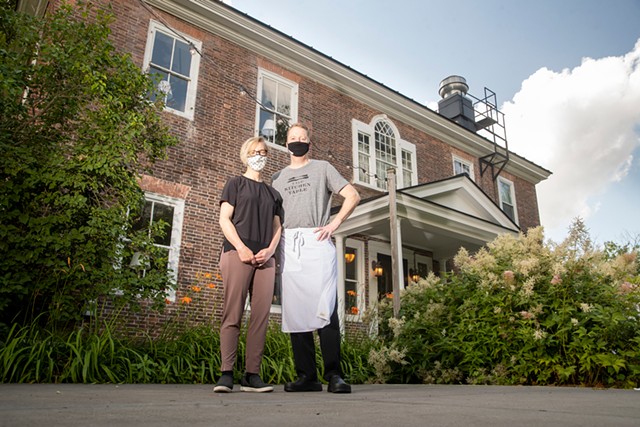 Lara and Steve Atkins, chef-owners of the Kitchen Table Bistro in Richmond, announced on November 4 that they have "decided to close the restaurant and put it on the market."

The Atkinses have operated the farm-to-table destination for 19 years. Now 50, the pair met 25 years ago as students at the now-defunct New England Culinary Institute, Steve said in a phone interview. Both of the chefs and their restaurant have been repeat semifinalists in the James Beard Foundation awards.

In late September, the restaurant was temporarily closed while Steve recovered from a severe back injury. He’d tried at first to work through it. “That’s what you do in the restaurant business,” Steve said.

The issue persisted and was finally diagnosed as a herniated disc. “As I lay on the living room floor,” Steve said dryly, “we were afforded the opportunity to have many conversations to assess where we are professionally and personally.”

Steve and Lara are known for their hands-on approach as chef and pastry chef, respectively. "Since we have built the business as an all-in proposition for ourselves, this means that we really have to be either All In, or we’re out,” said their announcement, which appeared in their email newsletter and on the restaurant’s website and social media. “Health and circumstances have indicated that All In is not really an option for us anymore."

The announcement explained that recent challenges — including Steve's injury and the pandemic — prompted the pair to think through their priorities, including their desire to spend time with family. They concluded that they should sell the business.

“My back forced the issue for us,” Steve said.

This is not the first time the Atkinses have put the Kitchen Table Bistro on the market. In late 2014, they opened Parkside Kitchen, a casual eatery in Richmond, where Lara took charge while Steve continued to lead the bistro. In September 2015, they listed the Kitchen Table for sale, citing as a reason the realization that they worked best together. After several months, the couple decided instead to close Parkside Kitchen and refocus together on Kitchen Table.

The restaurateurs said they are not sure what the future holds, but they do not anticipate it will involve professional cooking. “It has been our life,” Steve conceded, “but we’re pretty excited to have the opportunity to consider other things.”

The Kitchen Table Bistro — including the stately brick building visible from Interstate 89 — has been listed for sale with Pomerleau Real Estate. That includes the restaurant’s name, if a buyer is interested.

“Kitchen Table is us,” Steve said, “but it can be somebody else if they want to continue with the name.”