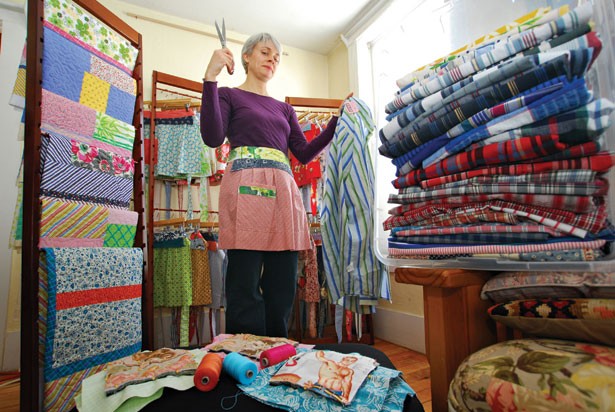 You're at a craft fair, poking through sundry handmade goods, when Sarah Green's vibrantly colored textiles grab your attention - aprons, potholders, pillows, bags, coasters. But wait, back up. Those are no ordinary potholders. They're works of art: three layers of sweatshirt material sandwiched between new and vintage fabrics at front and back. And, yes, they're "eco-friendly," made mostly from recycled cloth. But it's the images on the fabric that catch your eye. These are definitely not your grandmother's potholders. Or even your mother's.

Meet "HotHolders," each of which features one of five different shirtless, hunky handymen. HotHolders are the creations of the 40-year-old Vermont artisan. Her business slogan: "Because you're not the only thing in the kitchen that's hot."

The sexy potholders, and the motto, were inspired by a few yards of fabric Green bought the year before she started her now 2-year-old company, Mountain Ash Design. That particular length of cotton depicted 1950s beefcake types with surfboards, ukuleles and giant lobsters, and the HotHolders she made from it sold out quickly. Green couldn't find any more of the pattern (at least not until recently, when she scored some on a trip). So when she came across the current handyman-beefcake print, she purchased a full bolt.

It was a wise investment. Though Green also makes HotHolders adorned with Mexican folk-art scenes, animals, firemen and cowgirls, the Handymen are her biggest sellers. Only the top half of each gent fits on a 6-inch Hot Holder, by the way, so Green has a growing pile of discarded bottoms. "If anybody wants the legs, I'll cut them a deal," she offers.

Green does use a full-length handyman on another product - the inside pocket of her shoulder tote featuring a "secret helper." "He's ready to hold your knitting needles, boarding pass, whatever you need," she explains. Despite the innuendo, the images are not overtly sexual. Green refers to them as being "caught in fun moments of suspended sensuality."

Whatever. Bottom line is, Hot-Holders are hot items among customers of various sexual orientations. "There's a straight woman/gay man market that overlaps," Green says. "Straight women who like them for themselves and get a kick out of them, and women who also recognize that these guys are so gay. Ladies buying them for their gay male friends."

As far as she's concerned, the broad appeal is "great," and that's not a surprising response from a former sex educator with a degree - from Wellesley College - in art. Green surmises she's on a "mission" to present non-stereotypical, positive expressions of sexuality to the world in an accessible form.

"What could be homier and more accessible than a potholder?" she asks rhetorically. "Everybody needs potholders, even if they only cook out of their toaster oven."

The HotHolder is but one of the recycled items Green creates in the West Topsham home she shares with her husband, papermaker Richard Langdell, and their two children. Her studio/workshop, which doubles as a guest room, is filled with stacks of fabric, heaps of scraps and plenty of clutter. It's also home to her beloved Bernina 1031 sewing machine.

During the design stage, Green says, she lays out her work on a plain white bedspread. Most of the fabrics she uses in her domestic products have enjoyed previous lives; she picks them up at rummage sales, thrift shops and clothing swaps. Her description of cutting up a man's dress shirt sounds like a post-mortem. And, in a sense, it is.

"I very carefully cut off the collar and the cuffs, because I use those as decorative trim in my aprons," Green says, noting the procedure is done with her treasured Gingher scissors. "I cut off the sleeves. I cut up the side seams and the yoke. And then I have some lengths of fabric to work from. Pieces, I should say, not lengths. The shirt back is a fat rectangle."

The former button-down shirt, now reduced to pieces of cloth (the buttons join her son's burgeoning collection), will get a second life in the form of a HotHolder, a belt, a billfold, an apron or a tote bag.

When she was growing up in Duluth, Minnesota, Green says, frugality was a tradition and core family value. She recalls her grandmother making quilts and other items almost always with used fabric. "That's a tradition I really love, and it appeals to me - the reusing of available resources," Green says. "Visually, I find older fabrics more interesting than what you can see in all the fabric stores. They're more unique, and the objects are imbued with greater meaning." Old textiles, she suggests, "deserve another chance." Mountain Ash Design provides plenty of them.

The same impulse drives the red-hot trend toward "reconstructed clothing," which hipsters can buy at local stores such as Winooski's Green Closet. For her part, though, Green has chosen to focus on domestic goods rather than apparel. "I wanted to make items that are practical and are going to be a part of people's everyday lives," she says. "It's not just something to look at."

Still, she concedes that her aprons double as a fashion accessory. Their hip, retro look appeals mainly to young women of urban backgrounds or sensibilities. Young Vermonters, Green speculates, may be a little shy about wearing them to prance around the kitchen. "If you're living in Vermont and you want to be sophisticated, that sort of country-retro look isn't what you're after," Green says. "But in some circles, that's very trendy right now."

Green herself is an apron enthusiast from way back - she's been collecting them for more than 20 years. But some of her customers are just discovering their allure. "I have had gay men who received my HotHolders come to me exclaiming, 'I want a matching apron,'" Green says. She plans to oblige with some reversible, man-style aprons featuring handymen on one side. "I'll probably only make a few and just offer them on my Etsy shop," she says, referring to Etsy.com, an online marketplace for buying and selling all things handmade.

Green is pleased with her company's growth and direction, she says: Last year she made more than $6000 in sales, which she reinvested in the fledgling venture. This year she's expanded her line of products to include shopping totes and baby quilts, made from recycled fabrics and new, 100-percent- organic batting. Her products can be found at local craft fairs, select shops and galleries around the state, as well as online. And that's pretty hot.