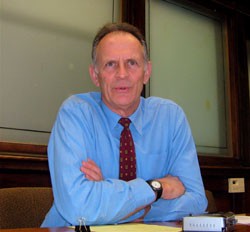 His name may not be a household word despite what he does for work, but the rookie mayor of the largest city in Vermont told “Inside Track” this week he likes his job so much, you can put him down as a candidate for reelection in March 2009!

Bob Kiss, 60, was a Progressive Party state representative from Burlington’s Old North End when he won the vacant three-year term following Progressive Mayor Peter Clavelle in March 2006. The former social worker is a tall, quiet, unassuming guy who surprised a few people when he decisively won the Queen City’s first instant-run-off mayoral race. Under the new election rules, a candidate needed to break the 50-percent threshold to claim victory.

(Incidentally, had such requirements been the law back in March 1981, that Independent challenger by the name of Bernie Sanders, who won with 40.1 percent of the popular vote, might be in a different line of work today.)

As for Bob Kiss, the Quiet Man was top dog with 39 percent of the votes as voters’ first choice. Democratic State Sen. Hinda Miller, who had a well-funded campaign with well-known supporters, was second with 31 percent. And Republican Kevin Curley, a former city councilor, finished third with 26 percent.

Then the brand new instant run-off system kicked in under the guidance of Director of Elections Jo LaMarche. She and her crew quickly totaled the second-choice votes and announced the Quiet Man had won a decisive victory over Hinda, the not-so-quiet Democrat. Kiss beat Miller 4761-3986.

And Monday night’s unanimous passage by the Burlington City Council of the controversial, contentious zoning rewrite indicates Mayor Kiss is able to get the job done despite critics who describe him as a “one-term wonder.”

Monday afternoon, yours truly dropped by for a chat.

The Quiet Man was in good spirits, having just gotten word from Burlington’s Chief Administrative Officer Jonathan Leopold that Moody’s had maintained the Queen City’s Aa3 bond rating. Like his

Progressive forerunners in the mayor’s office, Kiss is very conscious of the bottom line.

Asked to name his proudest achievement to date, Mayor Kiss answered, “Putting two budgets together that met the city’s needs with very little acrimony.” Kiss said his mission “to pay attention to the financial details of running a city while paying attention to social-justice needs” is what it’s all about.

Asked if he could do one thing as mayor for the City of Burlington, Kiss surprised us with his answer. “I would end the war in Iraq,” he said.

“Because by 2017 we will have spent $2 trillion on it,” he lamented. There used to be funds for Urban Development Action Grants and Community Development Block Grants. Now those taxpayer dollars fuel the endless Bush-Cheney war.

As for his own political future, Kiss made it clear to “Inside Track” he will be running for reelection in 2009. “Quite a few things,” he explained, “just can’t be resolved within three years.” It takes longer.

He mentioned two things: constructing the Champlain Parkway to get truck traffic off Pine Street, and outdoor lighting. “Sky glow,” he told us, has become an issue for him.

“A long time ago,” noted Mayor Kiss, “New Mexico declared the night sky a state treasure and began to formulate outdoor lighting policies around that commitment.”

As for political ambitions beyond mayor, Kiss said that, unlike his progressive predecessors in the corner office — Bernie Sanders and Peter Clavelle — he has no ambition for statewide office. He’s perfectly content where he is. But he would like to see fellow Progressive Anthony Pollina step up and take on incumbent Republican Gov. Jim Douglas in ’08.

“I’d support Anthony,” said the Quiet Man. Tony the Prog’s candidacy, he said, “is really a conversation right now, not a done deal.”

Can Gov. Douglas be beat?

“Jim has been at this for a lifetime,” replied da Mayor. “He’s very good person-to-person. He’s at all the events and has had the opportunity to build a team that delivers at the state government level. But I really do think that there’s a different vision that could be even more successful,” said Kiss.

We shall see, eh?

Moving On — As 2007 wraps up, the Kiss administration is losing two veteran top department heads.

Community and Economic Development Director Michael Monte is moving on after a very long run with the Sanderista/Progressive political regime, which moved into city hall in the early 1980s and revitalized a crumbing old town that had seen better days. Yours truly can still picture Ol’ Mike among the handful of Sanders supporters in the city clerk’s office on that March Election Night in 1981. The night the miracle happened.

“Well, that was the idea,” said Monte. “To foment a small revolution that had some long-lasting value.”

Michael started Monday as the chief operating officer at the Champlain Housing Trust.

Monte, incidentally, had publicly endorsed Democrat Hinda Miller in the 2006 mayoral race, yet Bob the Prog kept him on as CEDO boss.

Kiss was late to jump into the mayor’s race, and he noted “quite a few people, at least at the beginning, had endorsed Hinda.” Mayor Kiss said he didn’t emphasize “looking for endorsements.” Rather, he said, “I needed people’s votes on Election Day. I think that’s how it turned out.”

Another longtime Burlington regular departing is Police Chief Tom Tremblay. Tommy Terrific first put on the Burlington blues way back in 1983 — around the time Monte signed on. He worked his way up through the ranks from beat cop to detective to administrator.

Now Republican Gov. Jim Douglas has tapped Tommy Terrific to replace Commissioner of Public Safety Kerry Sleeper. That’s right, our Republican Guv is snatching up the top cop in the People’s Republic of Burlington and making him his top cop.

Was Bob the Prog surprised GOP Jim picked Tremblay to be Vermont’s next top law-enforcement official?

“If I were the governor and looking at candidates,” said Kiss, “I would choose Tom. He’s done a really good job as police chief.”

Tremblay, he said, is a “community-based-policing guy. He pays attention to victims’ interests. People,” said da Mayor of Burlington, “don’t run in fear from the Burlington Police Department.”

Bob the Prog called it “a loss for the city.”

He’s got that right, too.

Kiss said he will be putting out an employment ad and hopes to fill the spot by February. Early buzz reflects the hope that a selection will be made from within the current BPD ranks. Kiss makes the call, with city-council approval.

House Secrets? — Yours truly takes one weekend off, and what does the distinguished Republican caucus of the Vermont House do?

They hold their pre-session caucus in secret, barring attendance by members of the Fourth Estate.

And it looks like the only reporter they had to lock out was a distinguished old-timer of the Vermont airwaves: Andy Potter from WGOP, er, sorry, WCAX-TV.

Potter told Ch. 3 viewers Saturday evening that the House Republicans justified holding their caucus behind closed doors by “calling it a planning session rather than an official party caucus.”

A week earlier, House Democrats held their pre-session caucus with the doors open.

As one scribe noted over in the “Freyne Land” blogosphere:

What the hell is this tiny minority worried about? That somebody will actually press them to come up with an idea on their own? Or that someone will be there to witness their complete inability to do so?

In the Trenches — That how Sen. Patrick J. Leahy sounded Tuesday during a break in the negotiations on Capitol Hill. The Vermonter had spent all morning in “line-by-line” negotiations on the Foreign Intelligence Security Act (FISA). The former Chittenden County State’s Attorney, like most Americans, has a problem with the warrantless wiretapping the Bush administration has made legal in recent years under the guise of fighting terrorism.

This shredding of the Constitution comes from the same team that lied to the American people about the late Saddam Hussein’s WMDs, his threat to our nation and much, much more.

Yet, despite those lies, the Bush White House rules on. Why?

Because we still have a Constitution and President George W. Bush still has veto power, explained St. Patrick. “It’s like turning a ship around,” he said with a sigh. “There’s been more than one filibuster a week,” he told us. “It’s unprecedented. There’s never been an experience like this in the history of the country.”

As long as the GOP holds tight and prevents the Democrats and GOP defectors from getting the 60 votes required to halt debate, the Senate stalemates will continue. If you feel depressed, you are not alone.

But let’s not forget the Vietnam War of the 1960s and ’70s, the senator reminded us, a war likewise based on lies and propaganda.

“All but one member of the U.S. Senate voted for the Tonkin Gulf Resolution,” noted St. Patrick. “Everybody was in favor of the war in Vietnam.”

But then “the new group of senators” elected in November 1974 came in, Leahy among them, “and within six months you couldn’t find anybody who supported the Vietnam War.”

That’s because Prosecutor Sand had decided on court diversion for a 61-year-old first-time offender, a lawyer who was growing her own grass.

Sand has previously called for the state to reexamine its drug laws. He’s raised the question of whether our resources could be better spent policing and prosecuting crimes that inflict serious harm to our citizens, such as drunk driving and burglary.

By Tuesday afternoon, our governor appeared to have seen the light. The Fifth Floor issued a statement saying Gov. Douglas was “heartened to hear on the news last night” that Sand will not have a “one-size-fits-all” practice or policy for Windsor County. That and his dialogue with Windsor County law-enforcement officials represent “a meaningful effort to restore balance in the criminal justice system in that county.”

Of course, Sand the Prosecutor never said he would have a one-size-fits-all policy, but Gov. Douglas was not going to let that get in his way. Our governor appears to have realized overnight that his recent “Reefer Madness” outburst simply wasn’t flying. There is, after all, an election next November.

Therefore, our guv, who as a legislator in the 1970s once voted to decriminalize marijuana possession of less than 1 ounce, announced he had “decided to lift my order requiring state law-enforcement officers to send first-time marijuana possession cases involving significant quantities to the Attorney General or U.S. Attorney for an initial prosecutorial review.”

Whew! Surely the attorney general’s office has better things to do, eh?

One veteran Vermont attorney, a former prosecutor now at the defense bar, told us he’d bet that “75 percent of the people who work in a Vermont courthouse, including lawyers and judges, smoke a little pot.”