When it comes to a musician's career, sometimes the stars align in unpredictable ways, revealing unforeseen collaborations, musical directions and even geographic relocations. Richmond, Vt., singer Tiffany Pfeiffer, who at one point in her career wrote horoscopes for a San Francisco arts mag, is a fantastic example of how serendipity can change an artist's direction. And she's got a gorgeous new jazz EP, the self-produced Stampede of Love, to prove it.

Pfeiffer grew up in Omaha, Neb. Music played a role in her life from early on; she took piano lessons from her mother at age 4 and gigged with her family's gospel singing group. As an adolescent, she toured nationally and internationally with the Nebraska Children's Chorus.

After high school, Pfeiffer headed to Drake University, where she double-majored in music and journalism — the latter at the suggestion of her mother, who wanted to expand her daughter's career options. After graduating, Pfeiffer moved to San Francisco and took a job as editorial director of Free, a Bay Area arts magazine funded by dotcom-boom investors. Her responsibilities included composing and editing features, writing horoscopes, and handling calendar listings — which meant lots of chances to hear great live music. Ironically, she didn't get to play much music of her own.

When the magazine folded, Pfeiffer had one thought: "I need to make music again." She envisioned a warehouse space in which to do that, and knew she could never afford one in the Bay Area. So in 2002, "with three suitcases," she hightailed it to Brooklyn, N.Y., where rents were lower and an indie scene was in full swing. She waited tables, worked for a music service that would later become Rhapsody, and made new connections.

Pfeiffer got her first break with a chance audition. "A friend who worked at BB King's Blues Club told me I should audition for a show called "Soulfully Sinatra," she recalls. Pfeiffer took the advice, landed the job — and soon was singing in front of a capacity crowd of 800. "That was one of my first real gigs," she says, "and I really loved the live energy." 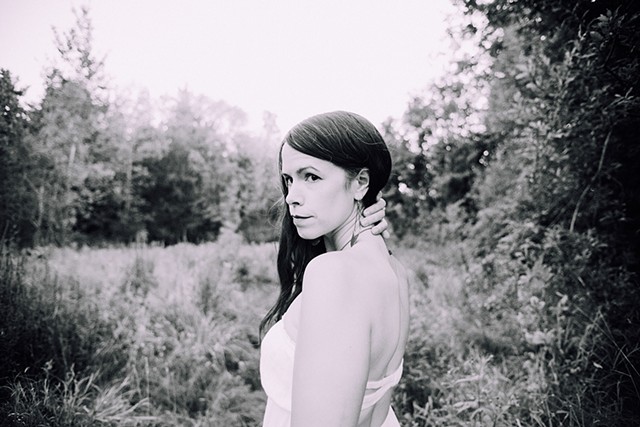 Carleton Smith, who produced the show, loved Pfeiffer's energy, too. He booked her for other projects, and she stepped out on her own backed by the Discarnate Band. They attracted the attention of another producer, who put up $10,000 for a record. That disc, an EP called Amor Frio, brought together Pfeiffer's varied musical interests, from jazz to reggae, indie rock to rap.

By the end of 2007, Pfeiffer had grown tired of city life and longed to escape. It was then the stars aligned once more. At a wedding in New Mexico, she met a young farmer from East Danville, Vt. They began a relationship, which led to Pfeiffer visiting the Green Mountain State. "I thought Vermont was where wealthy people went skiing," Pfeiffer admits. "I just had no clue."

It didn't take her long to fall for the real Vermont. She moved here for good in the summer of 2008, even though her romantic relationship had ended. Pfeiffer rented a house in Westford just before the Great Recession hit. She scrambled for work, teaching voice, piano and yoga. The music lessons caught on, growing to 35 students a week, and Pfeiffer's economic situation stabilized. She also brought the Discarnate Band to Vermont for gigs.

A booking error at Tosca's at Trout River Traders in Montgomery gave Pfeiffer her next cosmic nudge toward the jazz world. The owner of the eatery had double-booked Pfeiffer and the Discarnate Band with PoJazz, a Vermont group that mixes jazz with spoken word. She sat in with the group, which led to an invitation to join the band.

Pfeiffer also began to step out on her own as a jazz singer, making regular appearances at Vermont clubs and the Burlington Discover Jazz Festival.

Which brings us to 2016 and Stampede of Love. The EP, Pfeiffer says, came out of "a desire to take the next step in expressing what my jazz identity is, [and] it's not necessarily what it was when I started singing with PoJazz."

To make the record, Pfeiffer mined the world of jazz standards. But, she says, "I wanted to give them a fresh feel, without going overboard stylistically."

She brought some heavy hitters on board: Gabe Jarrett on drums, Rob Morse on bass and Shane Hardiman on keys. Dave DeCristo at Signal Kitchen did the recording; he and Pfeiffer collaborated on production. The arrangements, she says, "were more spontaneous. They came out of discussions we had as a band rather than as notations I asked them to play."

The result is what Pfeiffer was hoping for: a group of tunes that are instrumentally inventive but not frivolous or flashy. They perfectly match Pfeiffer's melodically fluid, casually restrained vocal style.

Pfeiffer doesn't just possess a gorgeous voice; she knows how to sing — when to lay back, when to cut off a phrase and when to let the band speak for her. She cleverly toys with phrasing and melody, as on tunes such as Cole Porter's "I Am in Love" and "Night and Day." And while she does come close stylistically to previous iterations of these songs — notably in the Rickie Lee Jones-influenced reading of "Dat Dere" — Stampede of Love is clearly Pfeiffer's personal take.

A recent record-release show at Radio Bean with Morse, Hardiman, and Jarrett showed that their album doesn't lean heavily on studio magic. Pfeiffer and the band seemed completely at ease as they spun out cuts from the EP and numerous other jazz standards.

And this is part of Pfeiffer's new path, one she came to by happenstance, persistence and her own talent. "I think it's sort of a first step in the direction I am headed," she says. "Who knows where I will eventually end up?"

The original print version of this article was headlined "Love Notes"