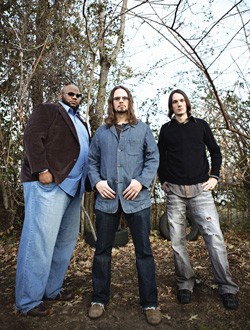 North Mississippi Allstars’ latest record, Keys to the Kingdom, is in essence a eulogy. Written in the months following the death of founding members Luther and Cody Dickinson’s father, Jim Dickinson — a noted Memphis musician and producer — the record is indeed a tender honorarium. At times, it is also a brutally honest examination of the tenuous line between life and death. But more than that, the album is a celebration of the circle of life. It is unquestionably the blues-informed rock band’s most personal work to date. And, as audiences around the globe are discovering, it may also be their finest.

SEVEN DAYS: Tell me a little bit about your dad. What kind of guy was he?

LUTHER DICKINSON: My father was a rock and roller in Memphis in the ’50s. I mean, he was basically a teenager in rock-and-roll heaven, you know? He lived through the whole thing: soul music in the ’60s, Stax, Atlantic Records. He was an amazing musician and producer. And he was a great friend. We made a lot of music together.

SD: When you were growing up, did you have a sense of who he was in the grander scheme of things?

LD: I just thought he was super cool. I knew he was different from all the other kids’ parents. But I was always aware of the music. I was enamored with it. I always knew that that’s what I wanted to do.

SD: Confronting mortality is a central theme on the record. Did you come to any new realizations about life and death?

LD: I found myself looking at the cycle of life from all different directions. In fact, our first daughter was born soon after my father’s death. My father used to always say, “Play every note like it is your last, because one of them will be.” And that pretty much sums it up. [Dealing with death] is an experience everyone goes through. And it hit me really strongly and these songs just sort of came out.

SD: A number of the songs are written from the perspective of your father as he is dying. How were you able to put yourself in that mind-set?

LD: Again, they just came out, so I didn’t try and do anything. Most of the songs change perspective from verse to verse. Songs are funny, man. They’re hard to control.

SD: Being able to record this with your brother [drummer Cody Dickinson] must have made the experience all the more profound.

LD: I love working with him anytime. He’s a joy to play music with and make records with. We were just glad to be playing together.

SD: There is something undeniably special about sibling bands. Do you have a sense of what makes them unique?

LD: There is a sort of telepathy and a common bond that just helps the music. I mean, all through different generations there have been so many family bands. It keeps you from having to overrehearse stuff. It becomes instinctual.

SD: Do you think that comes more from having grown up playing together, or is something more deeply ingrained, genetic? Nature versus nurture, I guess.

LD: It’s genetic. It’s experience. It’s all of those things. But in our case, it’s just that Cody is so good he can always tell where I’m going. [Laughs.]

SD: The hill-country-blues-style cover of Dylan’s “Stuck Inside of Mobile with the Memphis Blues Again” is remarkable. That was your dad’s idea, right?

LD: Yeah. It was his idea and I told him we’d do it. It turned out good.

SD: He had to write that idea, though, because he couldn’t speak at that point, correct?

LD: That’s true. We were hanging out and I was reading a great Bob Dylan interview to him. And he came up with that idea and wrote it down for me.

SD: The album has a very spontaneous, raw feel and was largely recorded live. Were these mostly first takes?

LD: First or second. Maybe third. We recorded it really fast. So some of the takes are probably the first time we made it all the way through a song. [Chuckles.] But none of it was belabored. It was produced very smooth. And you always shoot for that. At least I do. Working with the Black Crowes and with my father and different people, I learned that recording is performance. It’s not overproduced recordings all put together. If I had to do it again, I would make the record even more raw.

SD: Mavis Staples’ song was one take, though. What was it like to work with her?

LD: Aw, man. She’s just the queen. To me, she’s such a great example. She’s experienced everything. Her family represents the history of American music. Her dad was friends with Charley Patton. He was the original blues recording artist on 78s back in the ’20s. She was friends with Martin Luther King, Aretha Franklin, Howlin’ Wolf, and then Bob Dylan and Keith Richards. Everybody loves Mavis. But she’s so cool and laid back. And that was a first take. She just knocked it out.