In 2005, Martin Philip moved with his family from New York City to Vermont to work as an entry-level baker at King Arthur Flour in Norwich. Before that, he was a professional opera singer, studied drawing and worked in corporate finance. Notably, Philip had no professional baking experience, apart from a summer job during college at a wood-fired pizzeria in Cleveland.

To balance the stress and lack of creativity in his New York day job, Philip had become a serious home baker and had traveled to King Arthur to take a bread class. He was hooked instantly, he explains in his new book, Breaking Bread: A Baker's Journey Home in 75 Recipes. "I saw the mastery," Philip writes. "I saw passion, work, experience and craft." 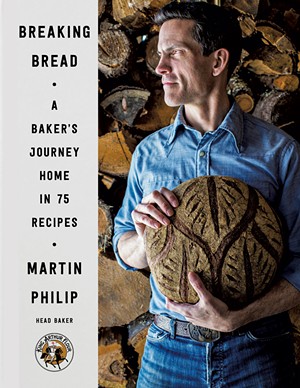 The experience of 9/11, he said in a phone interview, had also profoundly impacted his priorities. "Life is short," he said.

Philip applied three times for a King Arthur baking job before he was hired. Since then, he has risen to the position of head baker.

Physically, the "home" in his book's title refers to Vermont, where his father's ancestors landed in the late 1800s. Conceptually, it symbolizes how moving to Vermont himself helped root Philip in the world.

His Oberlin Conservatory of Music opera training, he said, taught him to persevere and also, eventually, to land on a career he is passionate about. "Music gave me this idea that you can connect what you do with your heart," explained Philip. "I also learned how to work every damn day without fail." Improvement in music, as in baking and writing, he continued, "is definitely not a straight line."

Readers of his new book will quickly realize that when Philip has a goal, he sets high standards and works tirelessly to meet them. This is a guy who began trail running and passed over short-distance competitions to go straight for ultramarathons. "I am not casual," he admits in the book. "I don't do things half-interested or part-time."

Luckily, Philip is not quite so demanding of readers. His cookbook memoir offers a range of recipes interwoven with life stories told through baking. He starts with butter biscuits and molasses pie from his Arkansas Ozarks childhood, winds on to the birthday-worthy yeasted cinnamon rolls preferred by his middle child, and concludes with ambitious, naturally leavened loaves he designed to compete in the prestigious Coupe du Monde de la Boulangerie.

You can feel Philip's disappointment when, after earning a coveted finalist spot, he is not ultimately selected to represent the U.S. in Paris. He finds solace in the sugarhouse of friends, playing music with his family, "the air filled with sticky sweetness, the vapor rising and encircling us in maple syrup clouds."

Breaking Bread is both for reading by the fire and for spattering with melted butter in the kitchen. During the writing process, Philip was awarded a fellowship at the MacDowell Colony in Peterborough, N.H. His prose is lucid and appealing, the recipes precise but soulful and brought into visual focus by his own drawings and gorgeous photography by King Arthur colleague Julia Reed. Sprinkled among the baked goods are simple, satisfying recipes for corn hoecakes, spiced lentils and pears poached in red wine.

Philip said that the narrative arc of his life guided which recipes he chose for the book. Echoing his own growth as a baker, he hopes that their progression can "meet people where they are." Recipes that he describes as "walk up and bake" are for those who have not done much baking; the "belly of the book" introduces foundational bread formulas such as for pain de mie (a soft white sandwich bread); the competition creations are "aspirational baking."

Philip's wife, Julie Ness, whom he described as "not a seasoned baker," was one of his recipe testers. "She made a lot of gorgeous bread, although she did text me a lot [with questions]," he said.

For those who do not have a master baker in their contacts list and are ready to try yeasted doughs, Philip suggested starting with Mama's Bread or the pain de mie. He urged bakers to carefully measure all ingredients by weight, manage temperatures, follow directions precisely and look for support resources online. Above all, he advised patience.

"This is craft," he said. "Just like the first rocking chair you build is not going to be perfect, [and] like, when you're making pots, you're going to throw some ugly ones. It's going to take work."

The upside of kitchen trial and error, Philip noted, is that "generally speaking, you can eat your mistakes."

In an era when so many buy prepared meals for dinner or cook from meal-kit boxes of premeasured and chopped ingredients, does Philip really think that many home cooks will roll up their sleeves and get into serious baking?

"My hope is that people are getting back to making bread and other things. I do believe that making has value. That's why I dedicated my book to hands," he said. "There is something so intrinsically satisfying about making ... For me, when I'm inside that transformational process, the lights begin to get a little bit brighter; [I] hear a little better. I think I'm not the only one.

"I want to be as awestruck as possible," Philip concluded. "Isn't that kind of the point of all this?"