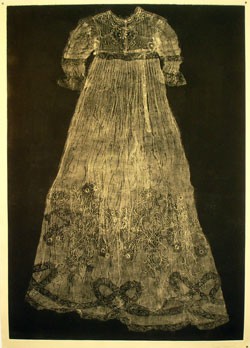 Less is more at the current show at Burlington’s 215 College Artists’ Cooperative, where printmaker Diane Gabriel and photographer Jordan Douglas present iconographic black-and-white images in their respective media. Gabriel uses lacy, delicate antique dresses as a point of departure, while Douglas finds poetry in various discarded objects found alongside the road, such as an ambrotype, flattened beer cans and a deceased frog.

Douglas teaches at St. Michael’s and Champlain colleges. His 12 prints are all silver-gelatin lith photographs. These are created through a demanding process that gives objects an ethereal quality by transforming them into pale, crisp and finely detailed images. In his artist’s statement, Douglas writes that the tecnique “is difficult to control and often unpredictable.” But, he adds, “The unstable and transformative qualities of lith printing are well suited to themes of decay and regeneration.”

“Anonymous Ambrotype” is the photograph of one such eerie negative. Douglas found the circa-1850s glass plate in a Fort Ann, New York, junk shop and translated it into a ghostly 26-by-26-inch lith print. The damaged plate holds the portrait of a young man with a big bow tie who looks like a lost soul resurrected for a rendezvous with the 21st century.

The squashed and mummified amphibian of Douglas’ 26-by-32-inch “Frog 1” embodies death directly. The road-kill leopard frog sprawls as if in mid-hop, yet it’s oddly disfigured and clearly inanimate — evidence of life extinguished in a violent, albeit random, act. Douglas comes off as an archaeologist of the modern with his images of crumpled cigarette packs, aluminum cans and other detritus found along the shoulders of highways. But beyond the implied narratives, his arrangement of visual elements shows him to be a strong formalist as well. There’s beauty in his capture of trash; subtle tonalities and visual textures make each image memorable.

Gabriel’s monotypes come from her 2008 “Carapace” series. In zoology, a carapace is part of an exoskeleton, but this Vermont artist applies the theme to the human world. She explains in her artist’s statement, “In every society clothes are carapaces of human beings.” She includes in the exhibit a 9-by-7-by-12-inch cast-iron sculpture entitled “Bodice,” which looks like a literal carapace. The hollow neck and shoulders of a vintage child’s dress evoke an abandoned shell.

For her monotypes, Gabriel sewed pieces of found and handed-down lace and old diaphanous fabrics into long dresses with high waists, like girls’ clothes of the Jane Austen era. They aren’t actual garments, however, but subtly misshapen textiles. Gabriel runs her creations through a press, rendering flattened garments with intricate layers. In “Carapace V,” a 30-by-41-inch print, the details of the dress form fine lines of negative space that stand out from the inky blackness of its background.

Most of the artist’s eight monotypes feature patterned backgrounds made from prints of natural forms. “Carapace III” has a backdrop of peacock feathers that recall the flames in Tantric Buddhist art. “Carapace VIII” is a less elaborate dress with a background of cottonwood leaf prints. Gabriel gathered the leaves, which resemble hearts, at her son’s home in New Mexico and here in Vermont.

“Carapace VII” also has an arboreal background, but Gabriel applied uneven pressure to the press to modulate background values, darkening the leaves progressively from left to right. She also reused the dress from “Carapace V,” which is more elaborate than the others, with a serpentine pattern along the hemline. Gabriel’s leaf iconography recalls early New England funerary motifs. Like Douglas, she makes transience a subtext of her imagery.

Nearly all the pieces in both artists’ offerings are dated 2008. Unlike some tandem exhibitions, this one holds no jarring contrasts as viewers pass from one body of work to the other at the small two-room gallery. In transfiguring remnants of human history, Gabriel and Douglas share similar aesthetic and conceptual concerns.