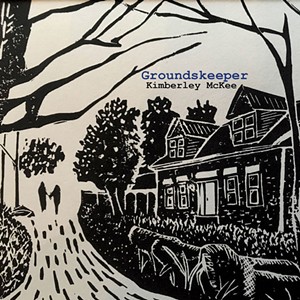 I lived in a small town in West Virginia for about two years. During that time, I was fortunate to hear live folk, roots, bluegrass and traditional American music by the likes of Cabinet, the Steel Wheels and the Kind Thieves at the local music venue and hostel. So abundant were the acoustic strains in this former mining town that I was admittedly folk and bluegrassed out by the time I moved north. Adamant musician Kimberley McKee's debut solo album Groundskeeper is nudging me back in the genres' direction.

McKee is a member of the Montpelier-area contemporary string band Two Cents in the Till. In his review of the quartet's 2018 album Greenland, writer Justin Boland praised McKee for her clean banjo playing and standout vocals, as well as her range as a songwriter.

My favorite cut, "Dance in Line," provides a snapshot of social dance culture, as well as a fiery image of a young woman who, upon seeing her sweetheart enter the grange hall with another lass, punishes the planks with her dancing shoes.

In "Another's Behalf," McKee delivers an Americana "boy, bye" to a self-centered mansplainer via creative wordplay: "My diagnosis: Self-righteous, -centered, -serving it up / Cold; gotta dig up out this hole / -y ghost of average man at most / My weakness everybody knows / And now I'm gonna take back ground."

McKee's voice and banjo work really shine on "Odds and Ends," a sweet song about how the many paths available at the start of one's life become fewer and more tangled over time.

Throughout the album, McKee's clawhammer style leaves plenty of room for her all-star backing players, including Billy Corbett on mandolin, Doug Perkins on guitar, and Colin McCaffrey on bass, guitar, fiddle and viola. McCaffrey produced, recorded, mixed and mastered the album at the Greenroom in East Montpelier.

Groundskeeper is a pleasant, sometimes sad journey to home, documented through voice and strings. Fans of Molly Tuttle and Sarah Jarosz will likely find themselves tapping their boots along with McKee's introspective acoustic tunes.

Groundskeeper is available at kimberleymckee.bandcamp.com.