They may not be Howard Stern, but two local middle schoolers are learning to ride the airwaves 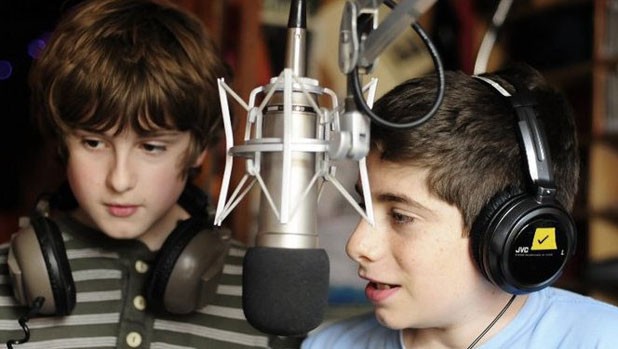 For most kids, the bell signaling the end of school hours is the most pleasing sound they will hear all day. In Pavlovian fashion, when the schoolbell rings, students race to their lockers, stuff papers in their backpacks and rush out the door. They can’t escape soon enough.

Harry Conn and Jack Reeves are no different. When the clock strikes three, the two bolt from their respective middle-school classes. They move especially fast on Tuesdays — they can’t be late for their radio show.

At 3:30 p.m. every Tuesday, Harry and Jack hit the airwaves with their eponymous program, “The Harry and Jack Show,” on 105.9 FM WOMM-LP. It’s a jumble sale of a show, featuring weather reports, movie reviews, celebrity trivia, live interviews and the occasional song. Think commercial morning drive-time radio for the preteen set.

At 12 and 11, respectively, Harry and Jack are the youngest deejays at the Burlington low-power station known as the Radiator. But don’t think they’re just kids screwing around with the mics and soundboard. They’re serious about their show and spend time planning it each week.

“The Harry and Jack Show” is a classic variety program. Despite the young deejays’ plans, there’s still a good amount of freewheeling, which is to be expected when two boys their age have unfettered access to public airwaves.

On a recent Tuesday, the show begins with a technical difficulty. The boys are down one microphone owing to a problem with one of the cables. They gamely brush it off and start the show huddled with one mic hanging between them.

“Hiiii!” they chime in unison.

While they may act pretty silly on the air, Harry and Jack are committed to the Radiator and its evolution as a community resource. In September, the duo petitioned the state’s Department of Buildings and General Services for a grant to shore up the station’s electrical system and add air conditioning to the often-sweltering studio.

The Radiator received the $3800 grant in October and sent the boys to Montpelier to accept a check from the governor. Once the electrical system has been upgraded, the station will be able to install two stand-alone air-conditioning units bought with the funds Harry and Jack helped solicit.

“The Harry and Jack Show” debuted a year ago in the 3:30-to-4:30-p.m. Tuesday time slot. At that point, Harry, a seventh grader at Edmunds Middle School, had already been on the air for nearly two years. His parents had a friend with a show on the Radiator who asked if Harry wanted to come and sit in. Eventually Harry’s radio presence evolved, and he landed his own program with another friend.

Owing to his preteen obstreperousness, Harry is unwilling to divulge his reasons for wanting to be on the air, or why he likes it. “Because radio is good, and it sounded fun” is all he will offer.

Jack, a sixth grader at Shelburne Community School, is a little more forthcoming. According to him, Harry needed a sub for the show when his first cohost couldn’t make it. He asked Jack to sit in for an afternoon, but Jack was incredulous. He didn’t believe his friend had his own show.

After subbing for a show, Jack was hooked. But he doesn’t know exactly what appealed to him about the experience. “I just wanted to be on the radio,” he says. The rest is history.

Each “Harry and Jack Show” is centered on a single artist or band. On this recent Tuesday, it’s U2 — the second or third time the boys have spotlighted the Irish band in the last year, they say. Previous shows have been built on the music of Bruce Springsteen, Radiohead, Sum 41, Three Dog Night and Michael Jackson (the early years, the deejays assure). Because of the Radiator’s low-power license, Harry and Jack are barred from playing Top 40 artists. Hence the glut of music written well before either of them was born.

In the studio, the boys continue to go back and forth, taking turns introducing their show, until Harry cues up the first U2 song — “I Will Follow,” the opening track from the band’s debut album 30 years ago.

As the song plays in the background, Harry and Jack plan out their next segment — a station identification and a few facts about their featured band.

But then technical difficulty no. 2 arises. The Internet is down. Since their celebrity birthdays and facts are saved on Harry’s Google Docs account, the two hosts noodle over how they’re going to fill the space.

The pair troubleshoots with an adult Radiator volunteer. Clearly, they are used to hiccups in their show.

Jack remains positive. “See, this is the kind of thing that happens, but it all eventually works out,” he says.

The boys exhale a collective sigh of relief when the Internet returns. The playlist advances to U2’s 1991 hit “Mysterious Ways.” When the song ends, it’s time for a mini-biography of U2, courtesy of Harry and Wikipedia.

Their show carries on this way for 30 minutes. Programming an hour of radio isn’t as easy as it looks, especially when you’re 12. There’s a lot of airtime to fill, and occasionally the boys get flummoxed, often repeating things they mentioned seconds before. But their wanderings are endearing.

They play a couple more classic U2 songs — “One” and “New Year’s Day” — before moving on to celebrity birthday announcements. Sometimes they tell jokes, but not today.

While one of the tracks plays, Harry and Jack get a call from a listener. Apparently, the broadcast is staticky because their single mic is turned up all the way. Technical difficulty no. 3.

After the halfway point, it’s time for the weather. Jack offers his assessment of meteorological conditions beyond the studio walls.

“I see darkish skies, and it’s kind of gray and sad outside,” he says, peering out the window.

From the weather, they move on to a movie review. Jack, a film buff, always writes his own critiques, and on this day it’s a somewhat lackluster appraisal of Denzel Washington’s speeding-train flick Unstoppable. He gives it three out of five stars.

“It was, like, good, but some of the stuff was unrealistic. I know it was based on a true story, but it was predictable,” Jack says.

“You knew what would happen at the end, kind of?” Harry says.

“Well, yeah. It was good, but it could be better,” Jack says.

Not exactly Roger Ebert-style skewering, but good enough to get the point across.

Jim Lockridge, one of the founders of the Radiator, loves that Harry and Jack have found a home on the radio. From the beginning, Lockridge explains, 105.9 FM has been about inclusiveness. The fact that middle schoolers share the air with established deejays is proof of the station’s community mindedness.

But, even as it helps pad the Radiator’s programming with diverse talent, giving the kids the chance to run their own radio show builds their confidence, Lockridge posits.

“If you have a young person learning that what they say is worth hearing, that puts them in a good head space,” he says. “You’re giving them the tools they need to be successful.”

Neither Lockridge nor any of the other adults at the station tell the boys what to put on their show. Aside from required public-service announcements and station IDs, the structure of “The Harry and Jack Show” is self-designed.

After playing U2’s spoken-word “Drunk Chicken/America” — which, both boys agree after the fact, is not the greatest song for radio — it’s time to sign off. But not before Harry and Jack have plugged their Facebook fan page, which to date boasts 23 fans. Then, true to their free-form style, the end arrives abruptly.

“So, I think we’re going to end our show now,” Jack says.

Listen to a clip of Harry and Jack's radio show.