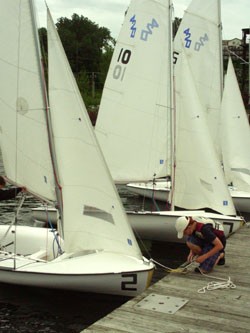 Imagine a stately yacht club with a wrap-around porch and a manicured lawn that slopes into Lake Champlain. Now picture the polar opposite. If that’s proving tricky, walk down to the Burlington waterfront and head north about a hundred yards, until you reach the Lake Champlain Community Sailing Center.

Headquartered in the basement of the decrepit Moran Plant, a former coal-fired power station that was decommissioned in 1986, the sailing center has ratty brick digs and an electric-blue paint job that give it the feel of an edgy contemporary art museum in some post-industrial Scandinavian building. But, lo and behold, on a recent Thursday morning the place is crawling with life-jacketed children, fresh from a cornucopia of affordable local summer camps.

As Vermont’s only community waterfront center, the CSC strives to make sailing, kayaking and canoeing accessible not just to adults, but to at-risk youth, as well as people with disabilities. By learning how to operate watercraft on Lake Champlain, aspiring boaters cultivate self-confidence and a spirit of environmental stewardship. Along the way, they have boatloads of fun.

Launched in 1995, the sailing center has always worked with local nonprofits to serve the needs of the region’s most vulnerable populations. It has offered programming for Burlington’s King Street Youth Center and the Killington-based nonprofit Vermont Adaptive Ski & Sports since the late 1990s. After Executive Director Kate Neubauer grabbed the tiller in 2004, the sailing center significantly expanded its list of community partners to include Spectrum Youth & Family Services, the Greater Burlington YMCA, the Howard Center, the Boys & Girls Club of Burlington and the DREAM Program, a Winooski-based nonprofit that facilitates mentoring relationships between at-risk youth and area undergraduates. User visits to the sailing center have increased from 5000 in 2003 to an anticipated 13,000 this summer.

“Sailing seems to be something that poor kids don’t even think they can do,” says Kathy Olwell, director of the New North End Youth Center. In the summers, Olwell runs a program that sends kids from Hunt and Edmunds Middle Schools down to the waterfront for 50-hour sailing courses. About half of the kids receive subsidized lunches.

The sailing center was created thanks to a 1993 Burlington City Council resolution authorizing the city’s Waterfront Commission to approve a launch site for non-motorized boats. “We have this old thing that we’re not using, and you’re welcome to use it,” city administrators noted of the Moran Plant, according to Neubauer. That location worked with the city’s “Harbor Management Plan,” she says, which restricts engine-powered craft in the northern reaches of town.

The center’s first 12 sailboats were purchased in 1997. Now the fleet has grown to the point where, on a recent Thursday morning, a visitor has trouble counting the number of white sails fluttering in teal-colored Lake Champlain against an Adirondack backdrop. And that’s not including the dozens of other sailboats, kayaks and canoes waiting patiently in the shadow of the Moran Plant’s rusted-out metal scaffolding.

Neubauer, a dynamic 30-year-old with brown hair, emerges from the office wearing jeans, black sunglasses and a red life vest. She came to the sailing center in 2004 fresh from a year working as an AmeriCorps VISTA community organizer for Burlington’s Community and Economic Development Office (CEDO). Government work was nice, recalls the Rhode Island native, but it left her curious to understand how nonprofits worked with cities to solve problems.

Neubauer’s VISTA experience helped her deduce that the center wasn’t adequately serving Burlington’s most vulnerable communities; she started making contacts and raising money with an eye toward expanding programming. “I didn’t come to the sailing center because of sailing,” she says, gazing out at the lake. “I came because it was a program giving an opportunity to people who otherwise wouldn’t have it.”

Around noon, Gabriel Diaz and a crew of elementary-school-age sailors tie their sailboats to the docks and head ashore. The students, six of them refugees, have been participating in the sailing center’s 1-year-old LeaderSHIP program, a youth-development initiative that links sailing with confidence building. If these kids weren’t sailing, says Diaz, a paraeducator at Hunt Middle School, “they’d have nothing else to do but hang out on the street.”

As Diaz leads the children to the nearby ECHO Lake Aquarium and Science Center for lunch, Neubauer greets Evan LeCompte, director of the YMCA’s “Y’s Guys” summer program. The YMCA began sending campers to the sailing center two years ago, supplementing trips to such places as Centennial Field and a local bowling alley, LeCompte explains. He says he’s not surprised that his charges have a blast on the water, considering that “99.9 percent” of their parents don’t own boats.

Christopher Brown, who directs the Winooski-based DREAM program, is similarly enthusiastic about the sailing center. Founded in 1999, DREAM connects at-risk children with mentors from seven colleges in Vermont and New Hampshire. The sailing center has enabled mentors and mentees to hang out on the lake together. “For a nonprofit organization such as ours that thrives on the generosity of others,” Brown wrote in a recent letter, “the ability to be part of this program at no cost has been truly invaluable.”

That assessment would resonate with Kathy Olwell. She says parents are “ecstatic” to learn that their kids are sailing; if kids weren’t engaged in structured activities, they’d be at greater risk for drug use and teen pregnancy. “I’d never heard of such a thing until they opened up down there!” Olwell continues. “I always thought of sailing as being for someone who has a sailboat and who’s upper-middle-class to wealthy.”

Olwell’s praise underscores two challenges facing the sailing center: location and image. With facilities that aren’t immediately visible from the Burlington Bike Path, the place doesn’t have “walk-up exposure,” according to a recent strategic plan. What’s more, its sailing-heavy name can evoke “images of elitism.” (Neubauer says a forthcoming name change will better reflect the full scope of the center’s mission.)

Those challenges may soon be distant memories. In March, Burlington voters approved a resolution that lays out an “adaptive reuse” plan for turning the Moran Plant into a mixed-use recreational space. In addition to a renovated sailing center that includes year-round classrooms and a new boat-storage facility, the plan includes a restaurant, a children’s museum and an indoor ice- and rock-climbing facility. A revitalized Moran Plant will mean a permanent home for the sailing center, Neubauer says. And not a moment too soon: She’s tired of working in an office that doesn’t have running water or heat.

With more visibility and year-round programming, Neubauer predicts, the sailing center could expand to include whatever programming works, given Vermont weather and the needs of the Burlington community. A member of the Community Sailing Council of the Rhode-Island-based United States Sailing Association, Neubauer says that other community waterfront centers around the country offer water-based art and therapy classes. In other words, the sky’s — or the horizon’s — the limit.

Construction of the revamped sailing center is tentatively expected to wrap by 2010. As part of the Moran redevelopment project, officials at the center, which had assets valued at $215,134 in 2006, hope to raise $3 million. “That’s the next challenge,” Neubauer says with a laugh. “We’re ready, but it’s a challenge.”

In the meantime, there’s plenty of fun to be had. As Neubauer strolls out onto the docks, Diaz leads his aspiring sailors to the ECHO Center for a lunch of hot dogs and potato chips. The kids, Diaz explains, are here with “Barnes World Academy,” a joint project of the Sarah Holbrook Community Center and Burlington’s Department of Parks and Recreation. Parents pay $25 per week for the camp, and sailing instruction is free. A camp administrator says the sailing center gives most of these campers a chance to see their own city from the waves for the very first time.

While waiting for their food in the bright, noisy ECHO cafeteria, Diaz’s campers wax nostalgic about their first adventures on Lake Champlain. “It was so fun because you get to see stuff!” one says over the racket. They’re quick to specify which stuff: double-bodied dragonflies, seaweed and fish, other boats . . .

“It was scary at first!” a smiling African boy with a shaved head chimes in from the end of the table.

“It was somewhat scary and somewhat fun,” notes the oldest boy in the bunch, an Old North End native who graduated from Barnes Elementary in June.

Why was it somewhat scary? “I’ve never been in a sailboat before, and I didn’t know they tipped.” Why somewhat fun? “It’s fun when you tip over!”