Kidding Around at Ollie's Other Place 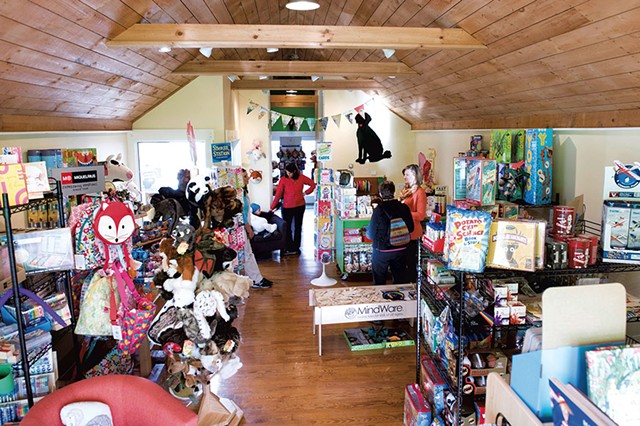 Until recently, if you were looking to buy kids' toys in Middlebury, there were a few options, each with its own niche. T.J.Maxx and Ben Franklin Store for cheap plastic products. Clementine for precious, pretty baby things. And Maple Landmark Woodcraft for wooden classics. Now there's a place to go for a wide range of high-quality toys and books: Ollie's Other Place.

Becky Dayton owns both Ollie's and the Vermont Book Shop on Middlebury's Main Street. She admitted that she opened the kids' store last month in part because she was "panicking" about the Vermont Agency of Transportation's plan to make major repairs to the infrastructure that supports two railroad bridges — both smack-dab in the middle of downtown.

Dayton reasoned that if construction forced her to close up shop on Main Street, she could move the contents of her bookstore to the Ollie's building. "This itty-bitty space would be perfect if the shit hits the fan," she said of the 900-square-foot store.

They appear to have succeeded. On a recent afternoon a few weeks before Christmas, the place was swarming with shoppers of all ages.

When you walk into Ollie's Other Place, it's obvious the owners are book lovers. The most prominent display is a shelf filled with classic children's literature — Madeline and The Story of Babar — and newer classics by authors such as Rosemary Wells and Mo Willems. Local authors and illustrators, including John Churchman and Ashley Wolff, are also represented.

The next thing you're likely to see is a giant — 63-by-36-inch — whimsical coloring poster of the United States. Named Let's Color America, from a company called Pirasta, it's tacked on the wall low enough for toddlers to reach. Cups filled with markers are set up nearby so patrons of any age can draw on the walls.

She noted that Lyons' influence is evident in the merchandise. "She has an 11-year-old son who is very bright and curious," Dayton explained.

That curious boy, Jack, was at the store on a recent afternoon showing off some of his favorite toys. He's tried many, including the Woolbuddy felting kits.

"He didn't follow the kit," Lyons admitted, "but I was amused at how he was able to make up his own thing using the materials."

Jack is a huge fan of KEVA planks, simple pine building blocks, each precisely the same size — a quarter-inch thick, three-quarters of an inch wide and four-and-a-half inches long — that can be stacked and arranged in captivating ways. At Ollie's, they're laid out on a low table so children can play with them.

Dayton and Lyons also offer wooden baby and toddler toys from HABA; eco-friendly finger paints, play dough and crayons by eco-kids; ArtFolio sets from the Piggy Story, which each include a drawing pad and 12 crayons tucked in an adorable case; Folkmanis Puppets (there's even a turkey!); and Miquelrius backpacks.

Some gifts come with altruism: Buy Tegu magnetic wooden blocks, and the company will plant 12 trees or fund one day of school for a child in Honduras.

Cute plush animal heads — fox, lamb, cow — adorn Ollie's walls; they're made from eco-friendly materials by a line of kids' décor called Fiona Walker England. Smaller versions of these animals, with coat hooks attached, line the narrow hallway to a baby section at the back of the store. There you'll find squeaky toys and slippers that look like monster feet (from the Winooski-based company Rich Frog), and old-fashioned wooden push- and pull-toys by Manny and Simon.

Ollie's rounds out its dizzying array of colorful merch with a rack of 3D greeting cards, stacks of board games and letters made from recycled board books.

But who is Ollie? That would be Dayton's 8-year-old springerdoodle. A cutout silhouette of the dog — all black save for a bright-red tongue — was created by Vermont artist Woody Jackson. One likeness of Ollie hangs behind the cash register, another above the store's exterior entrance.

Says Dayton of her pup: "He would be here if he were better behaved."

The original print version of this article was headlined "Kidding Around"