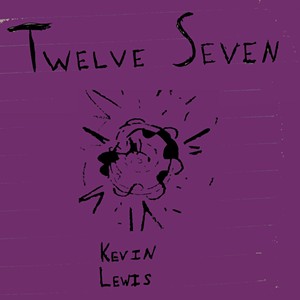 On Twelve Seven, his fourth full-length LP, Kevin Lewis continues his one-man-band show. The Burlington-based songwriter has embraced the solitude of doing everything himself: playing guitar and bass, programming the drums, singing, and even mixing and mastering.

While the record isn't Lewis' first attempt at producing an album in the fashion of an auteur, it is his most successful to date and captures a distinctive sound. Last year's Music Destroyer had moments of true inspiration — the ideas were there, but the execution was inconsistent.

Opener "Dreams" comes in hot, riding a programmed four-on-the-floor beat before the guitar kicks in. This song about the aftereffects of grief masquerades as a jaunty rocker. "Can I even call these dreams where I see you a nightmare?" Lewis sings. Sometimes soaring at the chorus, his vocal work throughout is a cut above his earlier efforts.

"What Happened" and "Push and Pull" introduce a pop angle to Lewis' otherwise punk-laden material. Both songs are restrained compared to his earlier music. Yet by breaking from his previous songwriting formula, each displays an adventurous streak that broadens Lewis' artistic scope. For instance, a song like "Come Around" wouldn't have fit on Music Destroyer. Built around a slow guitar groove and highlighting Sarah Mundi's deft vocal harmonies, the song crafts a tone that Lewis hasn't used before.

When the album veers back to heaviness, there are a few inevitable hiccups. The ferocious "Got No Time" hits like a ton of bricks, but the MIDI drums just can't match the song's intensity. That goes for "Light," as well. Programmed drums serve some of Lewis' songs adequately but generally don't pull their weight on the record.

The high-water mark for Twelve Seven is closing track "Holding On." The song is decidedly laid-back and provides ample opportunity for Lewis' extended guitar solos. "Maybe what we need to be is together holding on," he croons. It's a lyric that could certainly take on added meaning after the last year or so. The track builds until it turns into a "Hey Jude"-style sing-along, with Lewis repeating the final line over and over again.

It's rare in music for an artist to be celebrated simply for getting better. But on Twelve Seven, Lewis has clearly, well, gotten better. His melodies are stronger, as are his arrangements. It would be interesting to see him assemble a band to play this record live, now that such a thing is possible again. I suspect the energy of a live band would color in some of the album's blander moments.