Kevin Greenblott, Let the Lover Thru 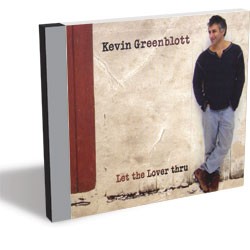 Kevin Greenblott seems like a really nice guy. Like, the kind of guy who would loan you his lawn mower and not say a word when you returned it a month later busted and out of gas. In other words, “Kev, ” as the Burlington-based songwriter refers to himself on his website, is nice to a fault. While that’s an admirable quality in a neighbor, it is less so in a songwriter. Unfortunately, an eager-to-please blandness, coupled with an obsession with Bob Dylan, pervades Greenblott’s latest album, Let the Lover thru.

Lover begins with “I Wanna Know You.” Greenblott has been playing guitar for 20 years, and his chops are evident in the song’s finely fingerpicked acoustic intro. Also evident is that affinity for Dylan. Greenblott models his vocal delivery on the legendary Mr. Zimmerman, copping similar stylistic inflections, particularly at the ends of phrases, which tend to fade breathily away. Greenblott also takes similar liberties with pitch, which you can get away with if you’re Bob Dylan. Kevin Greenblott is not.

Of course, no one is – not even Dylan, really. And it would be grossly unfair to compare the two. The problem is that Greenblott aims impossibly high, bluntly clawing at Dylanesque profundity when artful simplicity is called for. The result is a collection of clumsy, earnest and at times grating lyrical platitudes.

On “Are You Ready for Joy” Greenblott sings, “In the moments ‘tween our busy works, in the laughter we deny / In the arms of friendship, in the blueness of the sky / Behind our illusions, in our enemies eyes / Deep in our hearts I know that joy is alive.”

From “Picasso”: “In this world we’ve got two kinds of prisons. / One’s made of stone and the other’s made of thoughts.”

From “Drugs”: “Drugs, I take ‘em every day. Little illusions, they help ease the pain. / The pain of illusions. I got somehow fooled into believing I was less than cool. / So I’m on all fours, looking for a fix, to put me where I already exist.” “Subterranean Homesick Blues” it ain’t.

Fittingly, Greenblott closes the album with “Song to Bob.” Like each of the preceding cuts, he borrows a familiar melodic structure and proceeds to pay homage to his hero. In a sequence that fairly sums up the record, Greenblott sings, “Hey, Mr. Dylan I wrote you a song. / A letter, a poem, a thanks of some kind.” And then, a few lines later, “So something old, so something new. See, I wrote the words, but the tune, it’s all you.” Indeed.

Kevin Greenblott celebrates the release of Let the Lover thru this Saturday, April 24, at the Firehouse Gallery in Burlington.