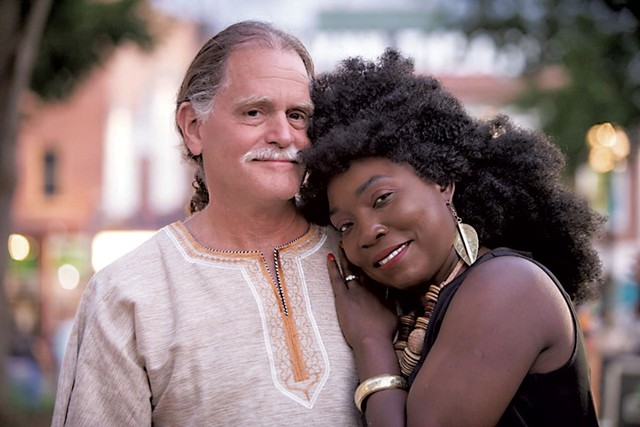 It was a rainy night in Nairobi, Kenya, back in March 2003, when Irene Kerubo met up with Michael Webster, a Vermont guitarist looking to start a new project. Kerubo was a talented backup singer who had worked with artists such as Kenyan Afro-jazz star Achieng Abura. She knew Webster was looking for a lead singer, though — someone to front a band. It was time to challenge herself and step out of the shadows, she decided.

"The people we were playing to in Nairobi, they wanted to drink beer and hear the blues," Michael, 61, recalls, sitting with Irene, 53, at a Burlington restaurant 18 years later.

"It was not a genre that I had ever embraced," Irene admits. "I had to learn how to sing those kind of songs. But Michael helped me, and that was how we met, him teaching me to sing the blues."

That meeting changed both their lives. Michael's band came to be known as KeruBlues, and the two joined forces in another way, marrying in 2007. These days, Irene (who now shares Webster's last name) lives in Vermont and no longer plays unfamiliar music. She performs as KeruBo, singing a fusion of world music and Afro-jazz songs, which she writes in multiple languages — songs full of messages of hope, perseverance and embracing one's own beauty. In May, she and Michael released KeruBo's debut album, Hali Ya Utu.

"It is Swahili," Irene says of the album title. "It means 'state of humanity.' I chose that title because every song on the record touches on the way we human beings exist together."

Irene speaks softly, but there's a palpable power in her voice. By her side, her husband is more frenetic, talking with his hands and lighting up with pride as he discusses the challenges his partner has overcome. For instance, in 2015, four years after the couple moved to Burlington, Irene had a near-fatal aneurysm.

"She was in a coma for a while, and — honestly? — I was scared," Michael recalls, anxiety from the event still in his voice. "But Irene, she's strong. Here is someone that a doctor at the University of Vermont said wasn't likely to even make it. Can you imagine? But she survived."

Irene inclines her head, accepting the compliment and smiling at her husband. But her survival was no easy feat. For a time, she lost her ability to speak.

"I would have moments when I would know what I wanted to say but couldn't get the words out," she explains. "And I speak multiple languages, so, for instance, I would remember part of a word in Swahili and the other in my mother dialect, which is Kisii. It was incredibly frustrating."

She places her hand on Michael's knee. "And, of course, he still hovers like a helicopter around me," she says with a laugh.

"I told myself that if I did survive, I didn't want anyone else to feel hopeless," she continues. "I said that all the songs I'll sing will be to give people a feeling of hope for tomorrow. Healing through song, that's my motive."

Hali Ya Utu is an exuberant blend of modern beats, Afro-jazz and what Irene describes as the "dressings of African music." The record is designed to connect human to human: These are songs of pure, undiluted empathy.

"Healing through song, that's my motive." Irene Webster tweet this

"You Are Enough," for example, was written after a conversation with a young girl in the New American community. Irene works for AALV, a Burlington-based nonprofit that helps new residents transition to America.

"This girl, she was going to school with all white people," Irene recalls. "So, you know, they all had long hair, and she wasn't confident without her extensions; her mother hadn't had time that day to help her.

"So she was crying and feeling like she couldn't fit in," she continues. "I sat her down and told her she was enough, that she is beautiful as herself. I thought about it afterwards and wrote the song as a message: We're all beautiful enough as we are."

Some songs have been in Irene's back pocket for years. She wrote "Inga Obwanchani" — Kisii for "give me love" — as she watched children beg for money on the streets of Nairobi.

"Their parents were likely dead, or too poor, so they were sent out into the streets," Irene explains somberly. "People were ignoring them as if they were invisible. And I could see in this boy's eyes: He needed love. He needed to be nurtured, to be a kid."

Michael reminds his wife about another subject that informs their music.

"Of course not," she says with a wry grin at his casual phrasing.

"COVID has been tough for everyone," she continues. "But New Americans have gone through so much trauma. They had to quarantine in a place where they are isolated with few support systems."

She wrote "Hakuna Lolote" in recognition of that plight. It's an uplifting number that urges people to keep their heads up. "A brighter day is coming," she sings.

Another "COVID song" doesn't appear on Hali Ya Utu but has been shared on local social media, as well as by AALV and the Florida Department of Health. It's a tune called "Chanjo" — Swahili for "vaccine." The song was enough of a viral hit to warrant an audience with Second Gentleman of the United States Douglas Emhoff when he visited Vermont in April.

"Irene was upset by all these stories she was hearing among the community," Michael says. "People were talking about the vaccine killing people, all that nonsense. So we wanted to get a track out to educate people — something to let them know it was safe and for all our benefit."

In the video for the song, Irene is shown receiving her COVID-19 vaccine. She hopes refugee populations will follow her example.

"You never know until you try something, but it worked," Irene says of the video. "The kids loved it; they came and danced. And some of them were definitely persuaded to get the vaccine. There was hesitancy at first, but they just needed time."

Now that Vermont has lifted its COVID-19 restrictions, the couple has begun reestablishing their live act, which had gained an excellent reputation around the state before the pandemic. They've booked a growing number of gigs, including at the Middlebury Festival on the Green on Monday, August 2, and shows with roots-rock and soul act Dwight & Nicole.

"I'm a little bit enamored with [Irene]," Nicole Nelson, bassist and co-lead singer of that band, says by phone. "She's so regal. I've never met someone in real life that carries that aura."

Irene first joined Dwight & Nicole onstage at the Burlington Discover Jazz Festival in June and followed with a barnstorming set during Juneteenth celebrations. She'll next join them at Higher Ground Presents' Backside 405 series on Saturday, July 31.

"When we play together, there's this familial feeling," Nelson explains. "When you sing with her, it's just such a special thing."

Irene is still hyper-focused on her New American community and sees herself as something of an ambassador. She invites kids to come by after school to her and Michael's home, where there's a modest studio. Students record songs they've written and sometimes shoot videos. Since many refugees had traumatic histories in their home countries, the two musicians feel strongly about providing a safe place for kids to just be themselves.

"I have so many songs that stem from stories the refugees have told me over the years," Irene says. "They have so many human experiences that need to be talked about."

While she and Michael are currently focused on producing more singles, Irene foresees one day putting out an album even more explicit in its message of togetherness.

"I feel right at home in this music scene," she asserts. "I love that people here embrace my music. It makes me feel connected to my heritage, my roots."

She hopes to sell some copies of Hali Ya Utu in order to fund a second LP, but that isn't why she made the album.

"Music has never, ever been about making money for me," she says. "It's all so much bigger than that. It's about being human and being together in life."

KeruBo performs on Monday, August 2, 7 p.m., at the Middlebury Festival on the Green. Find details at festivalonthegreen.org.