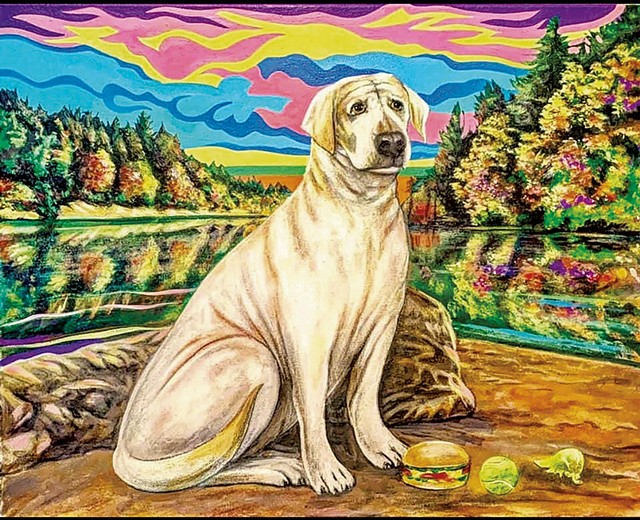 Kenny Dale did not anticipate that his art career would include pet portraiture, even if he did think of his family's dogs and cats as de facto siblings. But when he was about 13, his mom asked him to paint a memorial image of their dog Lucifer. "That's how it started," he said over coffee at Scout on North Avenue in Burlington last week. "I never thought it would come back around."

But it did. Dale said he painted animals off and on over the years — not all of them deceased, he clarified — but a request for another memorial portrait during the pandemic seemed to pick up the pace of commissions. "Then I heard from some cousins who wanted portraits. Then it was, 'Do you do cats?'" he said. "I would do a turtle. I'd do a frog, a fish, anything."

Many of his paintings are cataloged on a dedicated Instagram account, @uncommon_pet_portraits. Scrolling through the images makes it clear why they merit that description. Dale's graphic style and vivid, opaque palette set his works apart from more conventional renderings of beloved furry friends.

"It's a celebration of the wonderful creature that has given you so much." Kenny Dale tweet this

Dale, 56, cuts a colorful figure himself. His sartorial choices favor offbeat thrift-shop finds, animal prints and handmade items, such as a hat expertly crocheted by his partner, Abbi Stern. He wears not one but two silver skull rings, also Stern's handiwork. Dale's left arm is tattooed in large capital letters: "SOUTH SIDE" — he's a proud native of that area of Chicago. His right arm bears the motto "STAY GOLD," which comes from a line in the film The Outsiders, Dale explained. "It basically means 'Don't lose your shine,'" he said. "I got it on my 50th birthday." 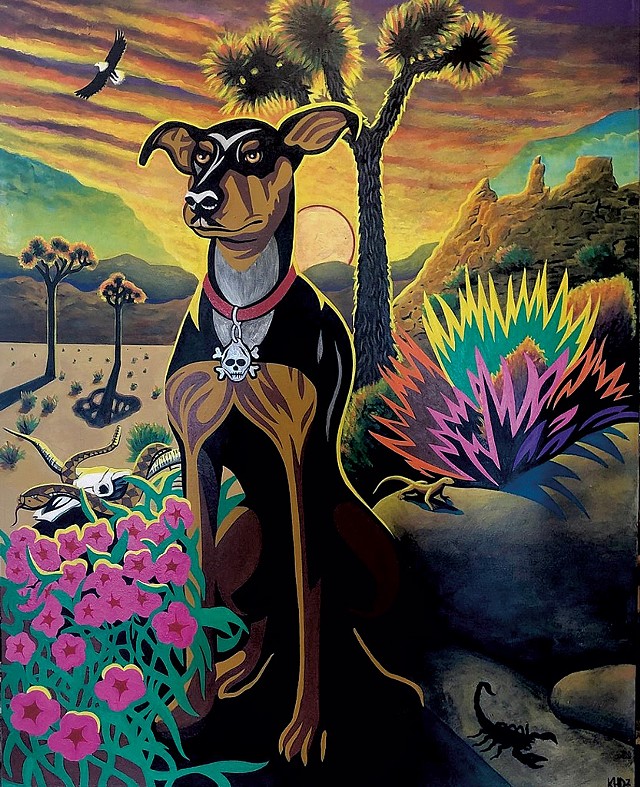 Dale attended Valparaiso University in Indiana on a scholarship for vocal music but switched to studio art. ("They let me keep my scholarship," he noted.) After graduation in 1989, "I took my art degree and went back to music," Dale said with a wry grin. First, he and some friends from high school formed an a cappella boy band in Chicago. Five years later, Dale joined his brother in New York City to start a rock band.

Dale immersed himself in the city's underground art and music scene, performing as well as painting. He exhibited and sold his work "mostly in bars and nightclubs," he said, and eschewed the tonier gallery circuit. For a few years after 9/11, Dale coordinated an afterschool art program for a nonprofit in Lower Manhattan, working with kids in first grade to middle school.

During this time, a move to Brooklyn proved pivotal to his own artwork. Dale settled in Red Hook, a formerly thriving port. He began to paint its skeletal shipyard infrastructure silhouetted against "trippy skies" and sunsets over New Jersey. "I think that brought out my palette," he said. In Brooklyn, too, he had his first gallery show.

The pandemic changed everything. Dale and Stern escaped the city when COVID-19 arrived, trading Brooklyn for the relative safety of her parents' home in Shelburne. Then the couple decided to make the exodus permanent, after some 15 years of urban dwelling. "We just weren't enjoying New York anymore," Dale said. 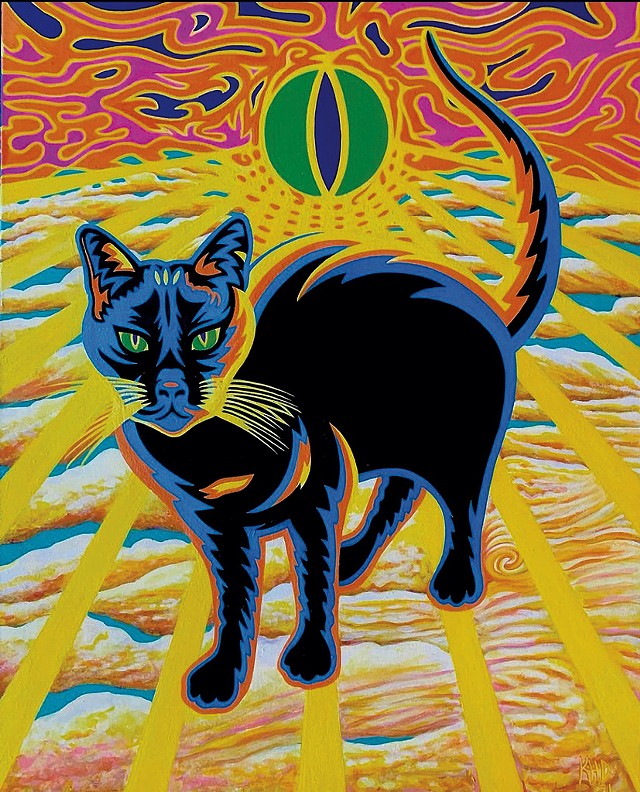 They moved into a Burlington apartment, along with their dog, Basil, and their cat, Blondie (yes, named after Debbie Harry). Now, Dale is getting used to calling himself a Vermont artist. He takes early morning rides on his e-bike to explore his new city and has discovered distant relatives buried in a nearby graveyard. He takes photos of Lake Champlain — "The visuals here are stunning!" Dale marveled — and of bucolic fields and bovines. He's investigating the local art community and searching for a studio, but for now his easel is set up at home.

On the occasion of Seven Days' Animal Issue, Dale readily agreed to talk about his approach to pet portraiture.

You had a formal art education in college, but what influenced your graphic style?

Growing up in the '70s and '80s, you get hit over the head with comics, stickers, album covers. Street art, too. I trusted my eye and composition, but over time [I've gotten] a little more painterly — more mixing of paint colors.

Other than the intense colors, what do you think makes your portraits stand out?

When you think of pet portraits, you think of realism. I tend to look at a photograph of an animal and try to decipher their personality. [There's also] a sense of humor.

It's not a style for everybody. But I haven't had a disappointed pet owner yet.

If people didn't like your style, I don't think they would hire you.

True. It weeds out the rejections.

What paint do you use?

I don't have the attention span for oil. I use acrylic — you just put it down.

Do you always work from photographs?

Yes, multiple photos, and I ask [the pet owner] about settings, favorite toys, places the animal liked to play, etc. I try to get as much stuff as I can. The feeling of the pet is what I'm trying to get on canvas. If people think their pet is special, I want them to get something special. I'm not going to give them a photo back.

Also, more than half the time the portrait is a gift, so it's important to know who the recipient is.

You mentioned that the paintings made you think of Renaissance portraits, with the subject prominent and things in the background that conveyed something about them.

Yes, I want the animals to be icons. I want them to almost bounce out. They're pure, unconditionally loving creatures, but they're also individuals. For example, a black cat is never just a black cat — they're magic!

I want the [owner] to feel like their pet is immortalized in the portrait. It's a celebration of the wonderful creature that has given you so much.

How long does it take you to create a pet portrait?

It usually takes me about three weeks, working off and on.

You're working on other paintings, too, I see.

Yes, I just posted a painting of Lake Champlain ["Red Dog Dusk"]. But the pet portraits have been a nice vehicle to develop my style. There's a commission, but I can do it my way. I want to think it's improved me as an artist.