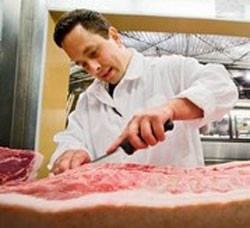 A familiar face is missing behind the meat counter at Healthy Living Market. Longtime butcher Frank Pace cut his last steak for the market on May 4. A trained chef with an enviable background in the San Francisco dining scene, Pace is heading back to the restaurant world, but not to the line.

Instead, he’s taken on the role of in-house butcher for Catamount Hospitality, the restaurant company that owns Burlington’s Farmhouse Tap & Grill and El Cortijo Taqueria Y Cantina. Soon to join the group: Guild & Company, the steakhouse that will open in the former Ground Round space on Williston Road in South Burlington. According to Pace, the restaurant will most likely open early this fall.

Right now, the chef is keeping himself occupied with the 80-hour-a-week demands of his own business, Pace Catering. Besides providing food for parties and weddings, Pace is consulting with Hardwick Beef on its own burgeoning catering company. Its wares will be showcased at Stowe’s Celebrate Vermont Festival, this August 23 to 26, where Pace says to look for a whole steer roasting over what he terms “a meat trapeze.”

In the coming months, Pace will focus full time on Catamount Hospitality’s demands. He and chef Phillip Clayton are designing everything they’ll need in a kitchen with the help of Kitchen, Restaurant + Bar Specialists, the design company behind the kitchen at the new Hotel Vermont. The meat-preparation wonderland will include a grill and rotisserie, both wood fired. Thanks to his experimentation at Healthy Living, Pace says he has his dry-aging method for beef “down pretty well to a science.” Charcuterie will be dry-cured in-house, too.

Once Guild & Company is ready to open, Pace will return to the job of a butcher, sourcing Vermont’s best beef and cutting it into steaks for the restaurant. He says he’s already been in touch with LaPlatte River Angus Farm and is in talks with Boyden Farm. Here’s to moo-ving on.