Vermont Kosher makes approved food at UVM and beyond 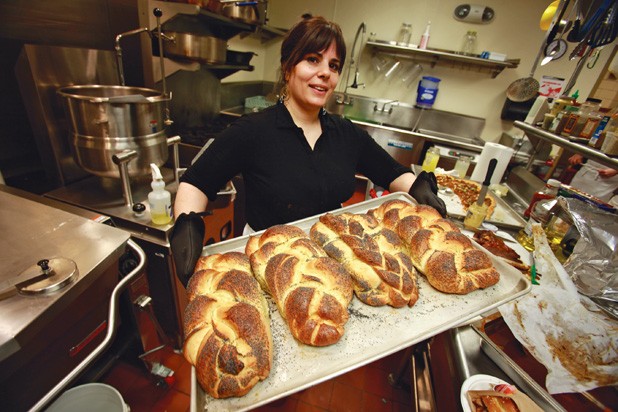 When Rachel Jacobs first started cooking kosher at the University of Vermont, she encountered an uncommon problem. The university’s Sodexo employees approached her with too much reverence. “They would talk to me from just outside the door,” says Jacobs. “When I asked why, they said, ‘We’re not blessed.’ I had to tell them, ‘Everyone is blessed.’ It’s not about being Jewish, just about keeping the rules.”

“Keeping the rules” isn’t always easy at UVM — or, more generally, in Burlington. Between 1880 and the 1920s, hundreds of new, mostly Russian Jews settled in the city — enough so that the area surrounding Ohavi Zedek Synagogue on North Prospect Street was known as “Little Jerusalem.” Today, just less than 6 percent of people in Burlington identifies as Jewish, but many of them have long been secularized and don’t make a habit of keeping kosher.

At UVM, that’s changing. The strong Chabad community run by Rabbi Zalman Wilhelm, Chabad @ UVM, has made Burlington a destination for a growing number of religious college students. “We’ve had more and more Jewish students coming to UVM in recent years. We’re constantly getting questions from potential students if they’ll be able to keep kosher,” says Wilhelm, who opens his home to students for Sabbath dinners each Friday night.

Now they can, and not just on the Sabbath. In August, Jacobs moved her catering business, Vermont Kosher, to its very own kitchen headquartered at Redstone Unlimited Dining, Redstone Campus’ sprawling cafeteria. Under the hashgacha (supervision) of Chabad @ UVM, Jacobs provides hot dinners at Redstone Sunday through Thursday, and sends grab-and-go meals to six other dining outlets so the school’s 150 kosher students can get convenient and delicious, Israeli-influenced food throughout the week.

Jacobs, with her round, deep-brown eyes and thick, dark hair, is of Spanish and Moroccan descent. She left her native Israel for South Royalton in 1992, at age 23, when she married a Vermonter. Though her grandmother was a noted Moroccan cook, Jacobs says she herself never took to the stove until necessity forced her to make all of her food at home. “Technically, I couldn’t eat anywhere,” she says of her early days in the United States. She spent them learning English by watching television — notably “Seinfeld” and the O.J. Simpson trial — and practicing her cooking skills.

Once she became adept at re-creating her family recipes by copying the smells and textures she remembered, Jacobs began inviting larger and larger crowds to her Sabbath dinners. By then, the meals were in Burlington, where the Jacobses moved their family of five in 1999. Vermont Kosher began to jell in the new cook’s mind when she prepared a Tu B’Shevat (Jewish Arbor Day) dinner for 30.

Jacobs, already known in the Burlington Jewish community for teaching Hebrew, began getting requests from locals and out-of-staters seeking brisket, schnitzel and grain-based salads for weddings and bar mitzvahs. Her first massive undertaking was “the rabbi’s daughter’s wedding for 400 people at the Hilton. I thought, I cater parties for a hundred. Four hundred is only four times more,” Jacobs recalls. Now she employs a team of six, with three people working in the small kitchen at once.

The university is Vermont Kosher’s largest client, but not its only one. Last week, Jacobs and her crew were prepping their usual week’s meals for UVM; they were also in their third week of providing packaged meals to members of a Canadian hockey team playing in Lake Placid. Orthodox Jews are sometimes limited in their travel by dietary concerns, Jacobs notes, so her business serves as an ambassador to those communities. “Vermont Kosher is to say to other people, ‘Choose Vermont as your destination,’” she says. “‘Choose it for school. Choose it for business. Choose it for vacation.’”

Once catering clients have chosen Vermont Kosher, they must choose whether they want their meals to include dairy or meat. The Torah states, “Do not cook a kid in its mother’s milk.” Therefore, the two can’t be mixed in a kosher kitchen — or on the plate. No dairy has ever entered the UVM facility. When Ashkenazi Jews need their lox and cream cheese for a bar mitzvah, Jacobs prepares the meal in her home kitchen, where she has separate storage areas, pans and other tools to keep meat and dairy apart.

Thanks to renovations last spring, Vermont Kosher’s kitchen at Redstone was all new and kosher. Only the oven in which Jacobs bakes her bread was used, and therefore potentially treifah, or nonkosher. Following the rabbi’s instructions, Jacobs’ husband cleaned the oven three times, then torched the interior in order to eliminate anything that could potentially transfer smell or taste. The cook herself immersed, or toiveled, trays and utensils in a ritual mikvah, a bath of pure rainwater. Due to laws called bishul Yisroel, a Shabbat-observant Jew must light ovens. To make sure even non-Jews working in the kitchen are able to cook, Vermont Kosher’s pilot light is always on.

On a recent Thursday afternoon, Jacobs can barely keep count of all the dishes she is making at once. She runs from one end of the kitchen to the other to check on one employee’s progress filling challah rolls with portobello mushrooms and fresh veggies, and another’s work cutting vegetables for a lemon-cured, chopped salad. As she checks her own loaves of braided challah, Jacobs pushes aside several cans of Labatt Blue, embarrassed. “The beer is for the brisket,” she says. “We don’t drink on the job.”

The smell of the tender meat and sweet onions, which cook for more than four hours, fills the room. In Israel, Jacobs says, she ate braised turkey more often than beef. She learned to make brisket to satisfy her Ashkenazi husband, whose family is originally from Russia.

The flavors of the beef are all hers, though. The beer, plenty of garlic, hot peppers and a shot of maple syrup give the meat a spiciness that lingers on the lips even when it’s served inside a half-whole-wheat challah roll. The beef comes from a small kosher butcher in Brooklyn, as do the rest of Vermont Kosher’s meats. Jacobs orders food two months ahead and freezes what she doesn’t use immediately. In season, nearly all of her produce comes from Soul Fresh Farm in Charlotte, run by a recent UVM grad. She gets less common veggies, such as Jerusalem artichokes, from City Market, which also keeps kosher wine chilled specially for her to relax with after long, stressful days.

Jacobs’ exotic tastes have begun to attract a nonstudent following, she says. (Those not affiliated with UVM can purchase the hot meals at Redstone for $15; the sandwiches go for around $8.50 to all comers.) She’s become friendly with an Indian man who enjoys her subtle, aromatically spiced shawarma wraps, filled with fresh, tangy vegetables. They come with a side of carrot, beet and apple salad sweet enough to please any palate. “A guy from New York loves the brisket,” says Jacobs. “We have regulars who want this international food.” In fact, she estimates that 80 percent of her customers buy the food for its taste, not its kashruth.

Her dishes include native Israeli specialties, such as turkey schnitzel and soft, citrus-flavored eggplant called chatzilim, but also Moroccan ones influenced by Jacobs’ grandmother’s pastry skills. There are potato-filled pies called boreka and Moroccan pizzas covered with beef. In Morocco, the ground meat would probably be lamb, but prices preclude that stateside. Same with the use of fresh tamarind, which Jacobs replaces with maple syrup — one of her favorite ingredients and one she regularly includes as a nod to her adopted homeland. The pizza is perfumed with ras el hanout, a Moroccan blend of close to a dozen spices, including cinnamon, cloves, turmeric and cumin. Raisins and onions add sweetness, pine nuts contribute a crunchy nuttiness, and cilantro makes the whole thing refreshing.

One thing diners won’t find on the pizza is cheese, even a kosher vegan substitute. “We have so much other food,” says Jacobs. “I’m not into things made to be like other things, like vegan cheese. Shrimp is shrimp, and fake shrimp is fake shrimp,” she adds, referring to the prohibition against shellfish. “If you want sushi, have tuna or salmon.”

Indeed, Jacobs uses mostly whole, fresh foods and says she tries to adapt the ingredients of all her recipes to what’s available in Vermont. She hopes one day to write a cookbook called From the Atlas Mountains to the Green Mountains to explain the stories behind her unique Middle Eastern/Vermont fusion.

The mother of three teenagers has also become a role model for the young Jews who work for her. Ask Molly Bortin, a UVM senior from a “conservative Jewish household” who rents an apartment above Jacobs’ home. “Ever since I’ve lived there, Rachel has had a huge impact on how I eat,” Bortin says. “It’s influenced me a lot. I’m a dietetics major, so she has had a huge impact.”

Of course, having a place to eat kosher Israeli and Moroccan food is a boon for foodies and observant Jews alike. But it’s the students who are closest to Jacobs’ heart. “We want to be a destination, where students have the option to go wherever they want and keep kosher,” she says. And if community members come to share a taste of her homeland, so much the better.