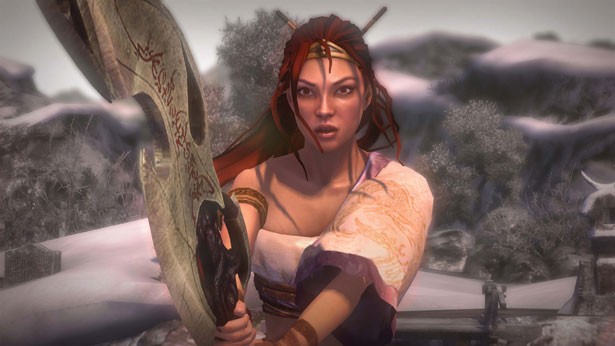 If the games on your wish list sound strangely familiar, it's probably for a good reason. The franchise remains as much a part of video games as the joystick and the Red Bull-fueled "Halo 3" all-nighter.

Sequels persist as a driver of industry success. Like other forms of software, video games tend to get better with each release, brimming with new features, bug fixes and enticements to upgrade.

Two new games show how to blend creativity with cranking out derivative products. "Heavenly Sword" and "Medal of Honor: Airborne" exemplify two ways to apply a new coat of paint, and both succeed in bringing you back to a familiar place.

Dubbed "Goddess of War" since its first public showing, for its by-the-book replication of the hit "God of War," "Heavenly Sword" has "rip-off" written all over it. While the game borrows most of its good ideas - epic drama, tortured hero and massive on-screen carnage unleashed in a fury of button presses - it also manages to add a few new bits. For one thing, the switch from a male to a female lead gives an unexpected heft to the narrative. It's easy to believe that a woman warrior has a chip on her shoulder when she's constantly being told she's not up to saving the world. Taking advantage of the PlayStation 3 hardware, the game also leaves its big brother behind in the visuals category, whether it's displaying hundreds of on-screen enemies or adding detail that makes the bad guys look cool.

"Airborne" has a tough battle in front of it. While the "Medal of Honor" series deserves a ribbon for bringing World War II action games to life in all their first-person glory, the old soldier seems like he might be ready for a rest. Not only is there a glut of WWII games that makes it hard to sort your "Call of Duty" from your "Brothers in Arms," but the entire enterprise of battling the Axis has lost some of its charm.

This time around, instead of having troops fight through a linear set of missions, "Airborne" drops them into the action feet first. This minor adjustment to the action helps breathe life into the genre and provides a short but sweet mini-game at the beginning of each battle, as you guide your paratrooper's boots onto the ground. Starting from this idea, the game pushes the notion of landing anywhere on the battlefield and finishing the fight from any number of strategic positions.

Sure, these are small updates rather than design breakthroughs. But, as the pizza-shop owner who threw ham and pineapple on a pie can tell you, sometimes you just need some extra ingredients to freshen up a classic.

Who's It For: Franchise games offer new chapters in beloved series and up-to-date versions for gamers who are new to the game.

If You Like This, Try That: It never hurts to go back and play older games in a franchise. Sometimes the old games are just inferior versions of the latest and greatest. Then again, sometimes the original still burns brightly with the fire that sparked the series in the first place.

Best Part: Buying spin-offs and franchise games rarely disappoint. You know what you are going to get, and generally you get what you pay for.