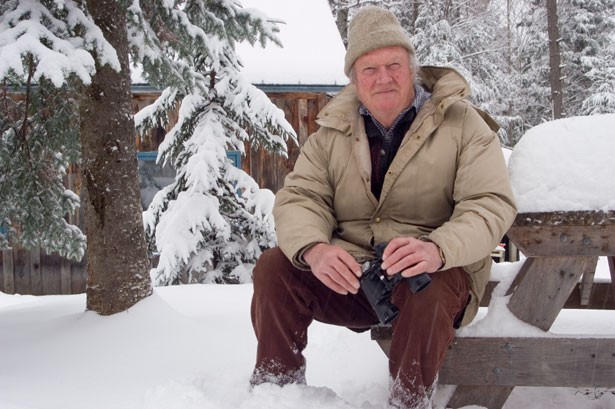 Almost 20 years ago, Ripton writer Bill McKibben's seminal book The End of Nature warned us about the devastating effects of carbon dioxide emissions on the polar North. Alas, it's taken a couple of decades - and oodles of heat-trapping CO2 - for Americans to get wise on Arctic matters.

Now, thanks largely to former Vice Prez Al Gore's documentary An Inconvenient Truth, and ominous reports from the Intergovernmental Panel on Climate Change, the North Pole has become water-cooler conversation. Seems the fabled land of Santa Claus could actually melt - Arctic sea ice has been liquefying at a rate of about 3 percent per decade since the late 1970s. Back in January, Vermont Senator Bernie Sanders introduced the landmark Global Warming Pollution Reduction Act of 2007, which aims to decrease U.S. carbon emissions 80 percent by 2050. And from December 3 to 14, world leaders are gathering in Bali to hammer out a new international plan for global CO2 action.

For polar pros at the Center for Northern Studies (CNS) in Wolcott, however, all that is just the tip of the proverbial iceberg. Now fully incorporated with nearby Sterling College, the center has offered courses on topics ranging from polar folklore to geology since 1971. Soft-spoken Steve Young says its "trans-disciplinary" approach is designed to give students a holistic understanding of the region - parts of Alaska, Canada, Russia, Japan, Greenland and Scandinavia fraught with tensions over land ownership, aboriginal rights and economic development - both as a landscape and a dwelling place.

Young, 69, is a botanist and self-described "environmental historian" with wispy gray hair and a wry wit. A Connecticut native who lived in Vermont as a kid, he studied at the University of Alaska, Harvard and Ohio State before settling in Wolcott. "I was interested in . . . giving people broad training in polar regions," he says on a recent morning at the center. "And I didn't want to be in Ohio, so I decided to come back here."

Visit this wood-frame building, which sits a mile or two from Wolcott village, and it's easy to see why. Young says the snow-covered evergreens outside could be right out of a northern boreal forest. Upstairs, a cozy library houses stacks of crusty scientific journals. The conference room crawls with survey maps and stuffed birds. With his flushed features and raggedy red sweater, Young seems like a cross between Santa Claus and the late French explorer Jacques Cousteau.

Climate indicators have grown more alarming since 1971, but the mission of the Center for Northern Studies hasn't wavered. That doesn't imply stagnation - if anything, the program has evolved. CNS grads land good jobs in education, government and advocacy sectors, Young says. "We're still teaching many of the same things, but a course that we taught 30 years ago is now very different, because the world has changed," he explains. "In that sense, we're not living in the past."

Still, he hasn't had an easy time keeping CNS alive over the years through its many transitions. At first, funding flowed from National Park Service contracts, then that dried up. In 1977, Young notes, the center partnered with Middlebury College's now-defunct Northern Studies major. That lasted until Middlebury's administrative interest in the center began to "fade" in the early 1990s, he says.

Fast-forward to 2003: That's when Sterling College came on board as the center's administrative sugar daddy. Last year, the 35-year-old Northern Studies major morphed into "Circumpolar Studies." Now enrolling six students, the program is one of four courses of study that lead to B.A. degrees at the 105-student private college, along with Conservation Ecology, Outdoor Education & Leadership and Sustainable Agriculture. Sterling scholars also travel to Labrador, Newfoundland and Lapland. "Now, we have much more variability within the group of students who take courses here," Young reflects. "And that's healthy."

"Uh-oh," he reminds himself, rising abruptly. "I have to go." Young's class on "Quaternary Studies" - that is, the natural and social history of the last 1.6 million years - starts in less than a half hour on Sterling's main campus in Craftsbury Common. That's a 20-minute drive, assuming good road conditions.

By 10:45, Young is sitting in a basement classroom before a dozen eager students. "I put a lot of things up on the board," he begins with a sly smile, "but they probably won't make any sense unless I explain 'em to you." His lecture explores the post-ice age, and why it - like climate change - is more complex than some intellectuals assume.

Compared with the typically preppy-looking students from Middlebury - a.k.a., "Club Midd" - attendees of Young's class seem a bit edgier. One guy, for instance, wears camouflage pants; another has a vintage microphone tattooed on his neck. While Young lectures, a young woman with a nose ring crochets a sweater and sips tea from a canning jar.

Young says students aren't as "activist" as they used to be. But according to his longtime buddy Dick Smyth, Sterling scholars have plenty going for them - and they embody different values from their Middlebury counterparts. Sitting in the back row of the classroom for a post-lecture interview, Smyth suggests that Sterling students span a healthy range of ages and income levels. "When I first came here, I pictured students coming here with chainsaws," he says, referring to Sterling's work-study requirement. "I was very, very wrong about that."

Smyth, a bearded, 76-year-old jack-of-all-trades who lives in a primitive "shack" near the center, would know: He directed the Center for Northern Studies briefly in 1980, back when it was still associated with Middlebury. Come winter, he usually teaches a Wolcott-based winter ecology course. Today, though, he's here as an observer. "These are some of the best young naturalists I've ever encountered," he gushes. "Just to hang out with them and eat lunch is delightful."

For 21-year-old Tony Dalisio, that feeling is mutual. Hanging in the dining hall after class, he can't stop singing Young's and Smyth's praises - even while scarfing a ham sandwich. Dalisio, a senior from Michigan with thin features and a ponytail, is counting Young's "Quaternary Studies" section toward a requirement for his Circumpolar Studies major. "You clearly understand that Steve and Dick hold a lot of knowledge," he says, calling the center an "unknown gem." With the men's accrued wisdom and the center's location, Dalisio adds, "[Circumpolar] Studies seemed like a logical choice." He plans to study avian ecology in graduate school next year.

In this student's view, the circumpolar curriculum gives Sterling students a leg up when it comes to a hot topic like global warming. "Right now, climate change is so big in the media," Dalisio reflects. But, he adds, "Steve says, 'Let's take it one step at a time, 'cause that's how the world is.'" (Young, though he grimly asserts that global warming is "spectacularly obvious," worries that other critical issues - such as population - will get submerged in the climate hype.)

"When I hear [climate change] brought up, it makes me lucky to not be part of this back-and-forth about whether climate change is happening," Dalisio continues. "I can think about it in a more constructive way - the uniqueness of our program is that it can produce a constructive line of thinkers."

Intellectual bravado notwithstanding, this student wouldn't mind a little recognition from Vermonters. "If I'm in Burlington and I tell someone I go to Sterling, they don't know it exists, let alone the Center for Northern Studies," Dalisio laments, polishing off his sandwich. "But it's a beautiful place surrounded by an outdoor classroom. Dick and Steve provide wisdom that you just can't get in a lot of places."