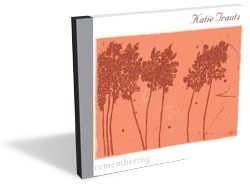 Cabot-based multi-instrumentalist Katie Trautz is one of the state’s busiest and most creative young folk musicians. She is the director of the Summit School of Traditional Music and Culture in Montpelier, a training ground for aspiring acoustic musicians that features a top-notch teaching staff including some of Vermont’s best acoustic musicians. In 2009 Trautz released a fine vocal-based CD as one-half of Mayfly, her duo project with longtime musical partner Julia Wayne. And she performs in other musical configurations too numerous to mention here. Now, she adds to that impressive résumé with a new solo album, Remembering.

Before we say any more about the musical marvels of Katie Trautz, I’d like to offer a few reverent words about Marshfield’s Larry Gordon, who, in his own quiet way, helped Katie get her start. Gordon has been working nonstop for nearly 40 years in central Vermont, building community choirs that are passionate about shape-note, Balkan and sacred-harp singing. Gordon has created a musical environment that inspires young Vermont singers. Some of the fruits and spin-offs of his labor include Village Harmony, the Onion River Chorus, Northern Harmony, the Word of Mouth Chorus and Social Band. A few of the many Vermont musicians who have been inspired by his efforts and have gone on to enrich Vermont’s musical community are Suzannah Park, Peter Amidon, Moira Smiley, Katie Shimizu, Amity Baker and, of course, Katie Trautz. Which brings us back to the business at hand.

On her new solo recording, Trautz does her mentor proud and really shines as a vocalist, instrumentalist and songwriter. Her fiddling is full of old-timey swing, her five-string banjo playing leisurely, and her alto voice confident and full of emotion.

One of my favorites here is a reimagining of the Ginny Hawker pioneer classic “Going to the West,” which features a steady rhythm that takes you loping down the trail. Whether it’s an original song, a traditional shape-note hymn or an old-time instrumental, the selections on this CD mesh into a comfortable and unified whole.

Impeccable recording, mixing and mastering on the disc come courtesy of studio ace McCaffrey. And, as we’ve come to expect, the sound throughout is crisp and clean — in other words, just right for the style.