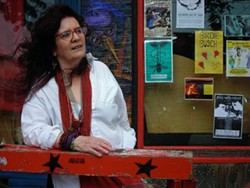 “...it is like going into a room with a thousand skeins of yarn in a thousand wonderful colors and being asked to knit an afghan....” —Kathleen De Simone, on deciding which stories to tell about her dear uncle Freddy

Mary Kathleen Teresa Bernadette O’Boyle Henry, known to us as Kathleen De Simone, died in her Burlington home of 36 years on October 12, 2015, just as the leaves were at their most glorious. A familiar sight in the village, a glamorous woman who lately brandished a rose-tipped staff, Kathleen will be missed by scores of cabaret girls, generations of children, and anyone with an eye for textiles and star quality, a nose for roses, and an ear for fiercely lyrical sass. She was an artist who worked with fabric, poet, animator, graphic designer, muralist, journal keeper, dreamer extraordinaire, art teacher, art store manager, storyteller, friend, flaneur, fashionista and inspiration to all who knew her. Although she sometimes seemed to come from faerie land, she was born in Bayshore, Long Island to John O’Boyle Henry of Ireland and Eileen Ann White of Bay Shore in the days before rock and roll, and boarded for many years with the Cooper family, while her divorced mother worked at Pilgrim State Hospital. At the knee of grandma “Ma” Cooper, she learned to sew by the age of 5, and to tell stories. Dear “uncle” Freddy encouraged her fascination with everything from how to make rocket fuel to how the Navajos wove a rug. She cared for a gaggle of “brothers” and “sisters” who were related, but not by blood. There was a magic tree in the backyard that spoke to Kathleen when “Ma” Cooper tied our wandering gypsy to it. In the 1960s Kathleen followed the flower child pilgrimage to the west coast and ended up in Los Angeles and later Santa Barbara, contributing to the bohemian art scene with her bright spirit and elaborate creations. In her travels, Kathleen met many other artists and dreamers, mountain men with holy eyes and strong ladies of faerie, carrying feathers, bags of magic Persian fabric, bundles of wild mint, yarrow stalks, wooden flutes, medicine pouches, blue tissue paper with silver stars; wearing silver moon rings, embroidered dresses, Indian bells, dandelion chains. She rode in blue VW buses, hitched rides, crashed at the homes of “good people”; drank moon tea in special china cups, stayed up all night or slept in fields of poppies and pansies, under elves’ trees, with a witch’s cat at her feet, “not unlike in Rivendell” as her journal says; her two daughters, Marisa and Giannina, were always in her heart wherever she roamed; and always there was Jimmie Klein, her true love, somewhere near or far. She moved to Vermont in the mid-1970s and helped to animate the film, Black Dawn, with Robin Lloyd and Doreen Kraft, and worked as a freelance graphic designer and fabric artist. She studied poetry in the ’80s at Burlington College. In the late ’90s Kathleen began to make magical hats for the Fools’ Gold Art Auction. Over the course of the next 15 years, she made over 35 millinery masterpieces and was awarded in 2013 the Fools’ Gold Award for Creative Community Spirit. Beginning in 2002, utilizing her broad knowledge of fashion history, Kathleen became the costumier for the Spielpalast Cabaret, for which she designed a vast and astonishingly ambitious body of work. She always made, appreciated and wore beautiful things; she danced, painted murals, did stage and lighting design for bands and theater productions, wrote poems, always offered a wise and compassionate ear, and received countless children to her apartment for tea, popcorn, confessions and art-making dates. She lit candles for us and “surrounded us with white light.” There were thousands of kisses. She is survived by her daughters, Marisa and Giannina, her granddaughter, Pepper Campbell, her “sisters” Diana Stoiber Anderson and Julia Stoiber Thompson, and many loving friends who will strive to live up to her gloriousness, her poetic vision, her love of beauty and her creative spirit. Kathleen's service will be from 6 to 9 pm on Sunday, November 8, beginning with a two-hour program at North End Studios (A), followed by a procession down North Winooski Avenue and ending in a tea ceremony at Swan Dojo, at 19 Church St. Donations to help cover burial costs are gratefully accepted and may be mailed to 57 N. Winooski Ave., No. 3, Burlington, VT 05401.