Katherine Leung Talks About Her 'Canto Cutie' Zine, Which Celebrates the Cantonese Diaspora 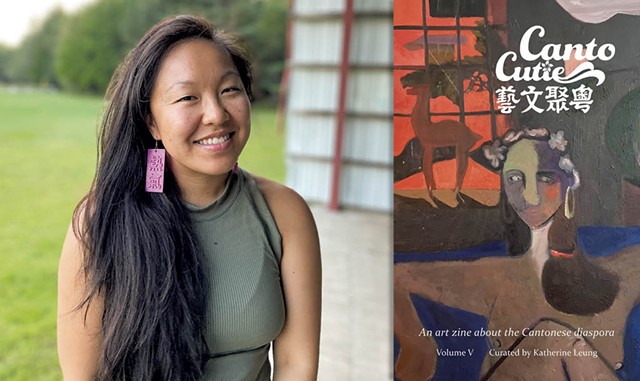 While walking among the Bookstock festival exhibitors lining the Woodstock green in June, I had an epiphany: The most vibrant literary magazine published in Vermont today is a bilingual, international art zine about the Cantonese diaspora. It's called Canto Cutie.

Founded in 2020 by Katherine Leung of Milton, the glossy, full-color, full-bleed publication boasts an event schedule more active than those of all the other lit journals in the state combined. All summer, visual artist and writer Leung has been tabling near and far, from Winooski Wednesdays to the Vermont Womenpreneurs Summit, and she'll be at upcoming book fairs in Boston and Los Angeles.

This is no hastily photocopied pamphlet. Canto Cutie, now in its fifth volume, brings together writers and artists from around the world in lushly designed spreads of poems, paintings, illustrations, photographs and interviews.

I opened my copy of Volume IV to these searingly good lines in "Birthmark," a poem by Claudia Yang: "to this day i / revert language of / post-colonial desire / where every glistening / freighter monsoons its threshold to / quench my pearls / daring to ask / of its origins."

Even the contributors' biographical notes are refreshing. Púca, a "multidisciplinary artist and hand-poking tattooer," writes that she's a permanent resident at the Françoise Tattoo parlor in Lisbon, Portugal.

I caught up with Leung by the Milton Public Library, where we talked about the zine's creation, the Cantonese diaspora and the layers of meaning dangling in her yeet hay earrings.

"I wanted to remix the typical notions of how these publications work." Katherine Leung tweet this

SEVEN DAYS: Have you been building this publication up as you go, or has it been a full-court press from the beginning?

KATHERINE LEUNG: It's been cooking for a long time. I have a background in university presses and working as a teacher — and as a writer and artist myself, submitting to journals, hoping to get published. Those experiences made me want to start my own magazine, the way I would want to run it. The niche that we fill is for the Cantonese diaspora, which is what I identify as and what I felt there should be a publication to celebrate.

SD: I'm impressed by Canto Cutie's broad international scope. How do you connect with contributors?

KL: Mostly from submission calls. Our marketing is through Instagram, so over time I've relied on social media to get connected to artists and build relationships.

My own background is very international. I grew up in the U.S., and that's what I know. But, because of the Cantonese diaspora, I have family in Brazil, Singapore, Taiwan. I've always known that we're everywhere, not just in Hong Kong. I feel affinity with everyone who is Cantonese. We have a lot in common.

SD: I noticed that some of the artists' bios reference other publications, such as — I don't want to mispronounce it...

KL: [Laughing] Oh, yeah! That's Zou Mat Je, a zine that popped up about a year after I started mine. There are a wide range of zines on every topic, especially identity and culture. Everyone loves to make little books, especially in the DIY and music scene. When I started out, I'd seen an Indonesian diaspora zine. While their diaspora is so different, I just loved reading it. And then I met someone Indigenous, from what's now known as the Louisiana area, and they have a zine about that.

SD: Do you mean Bulbancha Is Still a Place?

SD: Its front cover has a photograph of the statue of Andrew Jackson with his head severed, right?

KL: Oh, yeah. I'd met one of the editors at the San Francisco Zine Fest and was like, "This is the coolest thing." Same with the Indonesian zine Buah. But the Cantonese diaspora gets overshadowed by the Chinese diaspora. Cantonese is a minority language in China. There's over 40 different languages there. So, I think this might have not been a topic that people would make a zine of, because there's bigger, more dominant identities [such as] Chinese, Chinese American, Asian American.

SD: Canto Cutie is a perfect-bound publication with a pastiche of many things — lists, dreams, recipes. Calling it a zine feels like a conscious decision. If it keeps growing, might you switch to calling it a magazine?

KL: A zine is an independent publication, and that's what this is. I fund it myself; I print it myself. It's just me on my computer. I don't want it to be as pretentious as a literary art magazine, where there's always some kind of drama, some toxic editor who lords over everything. This is collaborative, which I think zines really get to the point of.

Also, I wanted to remix the typical notions of how these publications work. Artists shouldn't have to sell their souls to be in something. There's no submission fee; I have a free version of every issue [online] that anyone can read. I try to translate as much as I can to make it accessible.

SD: Your insistence on the multilingualness, including different alphabets, translations — I wish more literary magazines were hip to that.

KL: Well, most of our translations are interviews. I know what you're saying, because I love reading bilingual poetry when it's side by side, but we don't have that.

SD: Do you find it frustrating to live in one of the whitest states, or do you see Vermont as a headquarters of sorts for sending this zine around the world — or how do you think about it?

KL: Hmm, that's a good question. I've lived in many places where there's a big Cantonese diaspora, like the Bay Area. San Francisco's Chinatown was founded by Cantonese immigrants; that's a huge center. But I've also lived in Tucson. I'm still Cantonese; I still want to do this work.

I also think about one of my favorite writers, Alexander Solzhenitsyn. He decided to live here, I think in Cavendish? A beautiful refuge. You need that as a creative, as well. I know I'm very privileged to be here.

Is this a headquarters for, like, Cantonese culture going forward? I don't think so! But in the face of the political climate in Hong Kong, and also worldwide right now, I feel very safe and happy making art here. To look out and see trees, snow.

Hong Kong is facing a mass exodus of thinkers, writers, professors, artists. Journalists, especially. The one-country-two-systems policy isn't working anymore, since the British handed back control. Hong Kong has always been on rocky waters, politically. Then, in 2020, there was a resurgence of unrest and crackdowns. Much of the concern right now is that the rule of law is shifting to the Chinese system, when it had been very safely in the British system for a long time: a cool, cosmopolitan place for people of different identities to live. But that's changing; a lot of people are leaving. So, to know that my diaspora is going through that, yeah. I do feel lucky to be in Vermont.

SD: I really enjoy how Canto Cutie insists on maintaining that perspective, as opposed to courting the white Vermont gaze. I never feel like Canto Cutie is catering to me.

KL: I feel like, if a Vermonter picks up this zine and asks themselves a real question, the zine is doing the job of educating — if it invites someone to research more, learn more, read foreign news. For example, I provide the social media handles and websites for our contributors. If readers buy their art, read more of their poems, then I think that's the biggest win. That's the ultimate goal.

SD: Speaking of learning more: What do your earrings say?

KL: They're by an artist from Volume I, Brenda Chi. They say "yeet hay," which means "hot air." It's an Eastern medicine custom that exists only, as near as I can tell, in southern China and within the Cantonese diaspora — the belief that there's a fire inside you at all times. The food that you consume can be categorized as cool air, which is good for your health, or hot air, which stokes the fire even more. When you eat food that's not good for you, like fried food, your body will feel it as pain, getting sick, sore throat. It's something that's very serious to Cantonese parents — and also a joke between the diaspora, because pretty much all Western food is yeet hay. It's funny: "Don't eat that; it's yeet hay." It's also funny because when you hang out with your friends or drink alcohol — everything fun is yeet hay.

The original print version of this article was headlined "Yeet Hay"