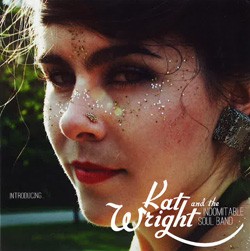 If you are even peripherally in tune with the local music scene, the story of Kat Wright & the Indomitable Soul Band should be familiar by now. But for those in need of a refresher, here’s the CliffsNotes version. A couple years back, Wright — formerly one-half of the excellent folk duo the Loveful Heights — started palling around with some local jazz and funk players, hammering out renditions of classic soul and R&B tunes every Thursday at Burlington’s Radio Bean. In time, those wildly popular informal “soul sessions” solidified into a serious band, which took its act on the road. As the group’s reputation for dynamic live shows grew, it began inserting original material alongside crowd-pleasing covers from the likes of Aretha Franklin and Jackie Wilson. Now regarded as rising stars both in Vermont and beyond, Kat Wright & the Indomitable Soul Band have released their debut EP, a six-song teaser of original soul music appropriately titled Introducing…

As anyone who has seen the band live can attest, KW&ISB would seem well suited for the “retro-soul” tag affixed to the vintage stylings of artists such as Sharon Jones, early Mayer Hawthorne and the late Amy Winehouse. Indeed, the album’s opening cut, “All About You,” not only affirms but embraces that notion with smoky horns and a backbone-slipping groove lifted straight from the Daptone Records playbook. It is currently the band’s signature song and would-be hit single. And why not? It introduces Kat Wright as both a powerhouse capable of full-throated howling and a sensuous chanteuse who can purr like a kitten.

The equally excellent “Afterall (Glad We Made It)” continues that throwback vibe. But to dismiss Wright and Co. as just another hip rehash of Berry Gordy and Motown circa 1964 is shortsighted. Like the best of the modern retro-soul acolytes — Jones, Raphael Saadiq, Ryan Shaw, etc. — Wright and her band individualize each of their well-traveled reference points, using stylistic touchstones as templates for experimentation rather than as rigid structures.

Take “Hustle,” for example. The song owes more to the psychedelic soul sounds of Sly and the Family Stone than to Smokey Robinson. And it features a guest appearance from local rapper Konflik, whose mellow flow and socially charged lyrics give the song an added depth and gravitas — and evoke Ghostface Killah’s appearance on an alternate version of Amy Winehouse’s “You Know I’m No Good.”

“Ain’t No Tellin’” is a coolly funky cut that nods at the later work of legendary soul songwriters Barrett Strong and Norman Whitfield — think the Temptations’ 1972 hit “Papa Was a Rollin’ Stone.” But there’s playfulness amid its stormy groove that is light and slippery.

Album closer “You’ll Be the Sky” is a crushingly tender ballad that is perhaps the EP’s most straightforward song. On earlier cuts the Indomitable Soul Band are often as much the focus as Wright — and deservedly so — but here they lay back and give the singer room to stretch out. The result — not just of the song but the album — may signal the birth of a certified local diva, one who not only takes cues from the past but is clearly attuned to the present.

Introducing… by Kat Wright & the Indomitable Soul Band is available at katwrightsoulband.com. The band plays a CD release party at ArtsRiot in Burlington this Friday, October 11.