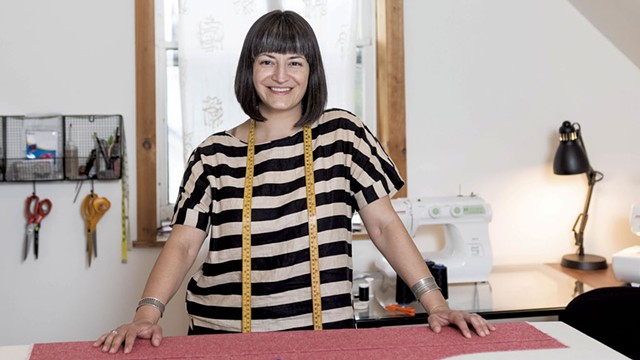 Making clothes specific to individual bodies, particularly female bodies, verges on a lost art. A wedding dress might be the only "fitted" item some women ever own, and most never experience the kind of tailoring that goes into, say, a man's formal suit. Kat Whitledge aims to change that, one body at a time.

The HQ of Kat Whitledge Basics & Bespoke is a third-floor studio in a Winooski rental. (Like many thirtysomething couples in Vermont, Whitledge and her partner are seeking a house.) The pleasantly busy atelier — filled with fabrics, neat stacks of finished pieces, a rack of in-process outfits, a sewing machine and a worktable — gives clients a glimpse of Whitledge's realm of possibilities.

On Friday, April 30, and Saturday, May 1, the public can get a look at KWBB creations at a pop-up at Soapbox Arts in Burlington. Visitors may recognize gallerist Patricia Trafton as a model on the KWBB website; the two women met a couple of years ago and became friends, Whitledge said. Trafton's partner, Burlington commercial photographer Homer Horowitz, was enlisted to do KWBB's fashion shoots.

The pop-up show will feature samples of one-of-a-kind clothing but lean more heavily on the "basics" side, including aprons in a couple of styles, sturdy "Vermont chic" gardening gear and cloth bags. The approach of Mother's Day inspired the timing of the event.

As a tailor, Whitledge naturally champions "slow fashion," described in part on her website as "a real consideration of what we wear and how it is made." Consistent with that sustainability ethos, she uses fabrics such as cotton, linen, Tencel and silk.

Her timeless designs have "long, clean lines with a touch of something unique," Whitledge said. "I don't get super flashy; if someone wants frills and sequins, I'll send them to a different designer."

She works with clients to manifest their own visions, and she has remade "beloved items for people because they're worn out." But, she clarified, "I don't do alterations."

Whitledge's path has hardly been a straight line; she grew up in Arkansas, Vermont and Egypt, the last her stepfather's home country. Her forays among continents and cultures included obtaining an undergraduate degree in painting and sculpture at Bennington College and a master's of education at Ohio's Antioch College. She taught for four years at an American elementary school in Cairo, until the Arab Spring uprisings began to roil the city.

Whitledge returned to Vermont in 2012. She initially worked in a lifestyle boutique in Brattleboro, where "I would notice people coming out of the dressing room frustrated, not finding the right fit," she recalled. She thought, I know how to sew and began to contemplate making garments herself.

As her family planned another trip to Cairo, Whitledge decided to take a chance and inquire about apprenticing with Egyptian fashion designer Sylva Nasrallah of Nagada Egypte. "I was really drawn to her clothing because lots of different-sized women can find something that fits well," she said.

Nasrallah accepted her, and Whitledge worked directly with the designer for three months. "[Nasrallah] taught me everything by hand," she said. "You don't get that kind of opportunity in the U.S."

Back in Brattleboro again, Whitledge opened her own design studio. But after moving to Winooski in 2018 — to be near other family members — she found that "the back-and-forth just wasn't working," so she closed her southern Vermont quarters. 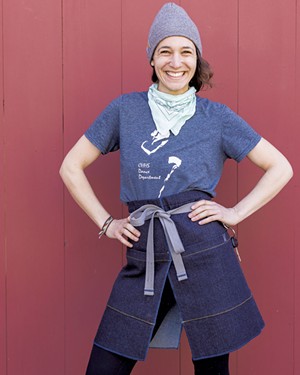 As everything shifted during the pandemic, Whitledge said, "I wanted to add to the bespoke aspect" of the business. Her dream is to grow KWBB to the point where she can train someone else to handle the "basics" aspect. Making one-of-a-kind apparel is clearly her personal passion.

"Tomorrow I'm meeting with a [bride] who wants a jacket with a way to tie flowers into the back," Whitledge enthused. "And I'm making my first $1,000 suit for a client in New York."

Sydney Kalas is one of her satisfied local clients. By "asking around," the 29-year-old found Whitledge, whom she asked to create an elopement ceremony dress.

"Kat seemed to have a vision that most matched my personal aesthetic (not frilly, basic and chic, well executed)," Kalas wrote in an email. "I sent her a photo of a dress I liked as a base idea. Together, we chose a white fabric/embroidery pattern for the outer layer and she chose a very soft and cozy white bamboo fabric for the base layer.

"The dress is knee length with short sleeves," Kalas continued. "The best part is that at the bottom, she sewed in little beads from the earrings that my mom wore for her own elopement-style wedding. The dress is so, so special and personal, and Kat seemed to really care about ensuring that it's special."

Whitledge also cares about allaying women's anxiety and confusion regarding size. The numbering systems used by different off-the-rack clothing manufacturers are inconsistent — never mind the hazy parameters of small, medium and large — and accommodate only "standard" proportions. At KWBB, measurements are specific to the client.

"I work in centimeters," Whitledge said with a grin. "It's how I learned, but it's a good psychological trick, because people don't know what 'size' they are in centimeters!

"People have cried walking out of here with clothing that really fits their body," she added.

Whitledge intends for KWBB to become more "social" this year, she said, which includes having a presence at the summer Winooski Farmers Market. Eventually, she'd like to be a "traveling tailor" around the state. "I could visit friends, spend a weekend, do some measurements, come back, make some clothes," she mused. But first, Whitledge said, "I consider the pop-up to be my launch."

For her part, Trafton said she loves the idea of using her gallery as a resource "for other businesses who may not have the space." And, yes, she's got her own outfit on order from KWBB — "an olive-green balloon-sleeve wrap top with a Tencel A-line skirt," she said. "It's a curator's dream collection of clothing."

The original print version of this article was headlined "Good Fit"