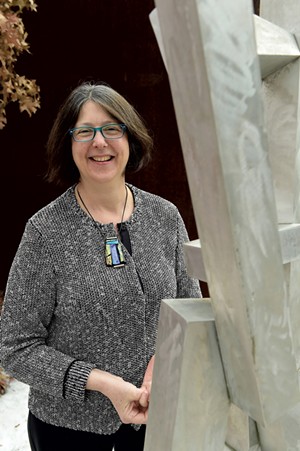 Last summer, the Vermont Arts Council announced that Karen Mittelman would replace Alex Aldrich as executive director. Most recently the director of the Division of Public Programs at the National Endowment for the Humanities, Mittelman brings to her new job nearly three decades of experience at federal institutions and other cultural posts. The New York native has lived in the Washington, D.C., area most of her life. But, in October of last year, the 59-year-old traded the nation's capital for Vermont's.

Besides adjusting to a less urban milieu, she's dealing with the weather. In an interview at her Montpelier office last week, Mittelman related that she had a bit of a scare recently: She found herself without GPS while driving home from Newport in a snowstorm. "It's been a long time since I've been that disoriented," she admitted.

The incident spurred Mittelman to buy a blanket and emergency safety kit for her car, because she wasn't about to hole up indoors. Getting oriented has been integral to her first few months at the VAC. Since she arrived, Mittelman has been traveling around, getting to know the state and its artists.

Seven Days met with the new director to get to know her, and her vision for the arts council's future.

SEVEN DAYS: What prompted your transition to this job?

KAREN MITTELMAN: I wasn't on the job market when I found this job. I had spent 19 years in the [NEH], and I figured I was going to stay another year; after 20 years I would look for another gig. But I knew that when I left the NEH, I wanted to leave the federal, national level and go back to either the local or regional level. I feel like that's where you can make a much more profound difference, especially when it comes to arts and humanities. And I knew I always wanted to end up in Vermont.

KM: I've been skiing in Vermont since I was 5 or 6 years old. I would come here for writing retreats in the summer. I just love it. I had a moment when I was 11 or 12 on top of a mountain with my dad; I was looking at the mountains and remember saying to him, "I'm going to live in Vermont someday."

Once I got to my late fifties, I was like, It's not going to happen, because no jobs had opened up, and it's late in life to make a big change. So I thought, I'll just vacation there. Until my friend sent me this announcement [about the VAC job]. Once I came, I was complete lured in by the incredible things the arts council does, and by the fact that they wanted the new director to come in and help the staff reenvision the organization. That's what I love to do. I think that's one of my strengths.

SD: So they wanted to look at the way things are operating and make changes?

KM: After 19 to 20 years with one director, I think the board knew you're going to bring someone new in, and it's time to take stock of where the organization is and where it might go in the future. I hope my staff at NEH is doing that. That's what you should do when leadership changes: Look at it with new eyes and say, "OK, where do we want to go?"

SD: And where do you want to go?

KM: We're in the midst of mapping out two new program priorities. One of them is about access to arts and cultural experiences. It's at the heart of the strategic plan I inherited, that everyone in Vermont [should] have access to arts and creativity in their life, education and community. Which is kind of a tall order, so we're trying to figure out what that really does mean.

When I think of access and equity and inclusion in Vermont, it means a lot of different things. Who stands in the doorway of a museum or theater company or pottery studio and doesn't go in because they think, That place is just not for me? What are the barriers?

I can't tell you what we'll be doing six months from now, but the staff and the board have made an absolute commitment that access, equity and inclusion are a priority.

The second priority is creative place making. There was for many years a grant called Animating Infrastructure, and we're going to revive that and expand it. Creative place making is about connecting people in meaningful ways to the places they live and work through art.

SD: How involved are you in the grant process?

KM: We have a peer-review process, and we send everything to outside review panels. They make their recommendations, and the board and the staff ratify those. We trust the external review. I think it's a good thing. I think the integrity of that process is what makes people trust that, when the arts council makes a grant, experts in the field have reviewed it, the review was thoughtful, [and] it's fair.

SD: Sometimes individual artists have felt left out by that process, though.

KM: I know. One of the struggles is that we don't have enough money to go around. I think we made 11 creation grants to individual artists [last year], and there are so many more artists that deserve funding from the arts council. So, one of my missions is to bring in some private funding to expand the number of grants we can make.

SD: At a panel discussion hosted by Champlain College's master's program for emergent media, you discussed your work with digital technologies at the NEH. Will you incorporate that into your mission here?

KM: At the NEH, I launched the first digital public humanities grant program ... We were focused on digital experiences that would benefit members of the public — digital tours, virtual field trips, digital audio tours. We funded some amazing games, like the Walden game that's going to be distributed in classrooms across America pretty soon.

I would love to see the arts council embrace digital arts as a part of our portfolio. This is a really interesting moment, because [Vermont Humanities Council director] Peter Gilbert has announced that he's stepping down. Depending on who the new leadership is over there, I would hope to collaborate with them and see what the two councils can do together to encourage digital media.

SD: In terms of past projects, do any make you think, This is what the arts council needs to be doing?

KM: I hate to single out [one project]. I think that some of the community arts centers that are doing work with at-risk kids ... this is a place where art can transform the life of an individual. Art can always be transformative, but when you're talking about a kid that's at risk, on the edge of being lost to drugs or violence or God knows what, and you see that art really changes that person's life — every time I see that happening, I think, This is why I'm here. This is why I'm in the arts.