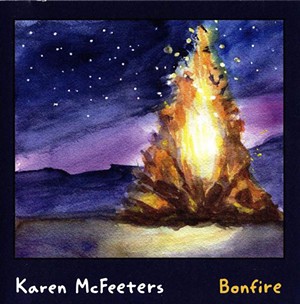 There's something to be said for doing things the old-fashioned way. Though it's more common in 2021 for local artists to send along their work digitally, Seven Days still gets a fair number of physical CD submissions. And sometimes these are accompanied by a handwritten greeting card with an adorable art print on the front, such as the one Karen McFeeters sent along with her latest album, Bonfire.

Though Milton singer-songwriter also sent her album digitally, I nevertheless found myself peeling open the shrink-wrapped jewel case and popping the disc into my portable CD player like it was 1997. It was a tactile experience I hadn't thought much about in years. But there's nothing quite like the act of pressing down on the spring-loaded center-hole grip to release a disc from its case and hearing the electronic whir of a CD player as it reaches playback speed.

Bonfire, with its sturdy assemblage of Colin McCaffrey-produced pop-folk songs, is bound to evoke all manner of nostalgic memories. After a year of being starved for human contact and social normalcy, I found that the album's opening title track hit home. "I'm happy you joined me on this autumn night," McFeeters sings, her face presumably awash in an orange glow. It's a simple campfire song, a warm invitation.

McFeeters' first album in 12 years is sparkling and refined. During her respite from recording, she helmed the Aphasia Choir of Vermont, which brought together in song people who have verbal challenges as a result of strokes or other brain injuries. If McFeeters had to dust off any cobwebs when returning to the studio, she did it without anyone being the wiser.

McFeeters projects strength and wisdom through crisp, clear vocals. Her writing zeroes in on the fact that being with other people isn't always easy. But the empathetic way she approaches conflict implies that it's better to be with others than to be alone.

McCaffrey plays almost every instrument heard on the album. But McFeeters tickles the ivories on the low-key piano ballad "I'm Not Wonder Woman," in which she plainly states that power is derived from within, not without.

Country waltz "History" employs McCaffrey's wistfully elegant violin. McFeeters rectifies past mistakes when she sings, "We are beginning to feel / the present is real / the rest is history."

Bonfire's liner notes are dotted with intimate personal photos, reinforcing the communal vibes that McFeeters instills in her work. Whether amid changing seasons or, hopefully, the end of the pandemic, the album arrives at the perfect time.

Bonfire is available at karenmcfeeters.com.