Kaifa Dennis Sought Info About a Notable Ancestor in Rutland. He Found a New Home 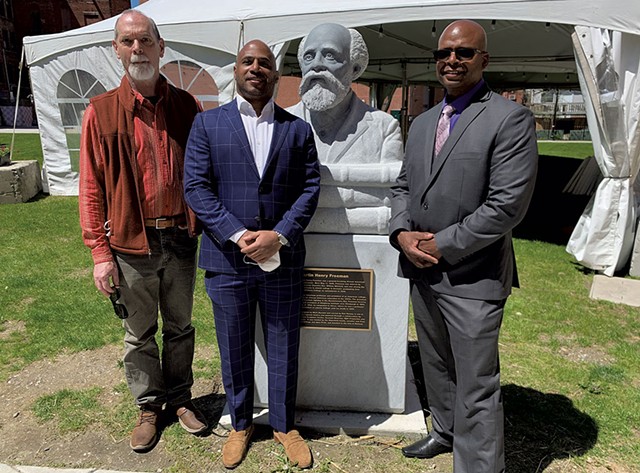 Last December, community organizers in Rutland were searching for descendants of Martin Henry Freeman, a city native who in the 19th century became the first Black college president in the United States. The city was dedicating a sculpture of Freeman as part of a project that honors distinguished locals.

Around the same time, and 500 miles to the south, Kaifa Dennis had set out to learn more about Freeman, his great-great-great-grandfather. Freeman had moved to Liberia, an African nation established by freed former slaves, in the mid-1800s. Dennis was born in Liberia before immigrating first to England and then to the U.S. when he was still a child.

Dennis, who lives in the Washington, D.C., area, discovered the Rutland project online. Eight months later, after getting to know many of the people working on it, he's moving to Rutland to take a job with a medical device company, closing a circle that opened in 1826, when Freeman was born in the city.

Dennis got in touch with organizers last winter, but "I figured they're not going to believe me," he said. He connected with Steve Costello, the vice president of customer care for Green Mountain Power, one of a handful of companies sponsoring the Rutland Sculpture Trail.

"I was excited, and provided them all the information I had about our family tree, and told them our story of how we came from Liberia and ended up here," Dennis said. "Really, it was divine providence."

Freeman was raised by his grandfather, Pearson Freeman, a business owner and former slave who had won his freedom by serving as a soldier in the Revolutionary War. Martin Henry Freeman attended Middlebury College and graduated as salutatorian in 1849.

His history is detailed on a section of the college's website dedicated to the intercultural Anderson Freeman Resource Center, which opened in 2015 and was named to honor him and another Black alumnus, Mary Annette Anderson. She was a Shoreham native who taught at Howard University in Washington, D.C., in the early 1900s.

Freeman went on to become president of the Allegheny Institute and Mission Church — later called Avery College — in Pittsburgh before traveling to Liberia, then a newly established nation on the western coast of Africa.

"Like many students and faculty on campus, Freeman was a strong advocate of black Americans' relocation to Africa," reads his history on Middlebury College's website, "arguing that African-American children would benefit from learning in an environment free from racial hierarchy."

He was a natural pick when work on the Rutland Sculpture Trail started in 2017. From the start, the purpose was to beautify downtown Rutland, attract visitors and stir community pride by drawing attention to historical figures known and unknown, Costello said.

"Everyone talks about Vermont being the whitest state in the country, and it probably is," Costello said. "But Rutland County has some fascinating African American history, and I've never heard it discussed previous to the sculpture trail."

Another monument on the trail is dedicated to the 20 local men who served in the first Black regiment to fight in the Civil War. The trail also pays homage to notable women, including Andrea Mead Lawrence, an Olympic skier and leading environmentalist. In September, the city will dedicate a sculpture of 19th-century writer Julia Dorr, a leading philanthropist who established the Rutland Free Library.

The Freeman statue, the eighth on the sculpture trail, was designed by Black artist Mark Burnett of Leominster, Mass., and created from Danby marble by Rutland-area sculptor Don Ramey. It was dedicated in downtown Rutland's Center Street Marketplace Park on May 13.

Creating the sculpture trail has given participants a glimpse of previously unknown Rutland history, Costello said.

"If you had asked 100 people in Rutland who Martin Freeman is six months ago, I bet you wouldn't have found two who knew the answer," said Costello. "With Freeman in particular, we thought this is fascinating history people should be aware of — especially in light of the history of the last few years in this country."

Freeman's descendant, Kaifa Dennis, settled in the U.S. in 2018 after moving back and forth for many years between jobs in Liberia and Washington, D.C. He is a writer and historian who worked in health care administration in Monrovia, the Liberian capital.

Dennis started looking for more information about Freeman as he worked on a screenplay about Liberia. Freeman had served as a professor and president of Liberia College, now the University of Liberia.

Dennis' cousin, Robert Dennis, made the trip to Rutland for the statue's dedication in May. Robert, a Washington, D.C.-area lawyer who competed with the Liberian track team in the 1996 Olympics in Atlanta, said the family had long known some of their ancestor's history, but they didn't realize he'd been born in Rutland. Nor were they aware of Middlebury College's Anderson Freeman Resource Center.

The center serves to address "the unique social and cultural concerns specific to students of color" and others who have been "historically underrepresented or marginalized in U.S. higher education," according to the college's website.

"Through this experience, we found out about our sixth great-grandfather Pearson fighting in the Revolutionary War," Robert said. "It's kind of awe-inspiring."

The two cousins also learned more about Vermont, a place neither had really thought much about before.

"The only thing I knew about Vermont before this was Bernie Sanders," Kaifa said.

The pair's large extended family — located in Liberia, around Washington, D.C., and in Atlanta — is now establishing a scholarship for minority students from the Rutland area who attend Castleton University or Middlebury College.

"Of course, Martin was someone who was definitely a star on the family tree," Robert said. The rest of the family is now interested in learning more about where Freeman came from. "We would like, once COVID settles down, to make something of a pilgrimage" to Rutland, he said.

Kaifa is taking his own pilgrimage a step further. Through conversations with Rutland Sculpture Trail organizers, he got to know some local leaders, including Marie Pavini, a physician who runs a medical device company called Healthy Design. She had been looking for a business development manager. Kaifa, who has an MBA from Howard University, landed a job with the Rutland-based company; he starts on August 2.

Costello and others are helping him find a place to live.

"Something in my gut was telling me I should go for it," Kaifa said. He feels a strong connection to Freeman and to the story of a country founded by former slaves.

Traveling to an unknown place in Africa took courage and determination, he said. "They went through a lot," he said. "How they survived to have me here today is something I really appreciate."

As for Vermont, Kaifa quickly learned of its demographic makeup — mostly white — and contacted the local NAACP chapter to learn more about what it's like to live in Rutland. His wife and daughter plan to follow him later.

"The people whom I have met have been so kind and nice and welcoming," he said. "The only thing I was concerned about was the cold weather. But if my ancestors could survive it back then, I'm sure I can survive it now."

The original print version of this article was headlined "The Rutland Connection | Kaifa Dennis sought info about a notable ancestor. He found a new home."