Justices for All? Why Vermont Supremes Sit Out So Much | News | Seven Days | Vermont's Independent Voice

Justices for All? Why Vermont Supremes Sit Out So Much 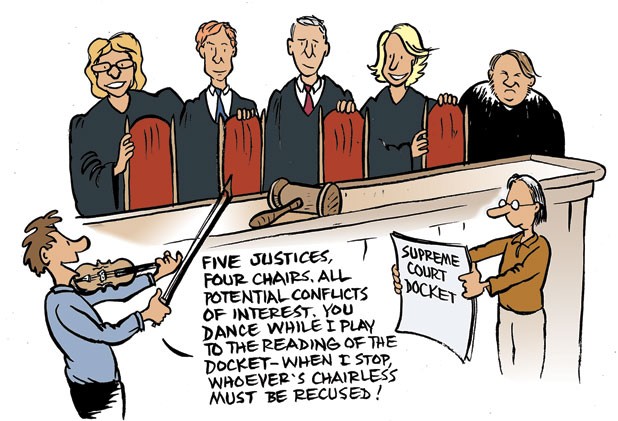 Whoever replaces Brian Burgess as the next Vermont Supreme Court justice will likely spend a good deal of time “on the bench” — in both senses of the term.

Vermont’s top judges recuse themselves with unusual frequency, legal experts say, owing mostly to the state’s small size and the potential conflicts that arise from friendships and past professional associations.

A Seven Days review of public records shows that since January 2012, a justice has excused him- or herself from hearings and rulings 52 times. Robinson leads the pack with 24 disqualifications, followed by 11 for Dooley, nine for Chief Justice Paul Reiber, five for Skoglund and three for Burgess.

While that’s just a fraction of all cases heard by the high court, it’s anecdotally more than you’d see in a larger state, says Vermont Law School professor Cheryl Hanna.

“We have a very small bar here, and we have a lot of lawyers for our population,” Hanna says. “Literally, everybody here is like one degree of separation.”

Guided by the Vermont Code of Judicial Conduct, justices remove themselves from certain cases to avoid any appearance of bias.

“People who come before the court need to feel confident they are getting a fair and impartial hearing,” says Patricia Gabel, general counsel to the Supreme Court and deputy state court administrator. She says a justice might remove herself from a case because she had worked on it previously as a lawyer or because an attorney involved is a friend.

But the public has no idea about why a specific justice sits out any given case. The justices provide no explanation — to each other, the parties or even their own clerks.

“You probably won’t ever find out,” Gabel says.

Burgess, who was appointed by former governor Jim Douglas in 2005, announced last week that he’ll retire his robe on August 1. Shumlin has not suggested who might replace him, but the state’s legal community is abuzz with speculation. A number of rumored candidates — Shumlin chief of staff Liz Miller and Assistant Attorney General Bridget Asay, to name just two — would almost certainly find themselves sidelined at times by the past legal work they’ve done.

At the Supreme Court last week, justices played musical chairs as three of them sat out cases. After oral arguments on a complex drunk-driving appeal last Wednesday, a court clerk announced, “The next hearing of the court will follow a bench change.”

With that, the five justices shuffled out of the room and a court clerk rearranged several of the justice’s name plaques to different chairs. When the justices emerged minutes later to hear the next case, Justice Skoglund was not among them. Serving in her place was Superior Court Judge Robert Bent. Robinson, meanwhile, was sitting four chairs to the left of where she was during the first hearing, and Burgess had moved three chairs to the right.

The seat switcheroo wasn’t as arbitrary as it looked. Justices are seated according to seniority — the chief justice in the middle, the next two most senior justices beside him and the newest ones on the flanks. Trial court judges subbing for justices take the newbie chair.

Dooley disappeared during the third case of the afternoon, replaced by Superior Court Judge Thomas A. Zonay, who listened attentively but said nothing during the 30-minute proceeding.

Why did the Robinson, Dooley and Skoglund sit out last week’s cases? Gabel asked them, at the request of Seven Days, but the answers were only partially revealing. Robinson provided common reasons she disqualifies herself from cases — they touch on issues she dealt with as the governor’s lawyer or involve attorneys with whom she has relationships — but no specifics.

Dooley sat out on last week’s case involving the Rockingham Area Community Land Trust, Gabel says, because he is active in a neighborhood association in his hometown of South Burlington, and the lawyer for that association practices an area of the law that was touched upon in the Rockingham case. In other words, a precedent-setting ruling by Dooley in that case could directly impact his lawyer friend’s livelihood.

Gabel says Skoglund did not reply to a message asking why she recused herself from last week’s oral arguments in a lawsuit brought by the family of a man killed in Rutland in 2007.

In some instances, the reason for the absence is obvious. Last week, Robinson sat out a challenge by St. Johnsbury attorney David Sleigh regarding the governor’s selection of Alan Franklin as the Orleans County state’s attorney. As the governor’s former lawyer, Robinson was involved in that appointment, Sleigh notes, posing a direct conflict of interest. In April 2012, Robinson excused herself from four cases involving clients represented by Middlebury attorney Peter Langrock, at whose firm Robinson worked for years.

In perhaps the most extreme case of justice disqualification, all five justices were removed from a lawsuit brought by Dooley and his wife against a developer seeking to build an apartment complex near their South Burlington home.

But Gabel could offer no explanation for why justices Reiber, Dooley and Robinson all sat out the February 2012 case of Long Trail House Condominium Association v. Engelberth Construction Inc.

Hanna says justices may sometimes have personal reasons for sitting out a case, such as a fiduciary holding in a company that’s party to it. While Hanna feels it’s “kind of weird” that the public is left in the dark, she believes judges deserve their privacy.

“Is it really the whole public’s business that they have a close relationship with the sister of the plaintiff?” Hanna asks hypothetically. “I can respect that we don’t have to know in every case, because then no one would want to be a judge.”

History reveals why Vermont justices err on the side of caution when it comes to the perception of bias. In 1987, three Vermont Supreme Court justices — William Hill, Thomas Hayes and Ernest Gibson III — were embroiled in a scandal when a judicial-conduct board accused them of using their power on behalf of a side judge with whom one justice had a close personal relationship. The justices denied any wrongdoing and only stepped aside after then-governor Madeleine Kunin and others pressured them.

Another possible reason justices play it safe: Unlike U.S. Supreme Court justices, the Vermont Supremes aren’t appointed for life; every six years, they face reappointment by the Judicial Retention Board.

Does it matter that all five judges can’t be present for every case? Every time one is absent, a Superior Court judge or retired Supreme Court justice takes his or her place. Usually, that doesn’t have a big impact on the outcome of cases heard by the high court, observes Hanna. But in some cases the judicial lineup could prove pivotal.

“What if Beth is excluded from the Vermont Yankee case?” Hanna says of Robinson, referring to Shumlin’s effort to shut down the state’s lone nuclear reactor. Whoever replaced her “could change the outcome of the case,” Hanna says.