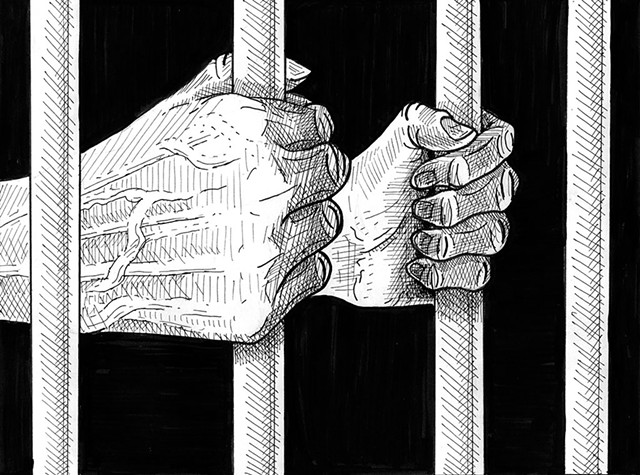 When lawmakers returned to Montpelier in January, one of their top priorities was to reduce the number of people imprisoned by the State of Vermont. They succeeded — but not the way they expected.

The coronavirus pandemic has prompted prosecutors to avoid locking up all but the most serious suspected offenders, and it's led the Department of Corrections to release some inmates who have served their minimum sentences and been deemed low-risk to the community. As a result, Vermont's prison population has dropped nearly 17 percent since January, from 1,678 to 1,401.

Now, lawmakers are hoping to lock in that progress by returning to the criminal justice reforms they began contemplating in January. "Our numbers are down, so let's really put in the effort to keep those numbers down," said Rep. Alice Emmons (D-Springfield), who chairs the House Corrections and Institutions Committee.

Last week, Emmons' committee signed off on legislation that would automatically parole some low-risk offenders upon serving their minimum sentences, provide due process rights to those who violate conditions of furlough and reduce the sentences of those who follow the rules in prison. "We are actually giving these folks some measure of responsibility for their own actions," said Rep. Butch Shaw (R-Pittsford), the committee's vice chair.

The bill, S.338, is one of the few major pieces of legislation not directly related to COVID-19 that has been given priority in the virtual Statehouse since the building closed in March. It's also one of the few new initiatives that could receive serious funding. The legislature is considering appropriating $2 million to house recently released prisoners, provide them more programming and address domestic violence.

The full House is expected to vote on the bill later this week. Because the Senate passed a different version in February, the two chambers would have to resolve their differences before sending it to Gov. Phil Scott.

Whether Scott would sign it is another question. His interim corrections commissioner, Jim Baker, supports much of the bill but viscerally opposes granting new due process rights to furloughed prisoners, arguing that doing so would undermine his department while failing to rehabilitate chronic offenders.

"I understand why there may be a level of mistrust with Corrections, but the continuing scrutiny is going to snuff out innovation and creativity," Baker said. "All we ever do in Corrections is react to the latest oversight coming from the legislature."

Others think the House version of the bill doesn't go far enough in stopping the cycle of repeated returns to prison. Defender General Matthew Valerio, who oversees the state's Prisoners' Rights Office, complained that the legislation had been "significantly watered down" by House Corrections. "In its current form, I don't think you're going to get the savings or the results they're looking for," he said. "But the bill's not done yet, and we hope to make progress going forward."

The legislation has its roots in a six-month, data-intensive study of Vermont's prison system conducted by the New York City-based Council of State Governments' Justice Center. Working with representatives of all three branches of state government, the organization in January proposed a slate of recommendations it said could cut the state's prison population by 135 people and save as much as $14 million over five years. (Some of those savings would be achieved by bringing home many of the 236 Vermont prisoners held at a private prison in Mississippi.)

The initiative, called "Justice Reinvestment II," was modeled after a similar process that took place in Vermont in 2007 and 2008. According to the Justice Center, its recommendations to improve behavioral health and substance abuse treatment programs and to expand access to housing and jobs saved the state millions and prevented its prison population from swelling to 2,800.

The center's latest study was just wrapping up last December when Seven Days published an investigation exposing allegations of sexual misconduct, drug use and retaliation at the Chittenden Regional Correctional Facility, the state's only women's prison. Several of the alleged victims who described their experiences to Seven Days had been in and out of prison for years — trapped in the system not because they were committing new crimes but because they continued to violate the terms of their release. Such infractions, typically referred to as "technical violations," can include losing stable housing, failing to find a job, missing curfew, or using drugs or alcohol.

The Justice Center found that their experience was common, particularly for those taking part in Vermont's idiosyncratic furlough system. In most states, furlough refers to a temporary release from prison to go to work, seek treatment or attend a funeral. In Vermont, it's broadly applied to those who have served their minimum sentences but aren't yet eligible for parole. Originally designed to ease the transition from prison to the community, furlough can have the opposite effect because onerous restrictions often result in released prisoners returning to jail.

Justice Center researchers determined that, over the past three years, 78 percent of admissions to Vermont prisons were the result of furlough, probation or parole violations, while only 20 percent were related to new convictions. During one nine-month period last year, according to the Justice Center, 77 percent of those on furlough who were returned to prison committed only a technical violation — sometimes through no fault of their own — while just 22 percent committed new crimes.

In crafting S.338, legislators adopted several of the Justice Center's key recommendations, including consolidating some of the state's 32 legal statuses for those on supervised release, which include various versions of probation, parole, furlough and home detention. They also added a new one: presumptive parole.

Beginning in January 2021, those who commit nonviolent crimes would avoid furlough and instead be paroled as soon as they reached their minimum sentence, as long as they had participated in prison programming and avoided disciplinary action. Parole is more appealing to inmates because it comes with fewer restrictions and is overseen by the Parole Board, not the Department of Corrections.

In January 2023, presumptive parole would be extended to those who committed more serious crimes, except for what are known as "the big 12" offenses, such as sexual assault and murder.

"It's really moving along those who are playing by the rules," Emmons said.

"It's checks and balances, especially where there's a liberty issue involved." Rep. Maxine Grad tweet this

The bill also restores and simplifies the state's "earned good time" program by reducing an offender's minimum and maximum sentences by seven days for every month he or she avoids major disciplinary action. According to Sen. Dick Sears (D-Bennington), who chairs the Senate Judiciary Committee, previous iterations of the program were so complicated that it took five Corrections staffers to calculate good time, leading the legislature to eliminate it.

The most contentious section of the bill addresses what happens when a furloughed prisoner violates his or her conditions of release. Under the existing system, Corrections staffers can simply send such offenders back to prison without any kind of hearing, review or legal representation.

"The Department of Corrections even has the ability to abuse their discretion with these decisions," said Falko Schilling, a lobbyist for the American Civil Liberties Union of Vermont. "People need to be able to have their day in court before they're imprisoned for something that's not even a crime."

The Senate version of the bill would do just that by allowing those returned to prison for at least 30 days on a technical violation to appeal the decision to Superior Court. The House Judiciary Committee, which reviewed certain sections of the bill at the request of House Corrections, went even further: It recommended letting offenders testify at such hearings and allowing the court to take new evidence.

"It's checks and balances, especially where there's a liberty issue involved. There needs to be a check on all agencies," said Rep. Maxine Grad (D-Moretown), who chairs the House Judiciary Committee. "It's accountability. It's governmental accountability."

During a meeting of House Corrections last week, Baker took umbrage at the proposal. "The folks that we supervise now are extremely complicated, and to take away our discretion to manage that risk is a path that I'm afraid is not a wise move," he said. Involving the courts in the process, he argued, would "add another layer of bureaucracy inside our agency" because his staff would have to manage appeals.

In an interview, Baker said he supported many elements of the bill, including the reinstitution of earned good time and the creation of presumptive parole. But he complained that the legislation focuses solely on Corrections and fails to address the systemic challenges offenders face when they reenter the community — many of which are outside his department's control.

"So we're gonna further scrutinize Corrections but not scrutinize the rest of the system that is setting Corrections up for failure," the commissioner said.

Shaw, the vice chair of House Corrections, said that, in ordinary times, the committee likely would have resolved the furlough appeal dilemma by talking it out in an informal setting. But because the coronavirus pandemic has forced lawmakers to legislate by Zoom, he said, it has been harder to reach consensus.

"If we were in the building, we'd all have cafeteria time," Shaw said, referring to the Statehouse venue known to host such conversations. "We'd sit around and hammer out a deal between the advocates and agencies and legislators on the panel and come together to make a decision. Well, we don't have that luxury right now."

In the end, House Corrections adopted House Judiciary's furlough appeal proposal but delayed its implementation from January to July 2021 — a result that pleased nobody. In the meantime, a working group would be charged with studying the plan. If it comes up with a better one, the legislature could revisit the proposal next session. "It gives us a check-in before it goes live," Emmons explained.

The House committees punted on other controversial elements of the bill. At the request of county prosecutors, they removed a provision allowing those on probation to reduce their sentences with good behavior, choosing to study the idea instead. They also eliminated a section that would have paroled those over 65 who had served at least five years. And though the Justice Center had called on the state to improve its data collection, particularly around racial disparities within the criminal justice system, the bill merely tasks another group with studying the issue.

"It's time to stop studying what data we need to collect, and it's time to start collecting it," said Schilling of the ACLU.

"From our perspective, Vermont's leadership has been just really incredibly impressive in their ability and their commitment to focusing on these issues in the middle of a pandemic and public health crisis," she said.

The original print version of this article was headlined "Justice Served? | Vermont considers corrections reforms to shrink its prison population"