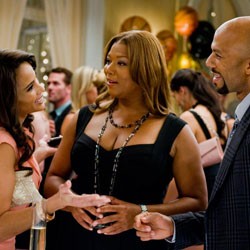 I went to Just Wright because I thought it would be interesting to see Queen Latifah play the lead in a romantic comedy instead of the heroine’s sassy best friend or some other finger-wagging comic relief. It’s not. The filmmakers have made Latifah a more feasible (in Hollywood terms) romantic interest by watering down her sauciness, and the result is one of the more tedious films in a genre that doesn’t lack for competition.

Director Sanaa Hamri and writer Michael Elliot work from one of the tried-and-true rom-com templates: Nice person meets desirable mate. Desirable mate falls for gorgeous, shallow person instead of nice person. Nice person spends rest of movie diligently proving self to desirable mate, whereupon desirable mate realizes he or she has been overlooking the true love right in his or her backyard.

Trust me, I didn’t just reveal anything you couldn’t have figured out by watching the trailer. Latifah plays the eponymous Leslie Wright, a Jersey girl, physical therapist and basketball fan. She has a warm, relaxed presence, and even her quirks reveal what a good person she is — like the beater she drives because it reminds her of her dead grandpa. Graduating to leading man status, Common plays New Jersey Nets star Scott McKnight, a celebrity who’s likeable and down to earth. When he and Leslie meet cute at a gas pump, they discover they both love jazz as well as b-ball. What could go wrong?

Well, for one thing, Leslie is 35 and plus-sized, and pro ball players’ wives are expected to have a look. Unlike most romantic comedies with an “unconventional” heroine, this one never mentions her size. Whether we have Elliot or Queen Latifah’s clout to thank for that restraint, it doesn’t change the plot’s inevitable course. When Scott meets Leslie’s lissome godsister, Morgan (Paula Patton), he instantly relegates Leslie to “home-girl” status. Never mind that Morgan is a gold-digging slacker simpering her way into his wallet via his heart. Do I need to tell you that the worm turns when Scott suffers a career-threatening injury and requires the services of ... a physical therapist?

You know what would be cool? To see these stock characters reveal their motivations sans social repression and self-censoring, the way people did in Ricky Gervais’ The Invention of Lying — a film that featured the same plot with the genders reversed. Nice guy Gervais pined for out-of-his-league Jennifer Garner while she fell for Rob Lowe, but all three openly admitted that their romantic choices were guided by a Darwinian desire to secure good (read: skinny and smart) genes for their offspring.

Gervais’ view of the world may be cynical, but it applies surprisingly well to the simplistic world of romances like this one, where a good-hearted fellow invites a lying, scheming shopaholic into his life just because she’s hot, then has to suffer before learning the error of his ways. (Or maybe he really just learns that, as inheritable traits go, a great personality is more important than a wasp waist.)

Latifah and Common have an easy, genuine chemistry that makes them a plausible pair. But Hamri nudges us way too hard to root for them by cutting to oh-no-she-di’n’t reaction shots of Latifah whenever Patton starts in with her temptress’ wiles.

In real life, more romances are derailed by personality friction than by evil third parties. People seldom make cut-and-dried choices between physical and spiritual compatibility. More importantly, though, this is a romantic comedy without anything approaching a funny joke — and that’s just wrong.