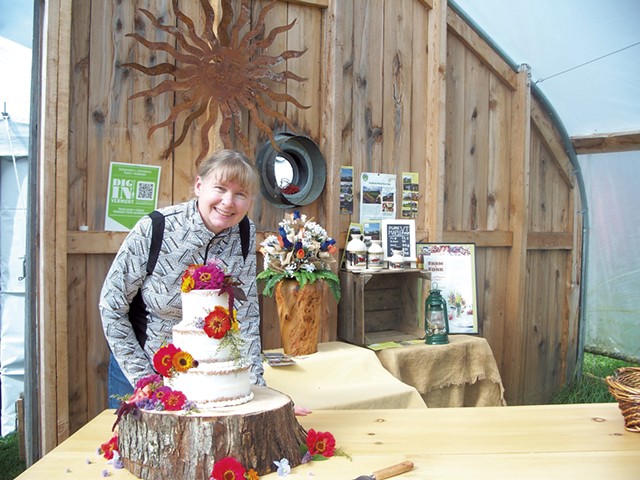 In her 27 years of baking cakes and other desserts at Snaffle Sweets, June Banks has seen Duncan Hines boxed cakes give way to vegan confections. She has witnessed a fondness for wedding cakes decorated with elaborate flowers and piping fall away in favor of cakes whose icing looks like spackle.

"I changed with the trends," said Banks, who is retiring from her baking career and closing her shop at 287 East Main Street in Richmond as of November 1. "A long time ago, I tried to do locavore, and nobody wanted it," she recalled. "'Vegan' was not a word."

Yet, as trends changed, a consistent and gratifying thread ran through Banks' work: the smiles she received when customers saw their cakes. "People are so pleased!" Banks said. "And they taste so good."

Banks was mostly a "one-woman show," she said. She took orders and managed bookkeeping, handled marketing and advertising, and designed, baked, decorated and even delivered her custom cakes. Oh, and she washed the dishes, too — including 18-inch cake pans.

"That was my least favorite part," Banks said, noting that it took about two days to make a wedding cake.

Banks estimated that, over her baking career, she made about 2,500 wedding cakes and 5,000 cakes for birthdays and other special occasions.

She has decorated cakes in the Boston Bruins' black and gold and the New England Patriots' red and blue; she made a winter scene with snowflakes and a snowman for a 4-year-old boy named Max. Recently, she said, she baked a cake that her 22-year-old son, Travis, really liked — a red-velvet one with mint icing.

As she retires from baking, Banks said, she will keep busy with other projects: giving riding lessons, driving the shuttle for the Sheraton Burlington Hotel and working at banquets there.

The original print version of this article was headlined "Sweet Goodbye"