A Frost Heaves forward works on his swish - and swish pan 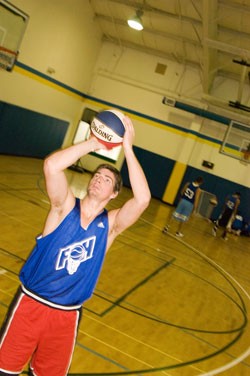 Nelson, 31, is a new member of the Barre- and Burlington-based basketball squad, which won the 2007 American Basketball Association Championship. Most afternoons, the 6-foot-6-incher can be found working his finesse game in the “paint” — Nelson’s coach, Will Voigt, calls him a “tough-nosed” competitor. In the evenings, however, the b-baller sits at his desk making “vlogs” for two popular digital video websites.

Take www.bottomunion.com, Nelson’s personal site, which hosts a whimsical assemblage of haunting vignettes. “Tumbleweeds” is a time-lapse montage of standing pools and flower petals that clocks in at under a minute, with those pastoral visuals accompanied by a sweet, albeit slightly mechanical, vocal melody — think Mario Brothers meet Addams family. Coach Voigt, who’s seen some of Nelson’s vids, calls them “abstract, yet unique.”

In an age when even our blandest public figures — mainstream presidential candidates, say — post footage of themselves online, the video blog is no longer an offbeat enterprise. But Nelson has been “vlogging” since before it was cool; he founded Bottom Union in 2003, pre-YouTube.

Nelson’s vlog and basketball spheres don’t mix much, but it was a hoops-related mishap that propelled him into the world of video. Originally from Pittsburgh, Nelson attended the University of Vermont, where he played basketball and double-majored in English and art. After graduating in 1998, he and his future wife Priscilla moved to Holland, where he would play professional ball for nine years. Nelson kept up with his creative pursuits, but he struggled to synthesize his interests in writing, painting and photography, he says. When his ACL ripped in 2004, the accident came at the peak of a “mini artistic crisis.”

“I was on my butt, not practicing, not really playing,” Nelson recalls of that episode. “I was into film, and I’d just bought a digital camera. I started doing a lot of videos, and then it became possible to share on the web . . .”

At first, Nelson says, he exchanged videos with a handful of fellow vloggers around the world — this was before the rise of social networking sites such as YouTube and MySpace. In those early months, other vloggers inspired him to create pieces that were “playful” and “experimental,” Nelson recalls. He calls his current vlog technique “absurdist” and “devious.”

In March, Nelson co-founded a site called www.wreckandsalvage.com with two fellow videographers he met online. Wreck and Salvage — where the videos are presented as collective efforts, without attribution to a particular member of the trio — showcases work doused in social commentary and morbid humor. For example, it features a roughly two-minute animated adaptation of Franz Kafka’s short story, “The Metamorphosis,” in which a robotic Gregor Samsa finds himself transformed not into Kafka’s giant insect but into a plastic doll with “supple living skin.” “I feel like a pressurized bag of jelly,” he laments.

Some Wreck & Salvage vlogs are even weirder — and more hilarious. In Nelson’s “Suppendapo (One Dead Mule),” we hear the voice of a businessman named Dwight placing a phone order with an all-purpose supply warehouse. “Last week’s shipment was perfect, as always,” he begins, “but I have another order for you.” Among Dwight’s requests? “Thirty pairs of safety scissors, 119 units of type B-negative human blood, one wide leather belt and 42,000 old-growth pine trees — at least 40 feet tall, at least 1 foot in diameter.” Oh, plus a dead mule.

In the style of “Mule,” most Wreck & Salvage efforts are short but packed with symbolic significance. “A lot of times, I try to start with a concept or something I think is relevant, whether it’s within my life, or within the world, or anywhere,” Nelson explains. “Then I try to reduce it to under two minutes.” That’s partly because a typical online audience tunes in during “spare moments,” or “void time,” rather than for extended couch sessions, as it would for a television show.

Adam Quirk, 28, one of Nelson’s two Wreck & Salvage co-founders, defines the company’s approach bluntly. “We kinda try to disassemble things and build ’em up from scratch, like rebuilding engines, I guess,” says Quirk, a musician and freelance videographer from Brooklyn who created the Kafka adaptation on the Wreck & Salvage site. “But also, we try to make things timelessly instead of just topically funny.”

While Wreck & Salvage vids often feature animation and other sophisticated image manipulation techniques, Nelson tends to use more shot-on-the-fly or “found” video on his personal site. “Most of the time, I try to shoot very minimal,” he says, reflecting that he likes to place “apocalyptic” realities of modern life into comic relief. “It’s basically trying to put videos together the way life happens,” he adds. “You find out that as you edit, you don’t really need a concept or a narrator — life does it for you.”

That manifesto comes through loud and clear in “Random Northwest,” Nelson’s aptly titled, nonlinear travelogue of a 2005 trip to Oregon and Washington state. The film jumps back and forth among random passengers on a ferry, a merchant, a locksmith, a used-car salesman and a wayward moose who traipses through a parking lot. “With ‘Random Northwest,’ it was really just taking all these moments that, relatively, had nothing to do with each other,” Nelson recalls. When he was done “editing it instinctively,” he adds, “it makes sense — I guess.”

Like text-based websites back in the 1990s, sites devoted to video and video sharing have mushroomed in the past couple of years, triggering a digital version of natural selection. But Wreck & Salvage has survived, and even thrived. Nelson reports that the collective’s artsy, politicized pieces have actually grown in popularity since 2004, thanks largely to such YouTube-like aggregator sites as www.vimeo.com and video.yahoo.com.

“When we started, you wanted your videos to only be seen on your website,” he says. “But at the same time, that was a waste, because each video-sharing site has its own audience, so why would you expect people to come to yours?”

Partly because of increased web traffic, what was formerly a leisurely pursuit has morphed into a money-making enterprise. Quirk reports that Wreck & Salvage now sells commissioned vlog advertisements; at present, the site’s only clients are a T-shirt company and a vodka manufacturer, but Quirk says he’s meeting regularly with other businesses to discuss potential commissions. Nelson sees his partner two or three times a year in New York City on his way to visit family in eastern Pennsylvania. (Aaron Valdez, the third member of W & S, lives in Grand Rapids, Michigan.)

That spatial disconnect poses a question: How can Nelson keep one foot in the New York art world — Quirk’s sphere — and the other in a b-ball court in, well, the boonies? That’s the upside of today’s open-source media climate, points out Quirk: Though it may iron out regional differences, it also allows artists to communicate and collaborate across physical boundaries. It doesn’t matter where Nelson lives, so long as he keeps a razor-sharp eye trained on American culture.

“Erik’s good at really subtle humor that a lot of people probably miss,” Quirk suggests. “And it’s not even humor sometimes — it’s just [that] he points things out, holds a mirror up to the world, up to modern media, and shows the ugly side of it. He takes the mundane and shows the beauty in it.”

The three company founders “have all been influenced by decaying industry, rust, the dregs of society,” Nelson says. “It’s all stuff we’ve grown up with, and I guess we’re all revealed by what media has influenced us.”

Quirk agrees. “I’m living in Brooklyn in a pretty cool neighborhood,” he says, “but I grew up in a similar town as Erik — small, Midwestern, hardworking values. So, yeah,” he concedes, “I guess that’s where our aesthetic comes from.” Quirk adds that, someday, he might relocate to Vermont or some comparable location within “striking distance” of the Big Apple.

As for Nelson, this Vermont landscape suits him perfectly. The power forward-cum-vlogger and his wife Priscilla recently purchased land in Duxbury, where they plan to build a house. Former college sweethearts, they’re raising two adorable girls, ages 1 and 3. Are the kids into vlogs? “Quinn’s too young,” Nelson says with a grin. “But Tanum likes watching old Spider-Man cartoons from the ’60s on YouTube.”

Given such a sweet set-up, you’d think Nelson would want to combine his two passions: basketball and videography. But artists can be unpredictable, and this one stays surprisingly mum when it comes to reflecting on the interface between hoops and screen. “I made a couple of basketball videos at Bottom Union,” he recalls, watching Issa Konare sink a three-pointer. “But, yeah, I have a hard time meshing the two. I’ve always kept them separate.”

That doesn’t mean he keeps his online life secret on the court — especially not from Voigt, 31, his wiry, dark-haired coach. Voigt knows a thing or two about the creative process: He used to study classical piano, and his mom, Ellen Bryant Voigt, is a former Vermont State Poet.

“Certainly, I can relate to the arts,” Voigt says. “I think it’s good to see that these guys have another side to them.” Other Frost Heaves players, he notes, have reveled in chess and poetry. “And as people,” adds the coach, “[Erik] and I can relate to things outside of basketball.

“The state motto is ‘Freedom and Unity,’ and I think that’s what describes basketball the best,” he continues. “You need to have the cohesiveness of five guys on the court, but the beauty of it lies in the free-flowing play, and the [opportunity] for these guys to be creative. Obviously, the Michael Jordans and the Larry Birds and the Magic Johnsons were artists — they put their own unique spin on the game.”

Even Nelson admits that b-ball and videos come from the same source. “There’s a whole lot of creation and improvisation in basketball, so it’s not like they’re two separate things,” he says, glancing anxiously at a wall clock. It reads 3:30. Racket from dribbling balls is flooding this gym, and Nelson’s eyes begin to stray toward a far rim, under which Konare and other teammates are assembling for lay-up drills.

“It’s the same brain,” he adds hurriedly, before rising from his chair. “It’s not like I’m shutting one off and turning the other on.”