Julie Davis on Winter Plein Air Painting, What to Wear and the Allure of Mount Mansfield 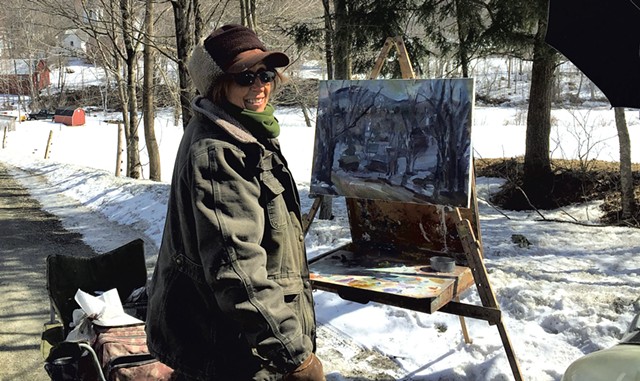 Julie Davis is "driven to paint," she said, insisting that subject matter is less important to her than the act of applying brush to canvas. Still, the majority of her paintings are plein air landscapes. "I love to be outdoors," she said simply. But also, Davis reasoned during an interview at her Cambridge home, "it's easier to get more immersed, and it's less distracting if you're outside."

She compared the plein air practice to going fishing: You load up your car with gear, snacks and appropriate clothing and head out for a few hours, maybe a whole day. You leave behind the seductive diversions of a household and the endless clamor of digital communications.

"Sometimes your canvas goes flying away." Julie Davis tweet this

Winter complicates things, particularly in the clothing department. Davis showed a reporter her thick "guy boots" and her coveralls, along with her Take It Easel and a passel of paints and brushes.

Davis, 64, hadn't planned to be an artist; she started painting in her thirties and is largely self-taught. She was born in Barre — the middle child of nine — into a family better known for politics: Her father, Thomas C. Davis, was a longtime staffer for Sen. Patrick Leahy; her grandfather, Deane C. Davis, was the governor of Vermont from 1969 to '73. 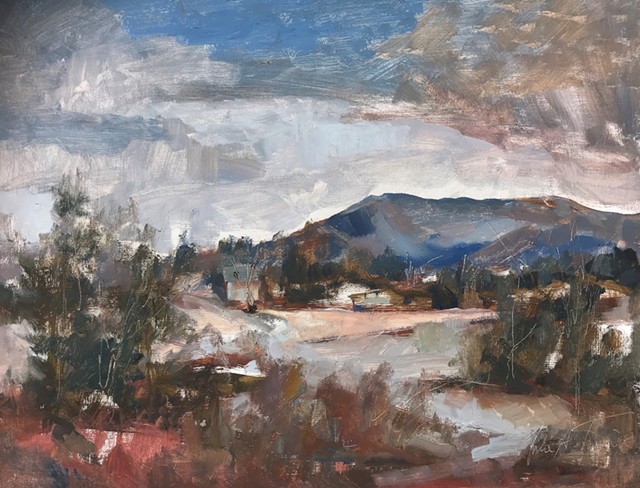 Julie Davis earned a master's degree in public administration at the University of Vermont and lived and worked in Burlington for 30 years. Her day job now is grant writer for the River Valley Workforce Institute, based in Lebanon, N.H.

In 2017, Davis bought her circa 1880s farmhouse on a rural road in Cambridge. The house itself — rebuilt in 1920 after a fire, she said — is charming and has a bazillion-dollar view of Mount Mansfield. It would surely sell in a heartbeat in Vermont's fervid real estate market.

But Davis isn't going anywhere. She moved to Lamoille County in large part for the landscape — that is, to paint it. Her attraction is far from unique; the area around Mansfield, she said, is one of the top New England destinations for plein air painters.

Even with that majestic vista behind her house, Davis frequently piles her painting gear in her Subaru Crosstrek and hits the road, sometimes driving around for more than an hour, she said, to find a new site.

On the occasion of this week's Winter Preview Issue, we asked Davis about her artistic practice in the coldest season. 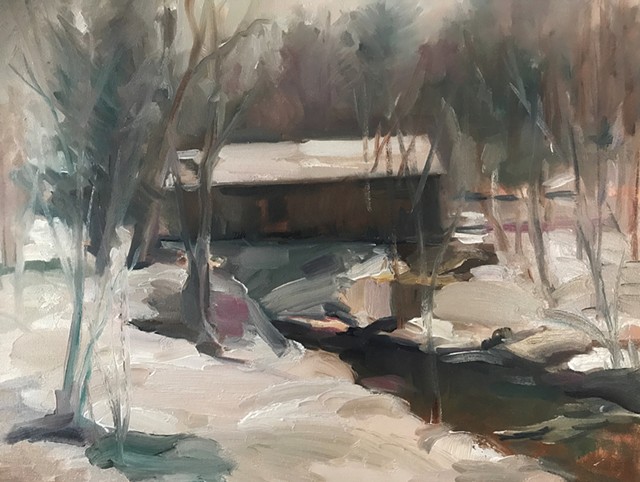 How often do you go outdoors to paint?

I go out all the time — at least twice a week. You go out as much as you can when the weather is good.

Do you always set up an easel, or do you sometimes take a bunch of photos and then paint at home?

No photos. I don't have anything against it, but outdoors, you hear the birds and the river — it puts you in the mood to capture what's there.

Tell me about your process.

The first thing is to really get connected with something in the landscape. It's not, I'm going to paint that bridge; it's more about how the light hits the side of the bridge. Once I get charmed by something, I'm totally immersed.

What kind of paint do you use?

How do you protect a finished painting?

With that stunning view, you could just stand in your backyard to paint. How far afield do you usually go?

I paint in an area close to home. I also moved up here because of Vermont Studio Center [in Johnson]. I have a pretty big studio practice, too, [working on] things from my head. 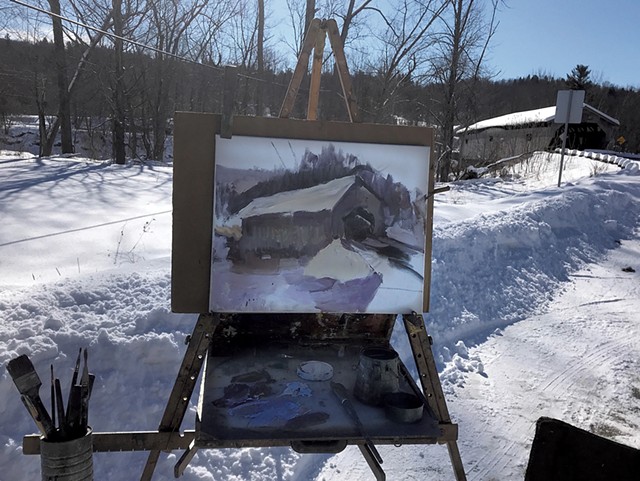 I have painted in 15 degrees. I don't like doing that, but it's a fun creative challenge. Usually, it's between 20 and 30 degrees — kind of like skiing weather. It's also quieter in the winter, so you can really concentrate.

What do you wear?

Footwear is the most important consideration. Coveralls if it's really cold. I wear two hats: a hunter hat with a visor and another hat over it, so it's really warm. Layers!

I'm sure you always check the weather, but have you ever been surprised by a sudden rain or snow squall or wind?

Yes. Wind is the worst. Sometimes your canvas goes flying away. Rain isn't too bad if it's not too hard. I can stand under the [open hatchback] car door.

How do you know when a painting is done?

I used to always ask myself that question, but now I just know. Sometimes I keep going, though, and I might ruin that freshness.

Do you usually go out painting alone or with friends?

I go out alone more than I used to — partly because I live out here. Also, I used to need more support from other artists.

Do you paint the same spot more than once?

I guess I've never done it.

Just cows. Once in a pasture, [some cows] gathered around me. Someone told me they're attracted to linseed oil. I might have seen a mink once, and I did have a bird splat on my palette. But, generally, I'm not near a wild area. I like to be no more than 20 feet from my car for safety.

The original print version of this article was headlined "Cold Play"